Above: The only other photo I’d seen of the vault showed only one cross in the background, which I thought was the main one. Which is why I thought the vault was positioned to the left.

Another recently discovered photo (below) has shown just how easy it is to reach the wrong conclusions when there’s no hard evidence to back up long-held beliefs.

Last week I discovered that the Grimshawe’s family chapel wasn’t where I thought it was – in the top-storey turret of Errwood Hall (click to read). The previous week it was that Errwood Hall hadn’t been a youth hostel in the years between Mary’s death and its demolition (click to read).

And now it seems that the family’s hill-top vault wasn’t where I thought it was – on the flat area to the left of the graves. It was right in the centre of the cemetery.

Above: This recently discovered photo held all the clues. Click either button, or drag the green slider, to view then and now images.

It was the concrete path going up to the vault door which made me wonder whether I’d been wrong as there are still some remains of this left on the ground – leading up to the central cross.

Comparing the view of the other crosses in the background confirms that the building did once lie where the main memorial stands today.

Bricked up and sealed

Given the wealth of the Grimshawe family, people have often wondered whether there might be valuable items buried with their bodies. This is taken from a newspaper article published in 1943 (click to read it in full)…

“I wish to state quite emphatically,” he told a ‘High Peak News’ reporter, “that the vault is undisturbed, and unlikely to be entered either by vandalistic hikers or by over-enterprising schoolboys.

The vault was bricked up and sealed, at the request of the Grimshaws, and it would be impossible to penetrate it in any way without a great deal of demolition work being done. This would be out of the question, as a member of the waterworks staff patrols the area continually.”

I doubt anyone still patrols the area but it sounds like it would take some serious machinery to penetrate the graves. And any prospective grave-robbers would soon be heard and discovered!

Page update: 30th March 2022; Chris has managed to find this wonderful description of the graveyard, written by Porteous Crichton in 1954, on the Whaley Bridge Local History website…

On a quiet knoll behind the hall the private burying-ground had received dependants as well as members of the family.

One stone commemorated a seaman, aged fifty-five, who for thirty years had been captain of Grimshawe’s yacht ; another stone, a Frenchwoman, presumably a governess – a strange place, this wild glen, for her to die in, so far from her native land. The last stone was dated 1911, to a gamekeeper, Pownall, who is remembered to have been very well off, having been left £1,000.

Any tenant or worker on the estate had the privilege of being interred there. Privilege it must have seemed when the estate was flourishing, though somewhat different now – a forgotten place, with crosses atilt, the graves lost under weeds, and the little burying-house, which held a tiny altar and a series of old tiles depicting the Stations of the Cross, desecrated.

The whole railed space, when tended carefully, seemed to speak of a very benevolent despotism.

Page update: 31st March 2022; Many thanks to Chris for the comment below, and for sending the 1954 description by Porteous Crichton above. I hadn’t realised that there must have been two entrances to the vault.

One from the north – between the avenue of yew trees – into the below-ground vaults where the coffins would have been interred. And the above-ground door shown in the photos which led into a small chapel which Porteous says “…held a tiny altar and a series of old tiles depicting the Stations of the Cross, desecrated.”

Perhaps on the area where I previously thought the vault must have been (just beyond the fencing on the photo below). Or further behind, on the highest point of the hill (circled), where again it looks as though the ground has been disturbed. But I guess we’ll never know. 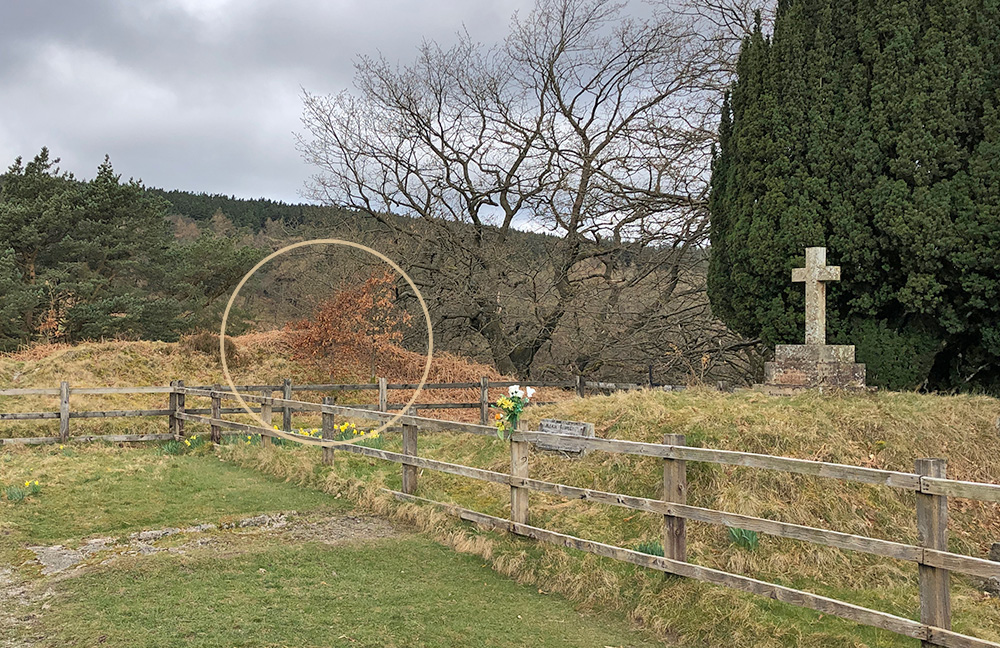