Above: The Grimshawes’ family cemetery lies above the ruins of their grand country house, Errwood Hall.

At one time there was a building to the left, with a vault below, which would have held the coffins of family members (above left).

And it seems likely their remains still lie entombed within its secure, underground walls. 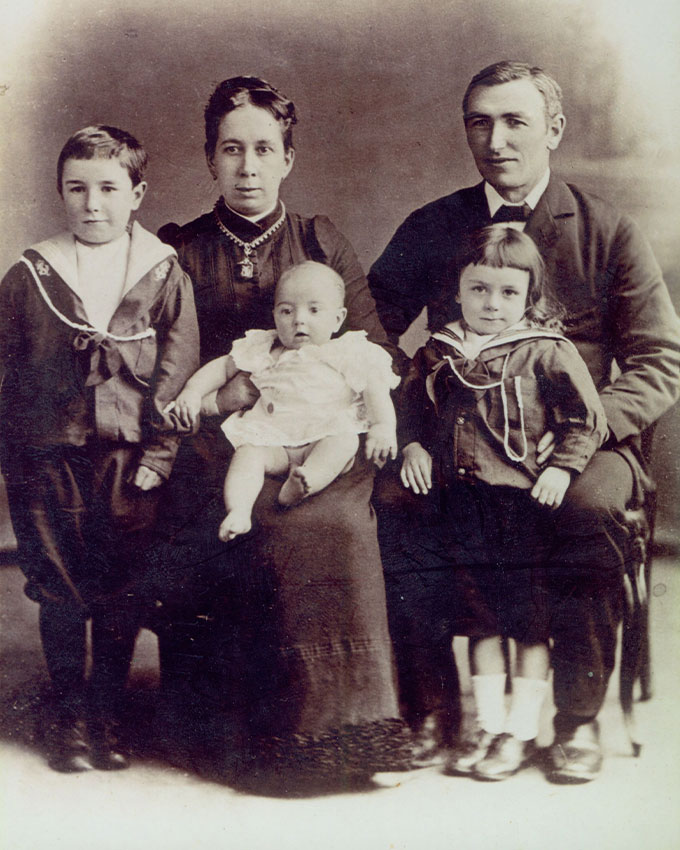 Above: Ignatius Oyarzabel was Head Butler to the Grimshawe family. His wife, Bridget, taught at the small school which lay just behind their home, Errwood Cottage.

I’d guess this photo dates back to the early 1900s. So perhaps the Mr Oyarzabel quoted in the 1943 article could be one of the children shown here.

Here’s another little gem from the Whaley Bridge Local History forum, recorded by R. S-S. The article was published in the 3rd April 1943 edition of the High Peak News.

A rumour which has circulated in Whaley Bridge recently that the vault at Errwood Hall, in which members of the well known Grimshaw family are buried, had been broken into by vandals, was denied this week by Mr Oyarzibel, of the Stockport Corporation Waterworks, who is in charge of the Goyt Reservoir estate on which Errwood Hall stands.

“I wish to state quite emphatically,” he told a ‘High Peak News’ reporter, “that the vault is undisturbed, and unlikely to be entered either by vandalistic hikers or by over-enterprising schoolboys.

The vault was bricked up and sealed, at the request of the Grimshaws, and it would be impossible to penetrate it in any way without a great deal of demolition work being done. This would be out of the question, as a member of the waterworks staff patrols the area continually.”

The rumour arose, apparently, because a group of local people who were in the vicinity of the Hall recently noticed that the porch above the vault had had its roof broken in, making a hole, in the words of one of them, “big enough to put a bullock through.” This, it was assumed, opened directly to the vault.

Mr Oyarzibel took the opportunity of denying the stories that the bodies of the Grimshaws in the vault are embalmed in glass-topped coffins, and that the corpses still wear the gold watch chains, and so forth, which they wore when they were alive.

The bodies, he says, are not embalmed, but are buried in coffins of shell, lead and oak. And the coffins contain no valuables.

He is in a position to know, for as the last remaining member of the Grimshaw household he saw the coffins laid in the vault and himself helped to seal the vault when the Goyt Valley was acquired by the Stockport Corporation for flooding.

Nevertheless, there has for some time been evidence of unnecessary vandalism and interference at the Hall on the part of hikers and schoolboys. The chapel has been entered, and many windows of the hall have been broken. 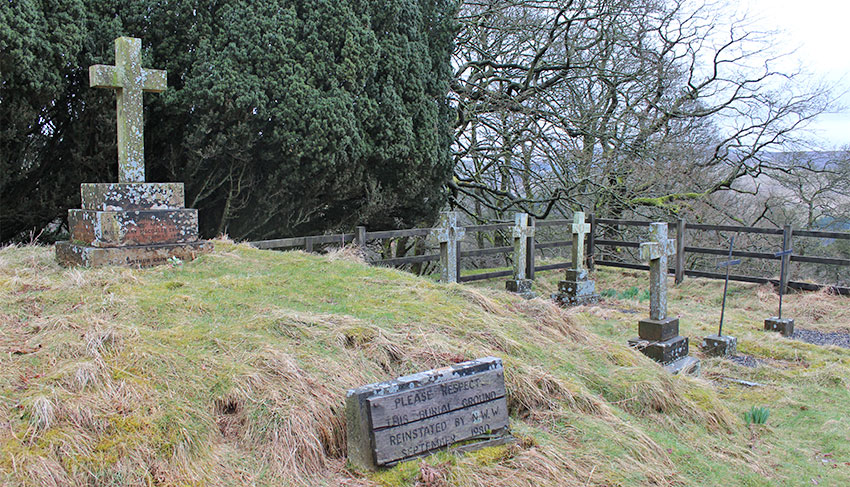 Above: Today the graveyard is protected and respected. Which doesn’t seem to have been the case back in 1943!

The graveyard round the chapel, where members of the household were buried, has been trampled on and crosses over the graves have been overturned. The railings round the graveyard have been pulled down.

It is likely that in the near future Stockport Corporation may make new arrangements for preventing this kind of thing from going on.

The Hall, where for nearly 100 years the Grimshaw family lived, wielding an enormously beneficent influence in Whaley Bridge, will eventually be demolished.

Some of the stonework of one wing was used to build the two houses on the estate now occupied by members of the waterworks staff, and window sills and frames were removed for the same purpose. A great deal of timber has also been removed.

The lead from the roofs was removed some time ago to be used for other purposes, with the result that the rain has penetrated, and done damage to the interior of the Hall.

Eventually it will be completely demolished, and the materials used for a variety of purposes, though the site on which it stands will never be flooded.