Above: A wonderful photo taken of Goyt’s Bridge pupils outside their single room, wooden-built school, probably taken in the early 1920s. The tall boy at the back may be Joe Hewitt, son of the Castedge Mine Manager.
There are some reports that the first school for children in the valley was inside Errwood Hall. But this does sound unlikely – unless it was in a building in the grounds of the house. A purpose-built school was later constructed at the bottom of the drive to the hall, behind Gatehouse Cottage. 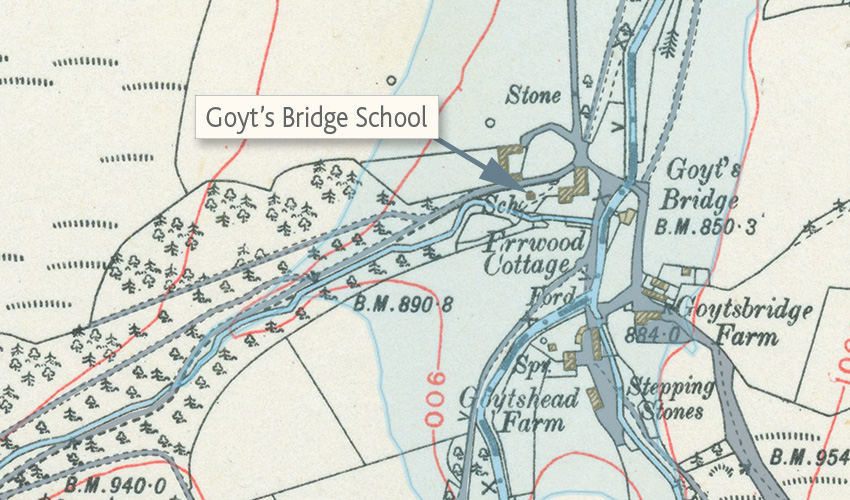 Above: The school is clearly marked on old OS maps of Goyt’s Bridge (click to enlarge). The area now flooded by Errwood Reservoir is shown in blue. 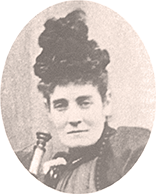 Built towards the end on the 19th century, it was made of wood with a corrugated iron roof. An iron stove stood in the centre of the room, separating the boys from the girls. The school was started at the suggestion of Mrs Dolores (right), the Spanish companion of Mrs Grimshawe.

Mrs Dolores* taught a number of subjects, including needlework. She was helped by Mrs Bridgette Oyarzabal who lived in Gatehouse Cottage with her husband, Joseph, who was the Grimshawe’s estate agent. Following the death of Mrs Dolores, Mrs Oyarzabal continued to run the school for some years. In later years, two more qualified teachers were employed; Mrs Whelan and Mrs Rourke. 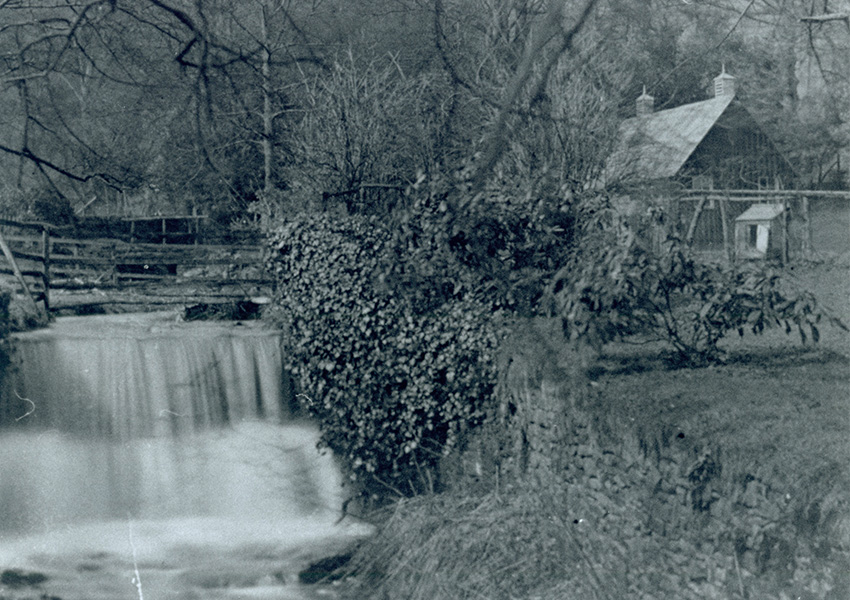 Above: The single-room school at Goyt’s Bridge stood in the garden behind Gatehouse Cottage, alongside a weir (click to enlarge). It also features in the 1932 cine film.

Many of the children would walk some distance from outlying farms to reach the school. It was remembered as being “a happy but strict place where children learned the three Rs”.

As well as classroom studies, the children would go on little excursions in the summer. One favourite trip was up the old Roman road, The Street, then across the fields to visit the small shrine of St. Joseph’s, before calling in at the coal mine on the way back for a lesson on its origins.

The pupils were given cookery lessons twice a week from the chef at Errwood Hall. On special occasions the meal being taught would be cooked for the children’s dinner at Gateway Cottage. Religious services for the children were also held in the Hall chapel, at the top of the two-storey tower.

Gerald Hancock records one special event in his book which was held every year for the children and known as the ‘Shotgun salute’:

On the Feast of Corpus Christi, all the scholars walked in procession from the Grimshawes’ private chapel through the garden to the terrace, where Benediction was given. The great moment came when the Blessed Sacrament was borne through the front doors of the Hall.

The gamekeepers, with other men employed on the estate, fired a dramatic salute with their shotguns, and after the service the children went back to the school for a grand feast, followed by fun and games.

Long after they had left the school, the ladies of Errwood were always interested to learn how their scholars were getting on. At the start of the first World War, a roll of honour was placed on the chapel door bearing the names of all the old scholars serving in the armed forces.

Four of them paid the supreme sacrifice. W. Braddock*, P. Heather, W. Lowe and A. Lupton, while quite a number were wounded.

*Mike has discovered information about William Braddock on the Commonwealth War Graves website. A former pupil at Goyt’s Bridge School, he was a gunner in the Royal Field Artillery and died on 2nd May 1917 aged 30, and is buried at Bailleul Communal Cemetery Extension, Nord.

During this centenary of the Great War, I’d like to include details of all those from the Goyt Valley who made the ultimate sacrifice for their country. So if anyone has any information about those mentioned above – P. Heather, W. Lowe and A. Lupton – please get in touch.

I’ve managed to discover more information on both William Braddock (click here for details) and P (Percy) Heather (click here for details). William was killed in May 1917 aged 30. Percy died at Hell Fire Corner during the Battle of Ypres in July 1915 at the age of just 19. He was one of nine brothers and sisters, all of whom attended the school.