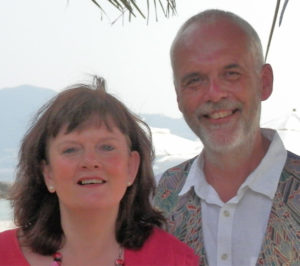 Birds of the Goyt Valley

Andrew and Margaret Gilbert are keen bird-watchers and know the Goyt Valley well. Here, Andrew describes the many species of birds that can be seen and heard in the valley throughout the year.

The Goyt Valley, lying between the ridge running from Shining Tor to Taxal Edge in the west, and the flanks of Coombs Moss to the east, provides a variety of suitable habitats for birds, both resident and migratory. These habitats include heather moorland, grassy meadows and ridges, woodland (deciduous, coniferous, and mixed) and woodland clearings, shrubby areas, streams, rivers, reservoirs, and ponds. 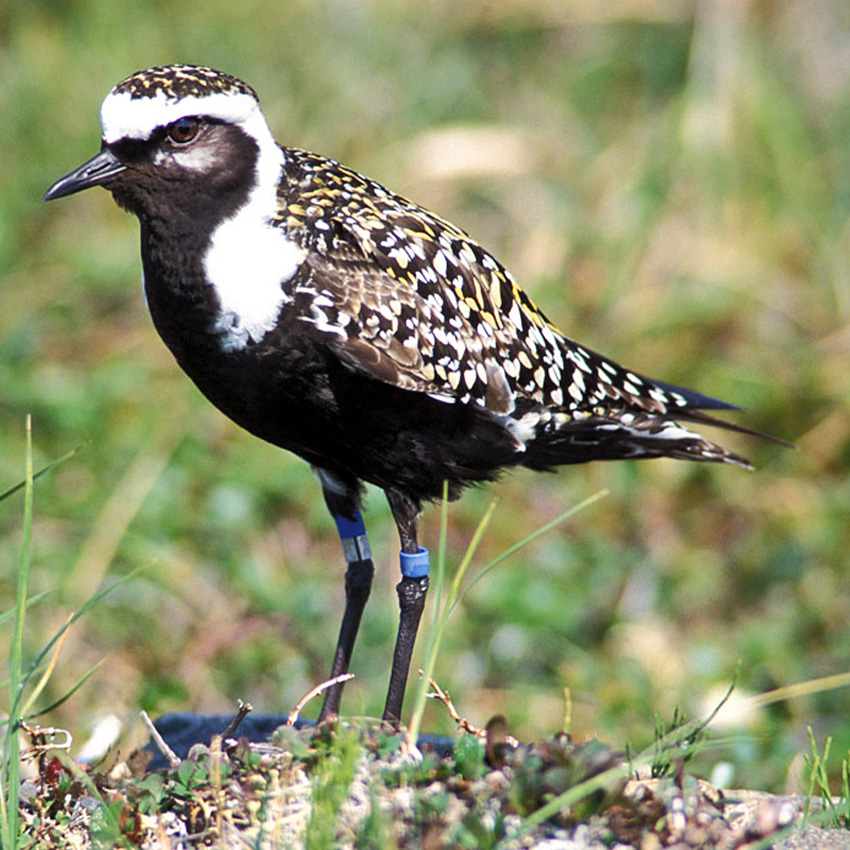 Golden plover can be seen around the valley in spring.

These typically breed in the area and are present all year round.

Tits (blue, great, coal, and long tailed) and finches (chaffinch, greenfinch and goldfinch) can be found in woodland and shrubby areas; siskin and redpoll may also be present and can be found with goldfinch feeding high up in conifers in winter months.

Blackbirds, thrushes (song and mistle), nuthatch, treecreeper, wren, robin, great spotted woodpecker, and jay are found all across the valley, especially in woodland and shrubby areas; other corvids such as crow, rook, magpie, and jackdaw are found scattered throughout the valley.

Raven may also be seen. Heron, cormorant, Canada geese and the ubiquitous mallard are found on the reservoirs, and dipper and grey wagtail on the rivers and streams. Grey and pied wagtail can often be seen on the reservoir run offs. Kingfisher have been found along the stream running adjacent to Hillbridge Wood and in the pond at Taxal.

Common buzzard are seen soaring over the valley, and kestrel hovering over the grassy meadows searching for food. Other raptors include sparrowhawk, peregrine, red kite, and tawny and short eared owl. Red grouse are present on the moors throughout the year and flocks of golden plover can be seen especially in late winter. Stonechat are often present around Bonsal Cob pond.

March to May is the best time for birding in the Goyt Valley, just before the leaves unfurl, as the summer and passage migrants appear. 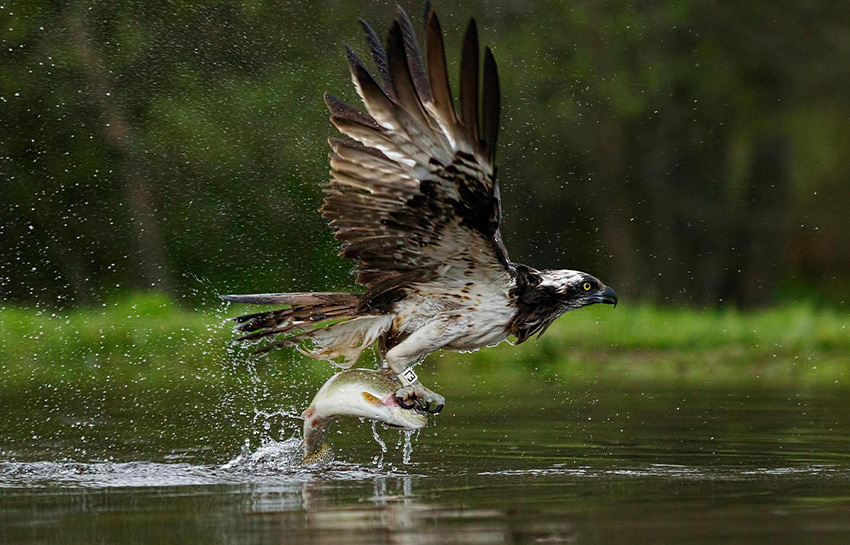 Osprey have been seen in the past fishing in Errwood Reservoir.

Early wheatear can be seen in March on their way north – look along the walls along the Cromford and High Peak Railway (CHPR) track at Bonsal Cob and Goyt’s Lane. Sand martins arrive in late March followed by swallow and house martin in April, then swifts in early May; some may be breeding locally, some passing through.

Osprey has been reported in the past fishing in Errwood reservoir; as osprey populations in UK increase, this stopover in the Goyt Valley may become more frequent. 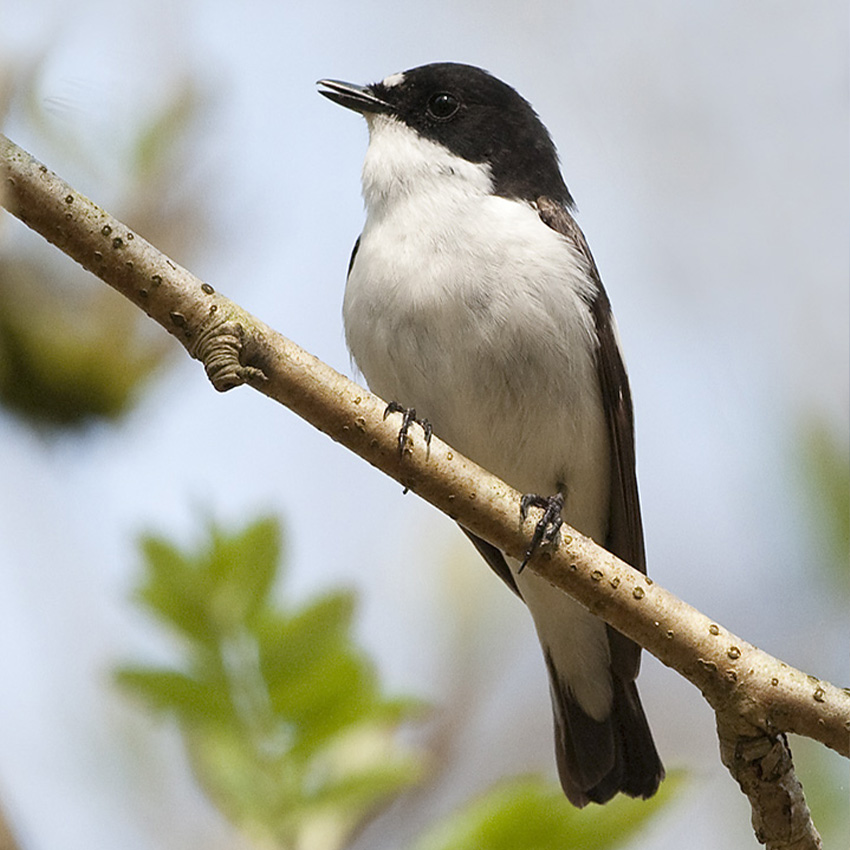 April sees the start of the influx of summer migrants which breed in the valley.

Pied flycatcher can be seen in Hillbridge Wood and by the nest boxes that line the tracks between Errwood car park and the Riverside Walk; redstart can also be seen along these tracks and spotted flycatcher are found in the trees around Goyt’s Bridge (they arrive later than the pied flycatchers).

Warblers return and are seen and heard in trees and shrubs throughout the valley. Willow warbler, chiffchaff, and blackcap are all common  – try the small trees on the east side of the stream below Goyt’s Bridge and the small trees around the Fernilee reservoir parking area.

Golden plover and lapwing gather in April before moving to their breeding sites – try the fields behind the Peak View Cafe – and curlew, with their eerie bubbling call, can be seen and heard on the moors, often calling in flight or on top of dry stone walls. Common sandpiper are found most years along the shores of both reservoirs, and little ringed plover have been reported at Errwood.

Cuckoo can be heard, in both the woods above Shooters Clough and on Hoo Moor. Ring ouzel – the mountain blackbird – nest near Derbyshire Bridge although better views of this bird can be had near the chimney at Danesbower; curlew, lapwing, wheatear and stonechat are often seen at this location.

Meadow pipits are plentiful, and their rarer relative tree pipit can be seen and heard singing from tree tops in the Errwood car park / Riverside walk area – meadow pipits sing during a brief song flight, tree pipits from treetops.

Skylark can be found along the Shining Tor / PymChair ridge – listen for their wonderful soaring song.  Reed bunting can be found around the CHPR track near Bonsal Cob.

Late evening visits to Goyt Valley in late spring and early summer can give roding woodcock from the Errwood car park / Riverside Walk tracks. The males display over their territories just before dark, their call sounds like a croaking frog. This species is resident but late spring is the best time to view.

Late evening may also give churring nightjar in some of the clearings. Short eared owl and tawny owl can be seen hunting over the grassy meadows around Wildstonemoor or roosting in the taller trees lining the valley. 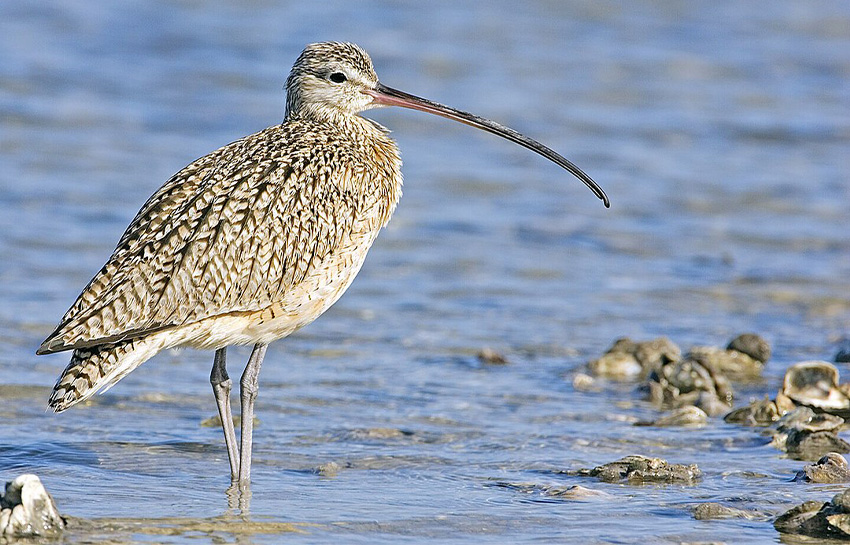 June, July and August see the valley full of adult birds busily feeding their young; look out for families of finches, tits and warblers in the shrubby areas, for example by the parking area for Fernilee reservoir, and in small trees and shrubs on the east side of the stream below Goyt’s Bridge (points 8 – 10 on walk 13).

On the moorland you may be lucky enough to see curlew or golden plover with young. Look out for swallows and martins feeding young on the wires,especially around Fernilee.

During summer months, many of the adult birds are somewhat scruffy in appearance after several hectic weeks raising their young; they undergo a moult to grow new feathers and during this time they tend to hide away to avoid predators.

‘Autumn migration’ – when the spring migrants start to move away from their breeding areas towards their winter grounds – starts in late July / early August; watch out in particular for large groups of swifts and possibly sand martins moving south through the valley.

September to November the spring migrants have largely gone; look out for small parties of wheatear or meadow pipits moving through, again on the walls on the CHPR track near Bunsal Cob and Goyt’s Lane.

Check the overhead wires at Fernilee for large flocks of swallow and martins gathering to feed up over the reservoirs before flying south.

Winter migrants start to arrive from Scandinavia; check the trees above Taxal to Taxal Edge for flocks of winter thrushes – redwing and fieldfare. Brambling may also be found feeding with chaffinch, in particular check flocks feeding on beech mast.

Large skeins of wintering geese – usually pink feet – can be seen and heard, usually early in the mornings. You may be lucky and find migrating whooper swans on the reservoirs.

During December to February the valley is quiet. But most of the resident birds, plus the winter thrushes, can be spotted. 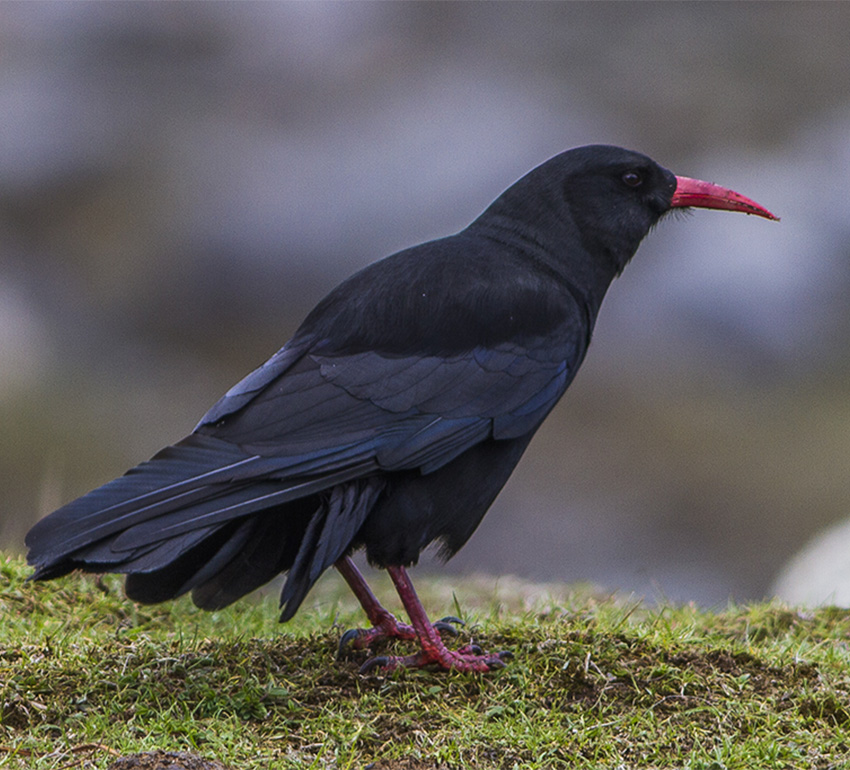 A chough was recently spotted at Windgather Rocks. 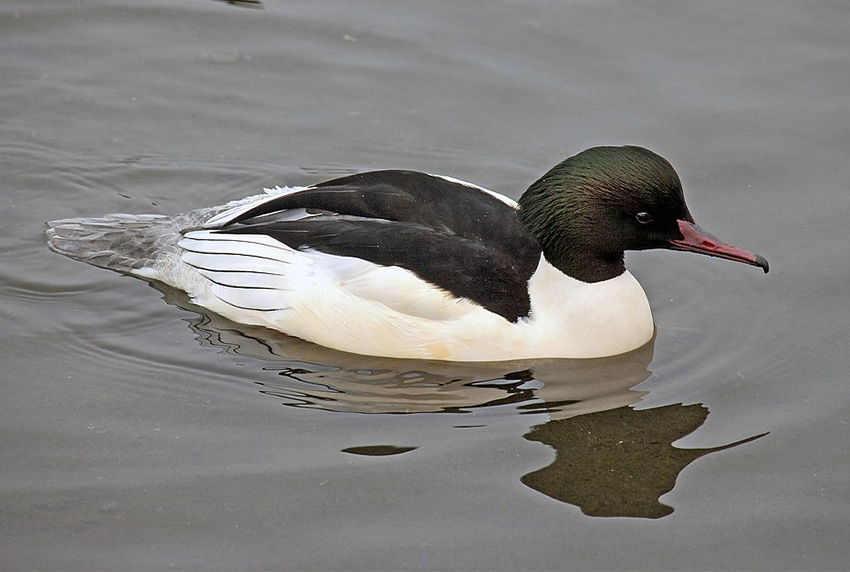 Goosander ducks can sometimes be seen on the reservoirs at winter.

Large mixed feeding flocks of finches, tits, and nuthatch may be seen moving through the wooded areas. Check the reservoirs for ducks and geese; besides the usual Canada geese and mallard, goosander and mandarin duck may be seen. Winter thrushes and brambling will still be around.

You never know what birds you can see when out walking in the Goyt Valley. At the time of writing (August 2019) there is a chough at Windgather Rocks. This red billed and red legged corvid is a coastal bird in the UK, and was probably blown into the Goyt Valley from its stronghold on Anglesey and the Llyn Peninsula on recent westerly storms. 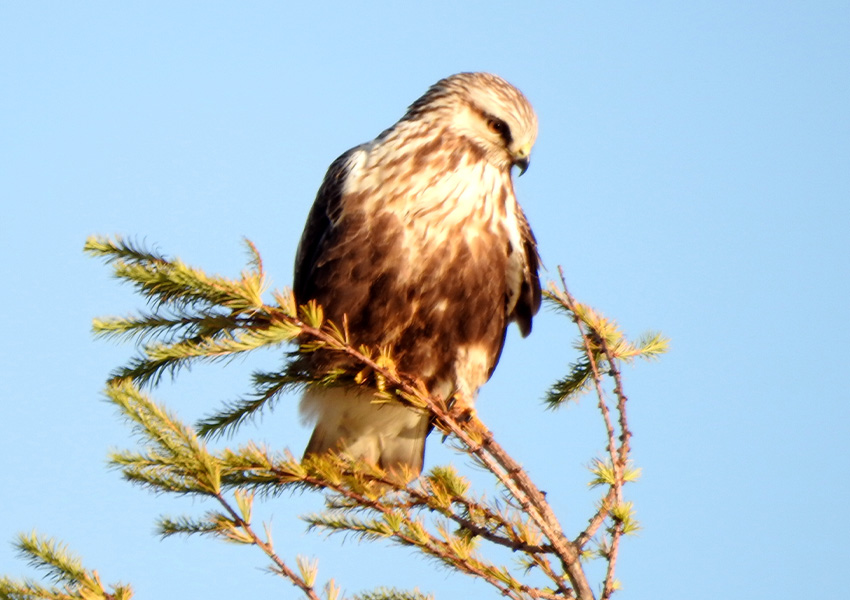 My thanks to Steve for sending this photo of an R-I Buzzard taken last November, perched above the small reservoir at the top of the Bunsal Incline (click to enlarge). Steve explained;

It was the first Derbyshire sighting since 2015. They’re found in Arctic and Subarctic regions of North America and Eurasia during the breeding season and migrate south for the winter. But to find one so far inland in the UK was a good record for the Goyt.