Above: Captain John Butler and his wife, Hannah, are buried beneath a stone cross – the central one of the three shown here – in the Grimshawe family’s hill-top cemetery, above the ruins of Errwood Hall. 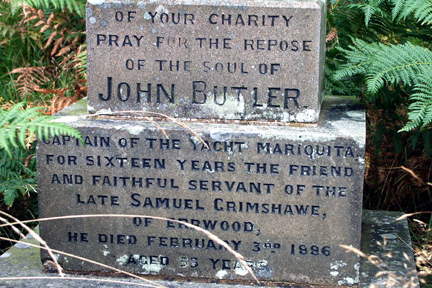 Above: The inscription is now becoming hidden beneath the litchen. This photo was taken some years ago when the words were far more legible (click to enlarge). 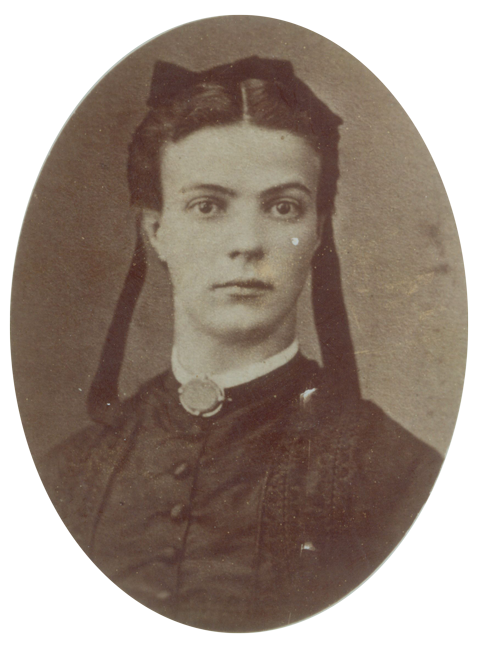 Above: Hannah Butler was just 39 when she died, just a year after her husband, leaving five children. She is also buried beneath the stone cross.

Captain John Butler has always fascinated me. He was the Master of the Grimshawe’s ocean-going yacht, The Mariquita, and is buried, together with his wife Hannah, in the hill-top cemetery above the ruins of Errwood Hall. The rhododendrons which bloom so magnificently around the ruins of the hall are said to have been transported from distant lands as ballast in the hold of the ship. The following article is taken from Gerald Hancock’s ‘Goyt Valley Romance‘.

A great fairy tale story, from humble beginnings to a life of distant ocean travel, a truly romantic marriage in a foreign land, and to be blessed with a family of seven healthy children, in what was to become a full but all too brief a life for both John Butler and his young wife Hannah.

John Butler, the son of a stone mason, was born on the 15th July 1830 at Dunmore East, which is near Waterford in southern Ireland. As a boy he must have watched all those tall masted sailing ships coming around the headland of Dunmore to the picturesque port of Waterford, perhaps dreaming of sailing on one of those fine ships.

From that headland of Dunmore East, where he would have spent many an hour gazing out to sea, his dream was to be realised when from a boy of only ten and a half years, he was out at sea on board ship, and destined for a seaman’s life.

After serving on his first ship ‘Emma’ which was berthed at Waterford, he was to spend over nine years with her as an ordinary seaman learning his craft. He progressed on a variety of vessels, sailing from a number of well known ports, Liverpool, Newquay, St. Johns, and his own port of Waterford.

It would no doubt be very hard work in those days of the fore and aft rigged vessels, but eventually he gained experience and sailed as boatswain and later mate. Then after spending more than 17 hard years at sea, he applied for his Master’s certificate.

He was examined at Liverpool, where he duly passed as Master, with special qualifications for “fore and aft”. (jib headed or jackyard topsails and schooners), on the 8th December 1862.

It is known from marine records that after gaining his Masters certificate, he sailed with the yacht ‘Cossack’, and then for a few years he was Captain of the yacht ‘Lerne’, sailing out of Liverpool during the year 1868 to Holland, Belgium etc., working the busy coasting trade.

She was built by Inmans of Lymington in 1854 and firstly berthed at Poole, before being altered and then berthed at Cowes. The yacht was schooner rigged, 90 feet long, 18 feet wide, 10 feet in depth, and weighing 105 tons.

A Mr. G.C.S. Durant owned the yacht in 1869 and she was sailing out of Galway, the West of Ireland Club. During the Grimshawe’s time, the yacht was berthed at Liscard on the Mersey estuary, near New Brighton and early in 1871 John Butler, master mariner, was engaged as her Captain.

It was the first voyage for the devout Catholic Grimshawes, and there was a small altar made on board the yacht. They were also accompanied by the Chaplain from the Hall, who at that time was Charles Bell.

That first voyage through the sunny Mediterranean to Italy was to be a memorable one indeed for in Naples, in the British Consulate, Captain John Butler was married to Hannah Edge, the cook on board the Mariquita.

The ceremony took place on the 3rd February 1871 and was witnessed by Bamptiste Monmouth and John Butler’s brother Richard. The Edge family were servants of the Grimshawes, and Hannah, along with her brother Thomas, came from Goyt’s Clough in the Goyt Valley. At the time of their romantic marriage, John Butler was 39 years old and his wife Hannah was 23 years.

The Butlers at first lived in Ireland where their first child Thomas was born in 1872, followed by Mary in 1875. Captain Butler and his wife Hannah moved to Liscard, where the Mariquita was berthed, and during this time from 1876 to 1881 there were three more children, Elizabeth, Anna Genevieve, and John, living at 29 St. Albans Road.

A friend of the Grimshawes

Captain Butler as well as servant of Samuel Grimshawe was also regarded as friend, for along with members of his family, John Butler was many times a visitor to Errwood Hall. He was presented with a silver plated tea and coffee service, inscribed, ‘with a token of esteem and affection’.

Other members of the Butler family were at Errwood from 1875 to l887, as either godmother or godfather, known from Catholic records St. Mary’s Chapel.

After 1881, John and Hannah Butler left Liscard and came to live, along with their children at Castedge Farm, which was at the rear of the Hall. John Butler had left his life at sea and had been given the position of Land Steward.

Over the years, Castedge Farm had traditionally been the home of a farm bailiff, head shepherd or other such occupation. Here the Butlers stayed where two children were born, Robert on the 31st March. Baptised 6th April 1884 and Cissie, born 15th November 1885. Both were baptised at the Chapel at Errwood Hall.

It must have been a great shock to his wife and family when Captain John Butler suddenly died at the age of 55 years on the 3rd February 1886. He died at Castedge Farm, attended by Dr. A.Shipton, the cause of death was given as apoplexy. His burial was in the Grimshawe’s private cemetery after a full Catholic service, held in the tiny chapel at the Hall.

Sadly, his wife Hannah died soon after on the 4th November 1887, also at the farm, at the age of 39. The cause of death was given as enteritis after herniotony. She lies buried with her husband in the private cemetery. On the stone cross which they share is the epitaph, ‘They loved each other in Life and in Death, they are not parted, may she rest in peace.’