Above: A look at old maps reveal that these sturdy gateposts once formed an entrance onto the track of the C&HPR.

Continuing the quest to identify old stone gateposts in the valley, I came across two fine examples yesterday evening, just as the sun was setting. Like so many others, they stand alone, with no stone walls to show any field boundary.

They’re a short distance from the top of the Bunsall Incline, on the right of Sandy Lane. Also known as Old Goyt’s Lane, this once led down to the drowned hamlet of Goyt’s Bridge from the Buxton to Whaley Bridge Long Hill Road.

Click the ‘Now’ button on the fade above to view a satellite image showing Old Goyt’s Lane all the way down to Errwood Reservoir. This curved lane is easily recognised from the other side of the reservoir as it snakes down the valley side. The ‘Then’ button shows a map of the same area in the early 1900s. (Errwood Reservoir was flooded in the mid ’60s.) 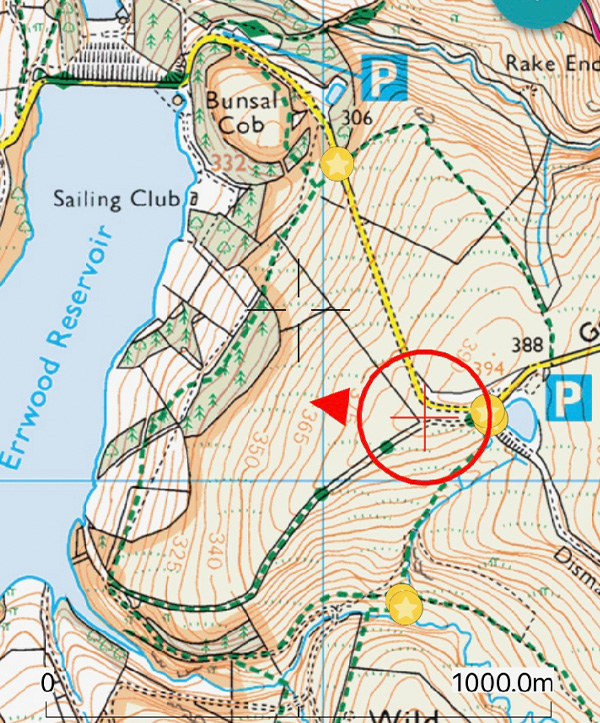 Above: A screengrab from my ViewRanger app pinpoints where the gateposts stand.

This close-up of the same fade shows that the gateposts lay beside the track of the Cromford & High Peak Railway, just before it dropped down along the Bunsall Incline, the steep slope which today forms the main route into the valley from the Long Hill Road.

This northern section of the railway – from Ladmanlow to Whaley Bridge – closed in 1892 when an easier route avoiding these steep slopes was opened.

Today the small pond sitting close to the gateposts is a popular starting point for walks along the disused track. But it was created to feed the steam locomotives, as well as the steam engines which dragged trains up and down the slope.