Above: This view of Errwood Hall from the other side of Shooters Clough provides a good idea of the layout. I’d guess it dates to the late 1920s.

I’ve circled where we now think the Catholic chapel may have been situated, rather than the top storey turret.

Catherine Parker-Heath is Cultural Heritage Officer for the South West Peak, which includes the Goyt Valley, and is responsible for creating the new augmented reality app (view previous post). Designed to bring the ruins of Errwood Hall to life, it’s still very much in the early stages. One of the first steps is to try and identify the room layout.

Catherine was hoping to find detailed plans of the hall before it was demolished. But United Utilities – the owners of the land – have been unable to discover anything in their records. And neither Stockport Records Office, nor Buxton Museum, have anything in their collections. So working things out is going to mean a lot of informed guesswork. 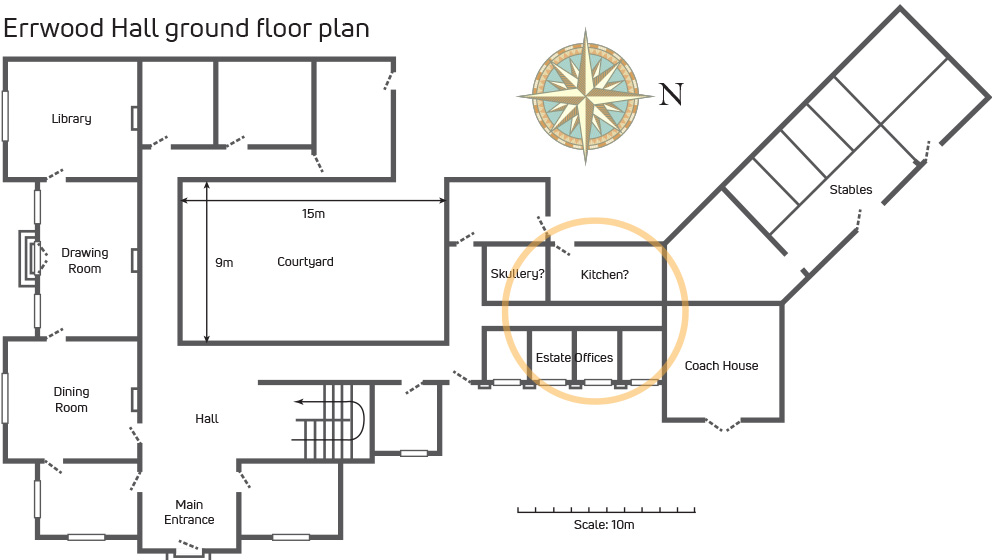 Above: Plans drawn from measuring the ruins in 2004 (click to enlarge). I think the room captions were added later, and apart from the stables and coach house, they were educated guesses. The orange circle shows where we now think the chapel was situated, on the top floor (see below).

One major feature Catherine still isn’t sure about is the central courtyard, which seems a waste of space and wasn’t mentioned in any contemporary sources. It would also have been unusual in a Victorian country houses of this size. Although it may simply have been due to the Italian heritage of the architect, Alexander Roos. Catherine says:

“The only firm evidence we have describing the interior of the house is a report of a visit in 1883 (click to view). And the 1930 auction catalogue detailing the contents of each room (click to view).

“It’s likely that the rooms described in the catalogue would have been written in the order that people viewed them – going from one to the next in rotation. Old photos show the number of windows in many of the rooms. So the number of curtains listed may also be relevant.”

This is the order of the downstairs rooms listed in the catalogue:

Catherine is hoping that others may be able to help with this research, or simply offer an opinion. So if you’re interested, please leave a comment below, or get in touch using the contact page. 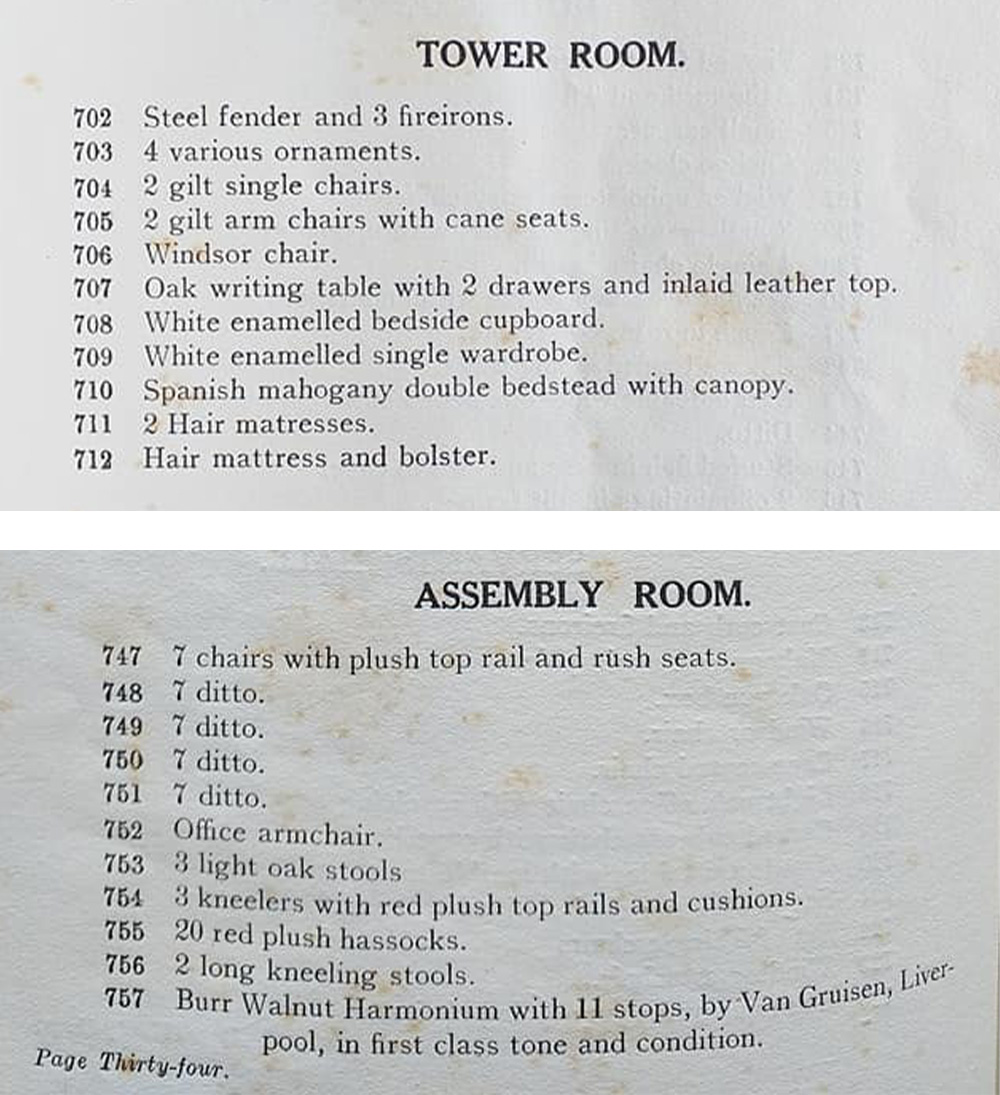 Above: These entries in the auction catalogue (click to enlarge) show that the Assembly room would most likely to have incorporated the Catholic chapel – rather than the Tower room which probably served as a bedroom. 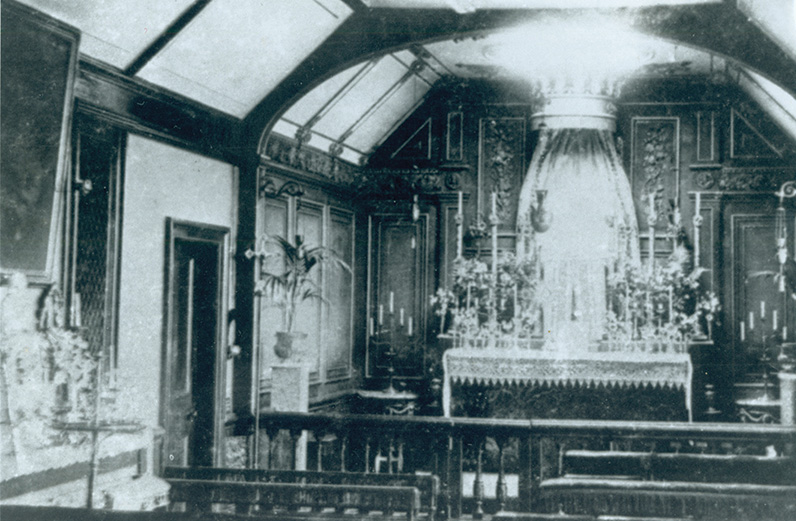 One result of Catherine’s investigations is that she thinks the chapel at the hall isn’t where everyone assumed it was – at the top of the turret. The visitor in 1883 writes:

By the kindness of the benevolent owner we are able to give a few items respecting some of the most noteworthy rooms, and their appointments. Attached to the hall, and in fact, forming part of the building, is a very handsome room, fitted up as a chapel, for the use of the family and servants, and the few inhabitants of the neighbouring farmsteads and cottages to celebrate divine service.

Catherine believes that the turret room would have been part of the private residential area. It’s described in the catalogue as the ‘Tower room containing a double bed’ – so it’s unlikely that local farmers and their families would have been allowed into it.

The photo showing the interior of the chapel (above) appears in Gerald Hancock’s ‘Goyt Valley Romance‘ captioned ‘The private Catholic Chapel inside Errwood Hall, located in the upper storey at the northern end’. So Catherine thinks it’s most likely to be what the catalogue describes as the ‘Assembly room’.

The catalogue entry for this room includes five rows of seven chairs with plush top rail and rush seats, as well three kneelers and a harmonium organ. Which sounds very much like a chapel. And since Gerald says it was at the northern end of the house, it looks likely that it was the room circled at the top of the page, and on the outline plan.

It’s a great pity Catherine hasn’t managed to locate a detailed plan of the hall. Particularly to confirm whether the central area was an open courtyard. It would make creating the app a lot easier. 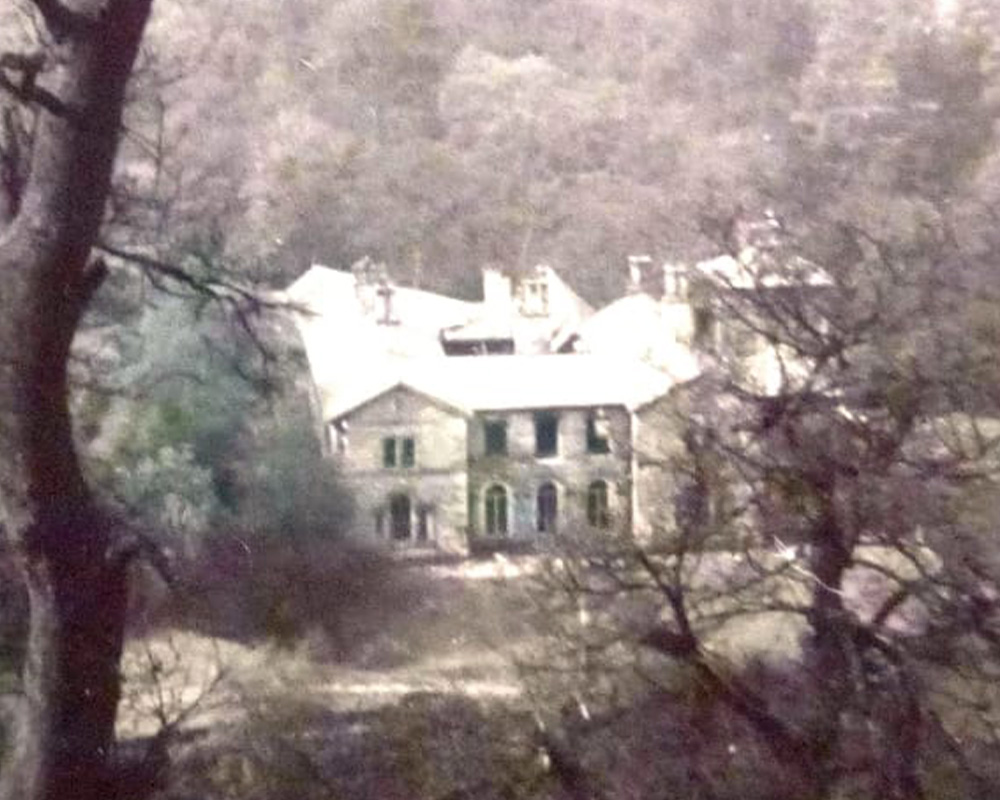 Page update, 23rd March 2022: Dave has just forwarded me this photo of Errwood Hall which seems to confirm that there is an open courtyard in the centre of the building (click to enlarge).