These four very similar photos were among a collection that Gerald Hancock, author of ‘Goyt Valley Romance‘, allowed me to scan when I started this website, back in 2012. They show a shooting party and range in date from 1881 to 1887.

They were all taken in Goyt’s Bridge – three in front of Errwood Cottage, and the other on the nearby bridge over the aptly named ‘Shooters Clough’. 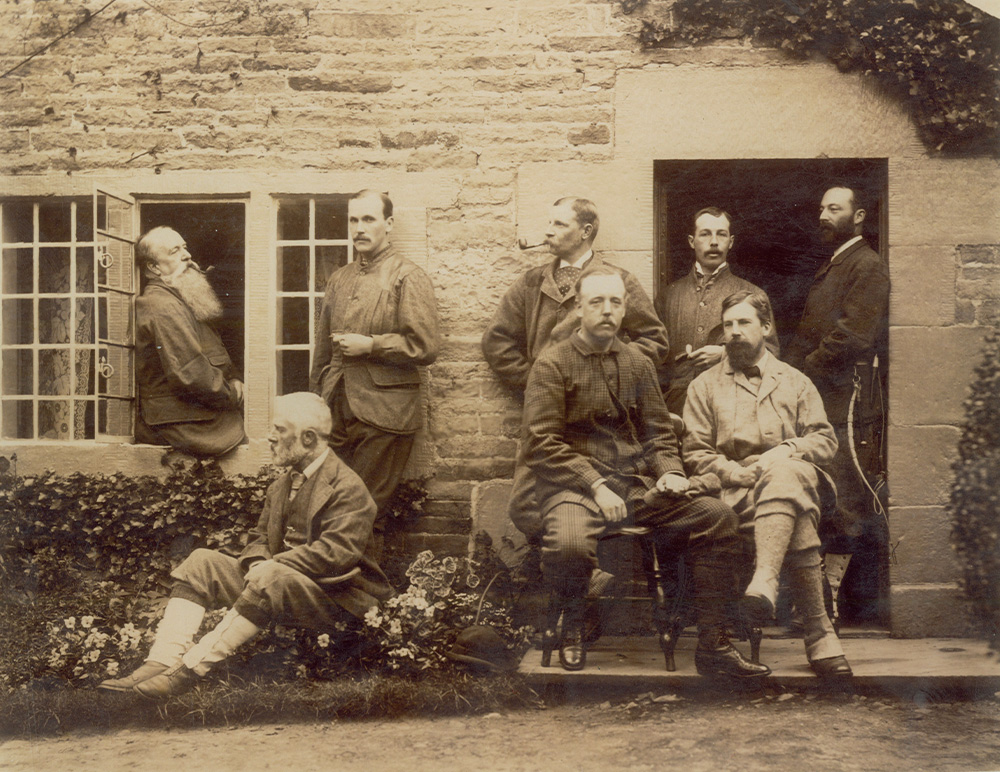 Dated 1881: There are seven in the photo but only five names (from left to right): T Brooks, F Gaskell, F Paget, E Warner, EJ Coope. 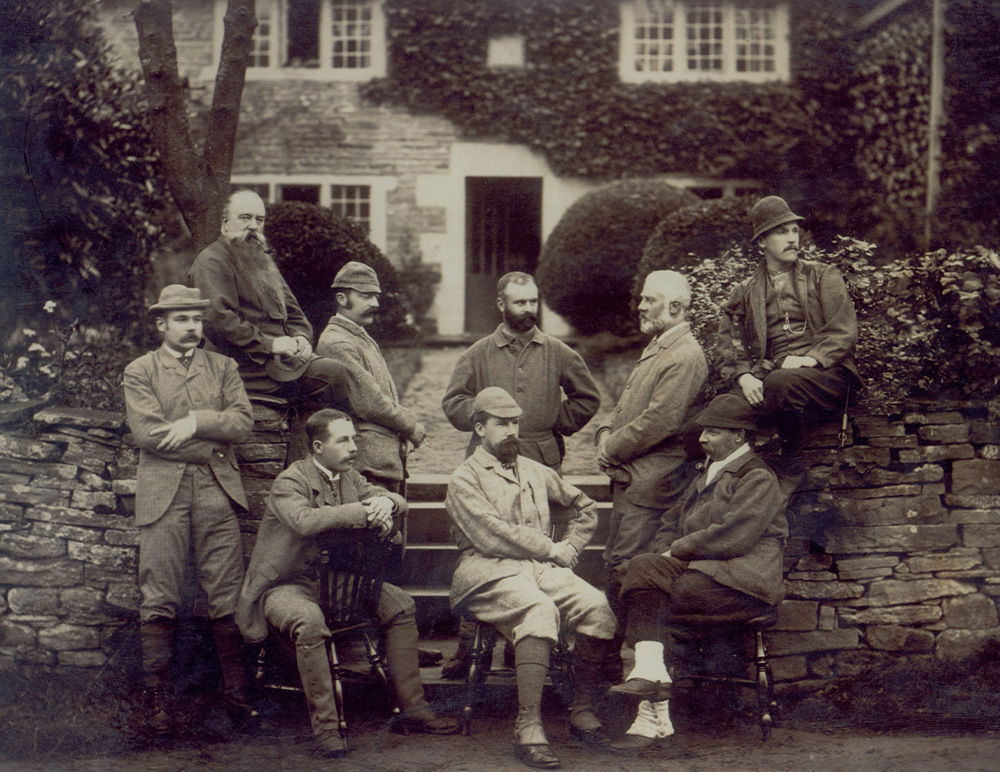 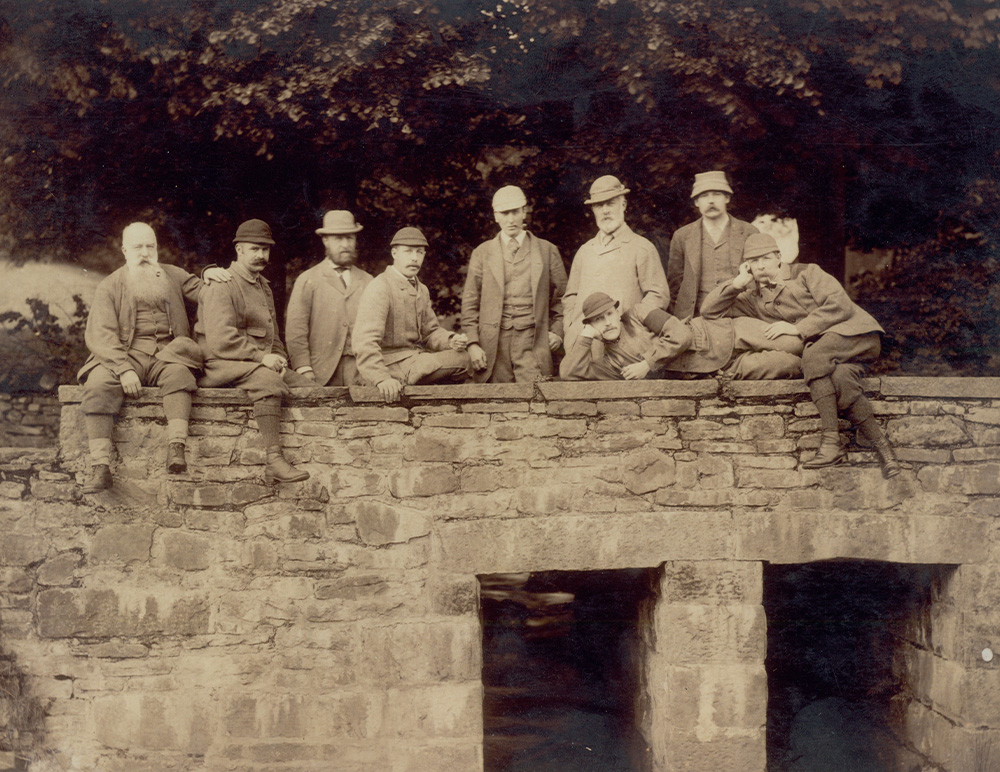 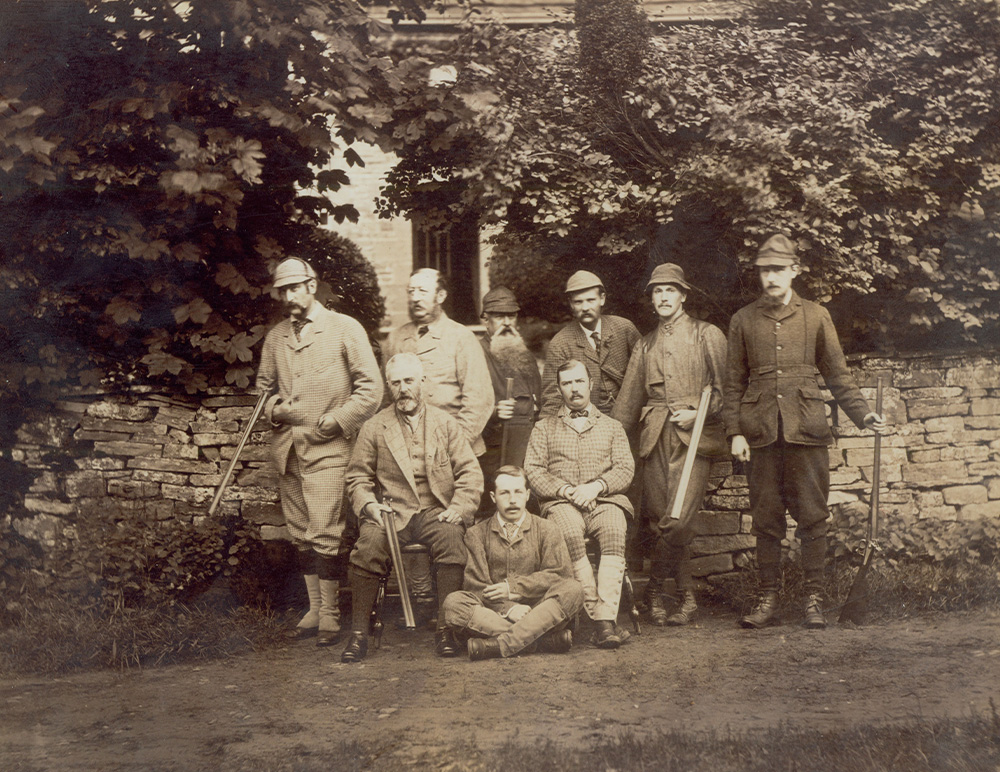 Dated 1887 (from left to right): No caption but F Gaskell is second from right.

One member of the party seems to stand out from the others. He is Fredrick Upton Gaskell and is circled in the top photo.

He is the son of Margaret Grimshawe, the sister of Samuel Grimshawe who had inherited Errwood Hall on the death of their father in 1851. Which makes Fredrick Samuel’s nephew, and cousin to Samuel’s daughters, Mary and Genevieve. It was Fredrick’s mother, Margaret, who erected the memorial to her parents in Taxal Church (click for details).

There are two fathers and sons: T (with the long beard) and J Brooks, and W and T Paget. Apart from Fredrick, the only person I’ve been able to trace is Lord Belper who is seated in the centre of the 1882 photo. A Wikipedia page says: 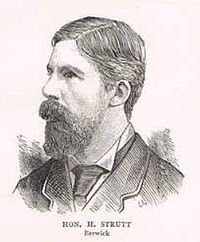 Henry Strutt, 2nd Baron Belper, PC, JP, DL (20 May 1840 – 26 July 1914), styled The Honourable Henry Strutt between 1856 and 1880, was a British businessman, courtier and politician. Initially a Liberal, he left the party over Irish Home Rule and later held office as Captain of the Honourable Corps of Gentlemen-at-Arms from 1895 to 1905 in the Unionist administrations headed by Lord Salisbury and Arthur Balfour.

Henry Strutt was born at St Helen’s House, Derby, Derbyshire, the son of Edward Strutt, 1st Baron Belper, and his wife, Amelia Harriet Otter. He was educated at Harrow and Trinity College, Cambridge, from which he held the degrees of LLB and MA. In 1862 he played cricket for Cambridge University and from 1863 to 1865 for Marylebone Cricket Club (MCC) against the universities. He became president of the family cotton business W. G. & J. Strutt.