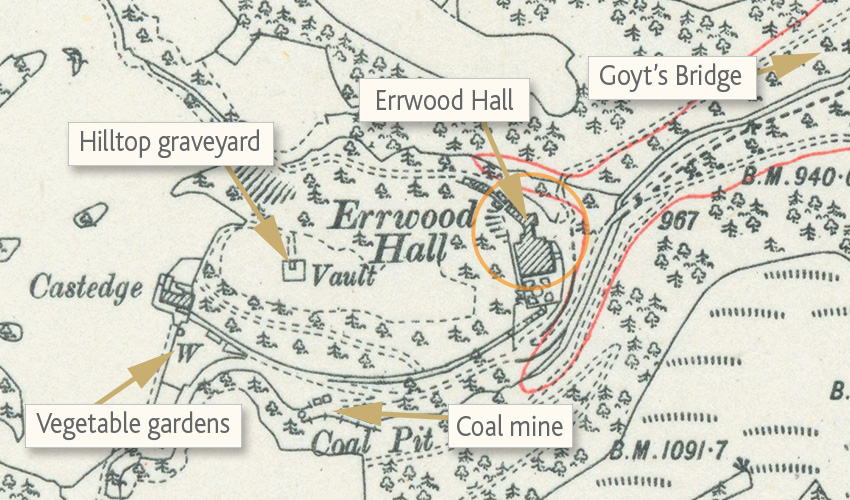 Above: This 1890 map (click to enlarge) shows the shape of the Hall – with the ornamental gardens to the south, and the stables and outbuildings to the north. A path through the gardens leads up to the family’s hill-top graveyard.

The driveway to Goyt’s Bridge ran alongside Shooter’s Clough – a picturesque stream. Today they both run beneath the modern bridge beside Errwood Hall car park. 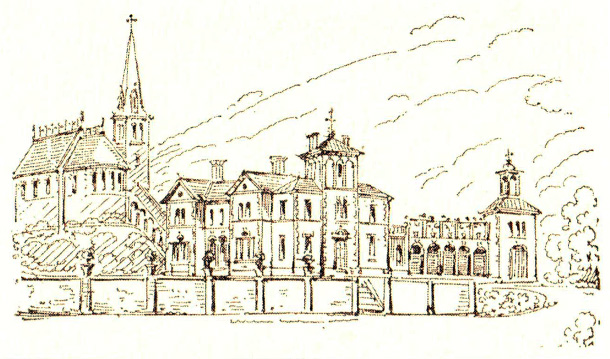 Above: Taken from Gerald’s ‘Goyt valley Romance’ this sketch – presumably an initial one by the architect Roos – shows a magnificent church with spire on the hill behind the Hall (click to enlarge).

What a pity they didn’t ahead with it. I think even Stockport Corporation may have baulked at demolishing such a fine building!

Above: Errwood Hall staff (click to enlarge) pictured on the drive in the early 1900s. Mr Wiles, the butler, is seated far left. And his wife, the hall housekeeper, is in the centre foreground. I’ll update with more names if I discover any. 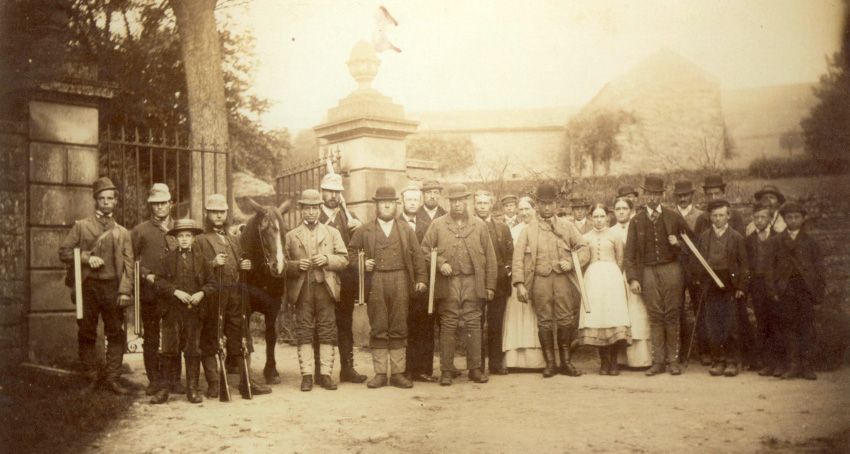 Above: This photo – which probably dates to the 1890s – is captioned ‘Errwood Servants & Keepers, etc’ and was taken in front of the gates leading from Gatehouse Cottage to the Hall. (Click to enlarge.)
Above: This photo, from the opposite side of the valley, looks as though it may have been taken in the 1930s, shortly before the hall was demolished. The ornamental gardens are to the left, and the stables around the bend to the right. Anyone visiting the ruins today will recognise the arches overlooking the garden (below).

There’s lots of information about Errwood Hall and the Grimshawe family who lived here on this website, as well as old photos, plus memories of those who both worked and visited this grand country house. Click any of these links to view the various sections; The Grimshawes | Errwood Hall | Various photos. 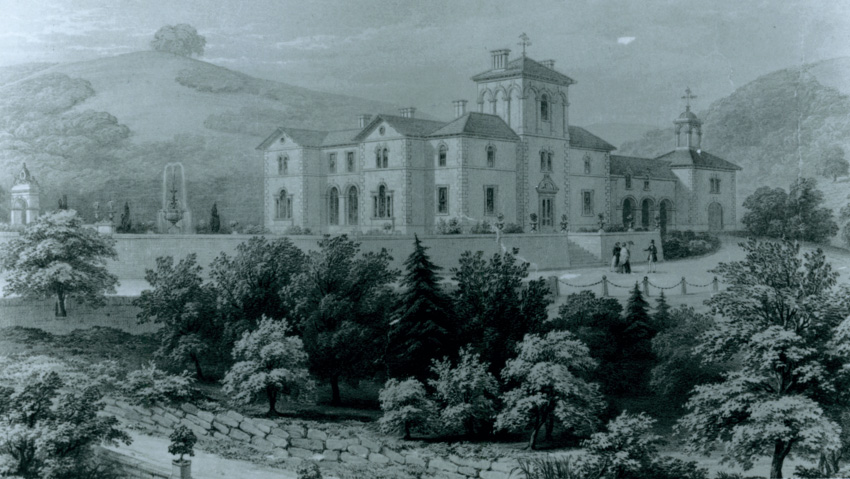 Above: This wonderful illustration (click to enlarge) is a lithograph print made by the young architect of the hall – Alexandre Roos. So it probably dates to the late 1830s or early 1840s. The room at the top of the tower was used as the family’s Catholic chapel. It’s said that the light through this window could be seen for miles across the valley.

Samuel Grimshawe purchased the 2010 acre Errwood Estate in 1832 for £9250. Work on the hall started sometime around 1840, overseen by Samuel’s son, also called Samuel. The younger Samuel inherited the estate on the death of his father in 1851. And when he died in 1883, the estate passed first to his wife, Jessie, and then on her death in 1893, to their two daughters, Mary and Genevieve.

Genevieve died in 1929, followed a year later by Mary. And it was at this point that the entire estate was compulsory purchased by Stockport Corporation to build the twin reservoirs that today dominate the valley. In 1932 work started on Fernilee Reservoir to the north, and it was shortly after that the decision was taken to demolish the hall, as well as some 14 farmhouses and cottages on the land.

With help from Mike and Gail, I’m still compiling census records of those who lived in the hall; the Grimshawes and their servants.