Above: The green dashes show the road from Goyt’s Bridge as it passes Masters Farm (above left and circled on the map) and winds down the valley towards the nearby Gunpowder Mill, and on to Fernilee and then Whaley Bridge.

An 1836 newspaper report described an accident in which George Heaps, a worker at the gunpowder factory with a wife and four children, was blown 600 yards into the farm. It adds, somewhat unnecessarily; “He was, of course, quite dead when found”.

A 1907 newspaper cutting described the road through the Goyt Valley as “one of the loveliest of Derbyshire drives”. It was reporting the closure of the Errwood Estate following what Mary Grimshawe described as “the disgraceful conduct of a char-a-banc party”. (See bottom of this linked page for details.)

There were four main routes into the valley which crossed at Goyt’s Bridge. From Derbyshire Bridge in the south, Rainow from the west, Buxton from the east (today’s main route into the valley), and Fernilee from the north.

Above: Click this late 19th century map to expand. I’ve marked the south to north route in green. Although I haven’t taken it as far south as Derbyshire Bridge as I don’t have a high-resolution scan of this map. The areas shaded in pale blue show the twin reservoirs today.

The most scenic of these roads would have been the narrow lane running between Derbyshire Bridge (also known as Goyt’s Moss) at the junction with the old road between Macclesfield and Buxton, through Goyt’s Bridge and past Fernilee Gunpowder Mill, to join the Long Hill Road (today’s A5004) near Whaley Bridge.

For much of the route, the road followed the River Goyt – which divided Cheshire on the west with Derbyshire to the east – through a gloriously picturesque landscape. 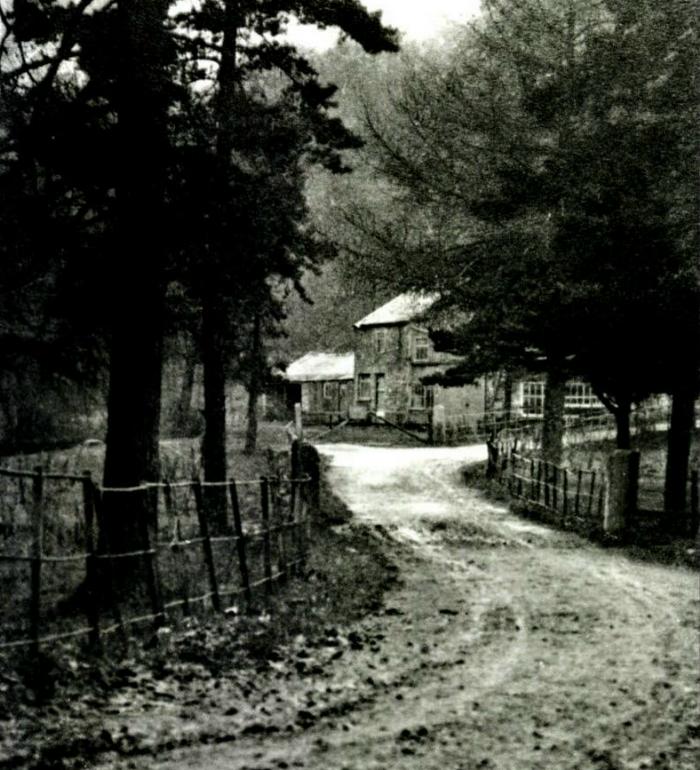 Above: The entrance to the Gunpowder Mill (click to enlarge).
I wasn’t sure where the northern section of the route ended. Looking at old maps, there were alternative routes via Taxal which would have bypassed the Gunpowder Mill. And I’d have thought this would have made more sense – given the obvious dangers of driving so close to an explosives factory.

But an 1883 report of a visit to Errwood Hall describes the route from Fernilee, and seems to confirm that it did go past the mill;

The Hall, nestling in its snug and almost inaccessible position, is approached from Whaley Bridge and Buxton by an excellent carriage road, which connects itself with the highway in Fernilee. The route is very pretty and varied scenes meet the eye.

From the Lodge, passing down an open field, it winds round a curve, and then by a shady copse past the Gunpowder Mills, which lie in the valley, and thence alternately into open field and wood, until it emerges near the Lodge Cottages, where it begins to ascend, by a gentle ascent, amid the fine grove of rhododendrons, holly, and other evergreen bushes (the former of which in the flowering season are very beautiful), by the pale green ferns and the grassy and mossy slopes, and the winding rivulets, and the most delightful, natural, and artificial scenery, until, on reaching a bend in the path, the noble pile bursts in full view like some fairy palace just dropped into the bosom of the evergreen surrounding. 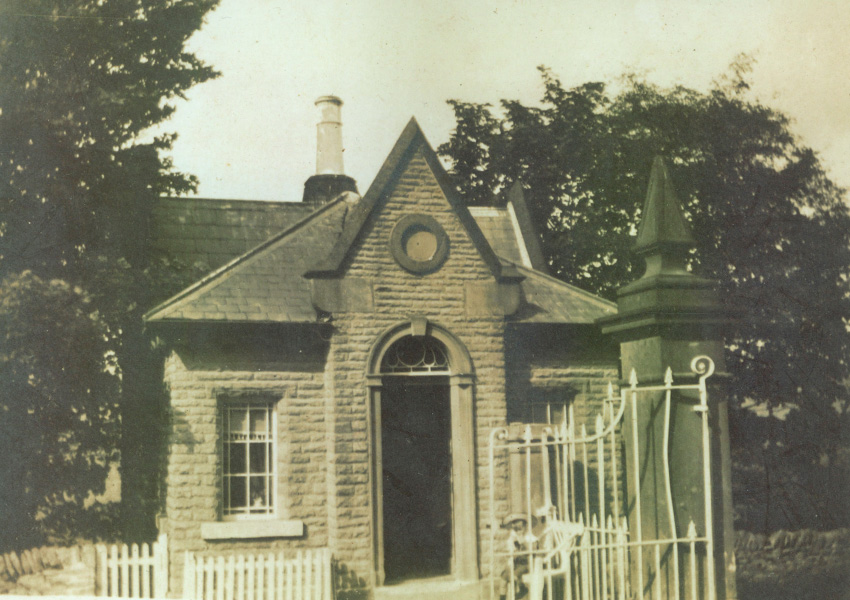 There are two lodges mentioned in the 1883 article. I think the first is the one pictured left (click to enlarge) and identified in this post, at the Fernilee end of the road.

And I’m sure Lodge Cottages refers to Errwood Cottage – also known as ‘The Gatehouse & Gardener’s Cottage‘ – which lay beside the gates to the lane leading up to Errwood Hall.