Is this Old Goyt’s Lane? 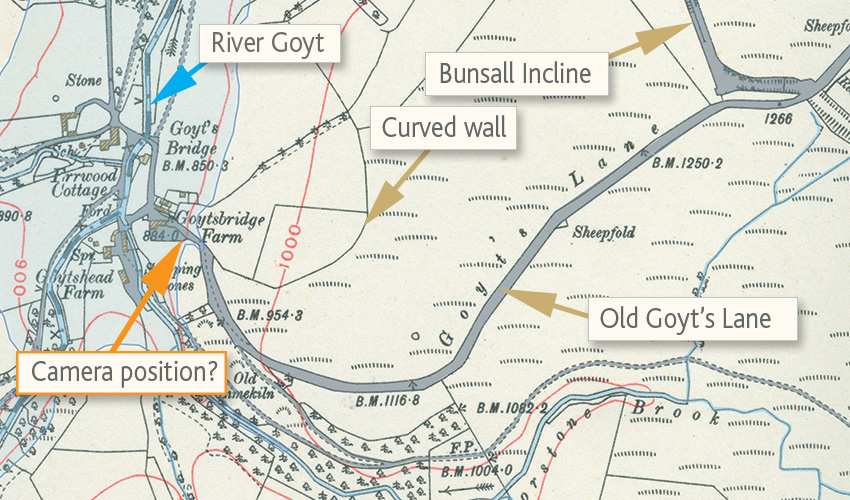 Above: This 1890 OS map (click to enlarge) shows both the Old Goyt’s Lane road into Goyt’s Bridge, and the Bunsall Incline.

I’ve marked where I thought the photo must have been taken. And the curved wall which is still very evident today on the hillside.

At this time the incline was a disused railway line; part of the Cromford & High Peak Railway. It wasn’t tarmacked until 1967, following the construction of Errwood reservoir.

Today the incline is the main route into the Goyt Valley. And the lower section of Old Goyt’s Lane provides an attractive path for walkers.

Mark has sent me another of his father’s photos (above) which he thinks may have been taken in the Goyt Valley sometime around 1930 and asks whether I can identify the exact spot. (Click to view previous post about Mark’s father’s photos.)

My first thought was that it must have been at the end of Goyt’s Lane (also known as Sandy Lane and Old Goyt’s Lane). The curved wall in the background and the slope and width of the track looked correct.

Goyt’s Lane has a rich history stretching back to Roman times. And for many centuries it was part of a major packhorse trail connecting Buxton with the Cheshire salt brines (click here for more info).

Today the upper part of Goyt’s Lane is the most popular route into the Goyt Valley, from the Buxton to Whaley Bridge ‘Long Hill’ road.

The lower section was diverted in the mid ’60s, following the construction of Errwood Reservoir, down the Bunsall Incline – the steep and straight section which once formed part of the Cromford & High Peak Railway line.

Above: A view down the bottom section of Old Goyt’s Lane. This track once reached the hamlet of Goyt’s Bridge. Today it vanishes into the waters of Errwood Reservoir.

This bottom section of Goyt’s Lane now makes an attractive walk (see walk 10). But it is quite steep and narrow in parts. Horses and motorcycles would have been fine. But I’ve often wondered how cars would have managed – especially with fairly basic engines and  suspension.

I’d hoped this photo would provide the proof that it was possible, but perhaps only for cars built for the task. As Mark says; “My father did take cars down all sorts of lanes and tracks quite as a normal thing, especially the Frazer Nash which was a type successful in trials.”

For less ruggedly built cars, as well as horse and carts, I think the main route through Goyt’s Bridge from the north would have been from Fernilee, past the old gunpowder mills, and then on to either Derbyshire Bridge and the old road to Macclesfield, or up the old Roman road to Rainow.

Jumping to the wrong conclusions

So all in all I was feeling pleased with myself for identifying the spot. Until I noticed the building down in the dip behind Mark’s father. A closer look at the old OS map (above left) showed there was no lower ground to the left of this part of the road.

Which just goes to show that one shouldn’t jump to conclusions! Please get in touch (or leave a comment below) if you think you know where the photo was taken.