C&HPR photo: where is it?

Above: Photos of the northern section of the C&HPR which ran through the Goyt Valley are very rare. It was closed in 1892 when an easier route was opened.

I’ve inset a close-up of the feature at top right. We initially thought it might be the entrance to Burbage tunnel.

But it now looks like more likely to be the bridge which crosses the railway on the old Macclesfield Road near Burbage. 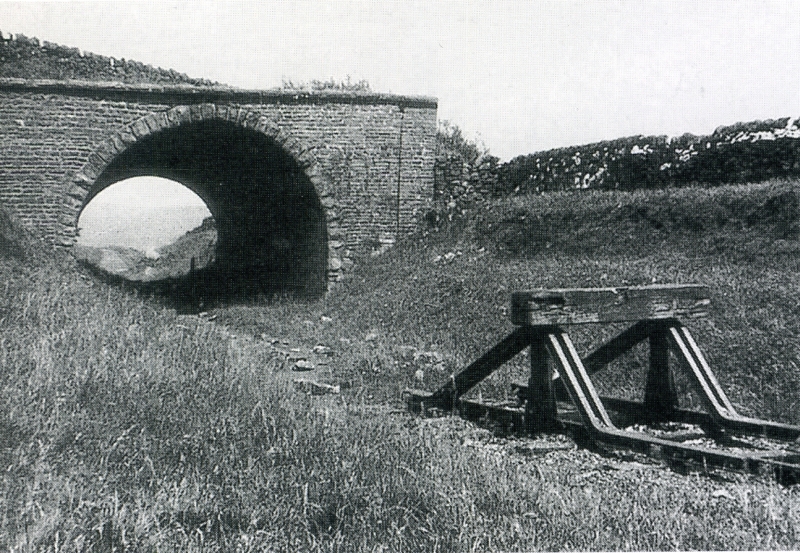 Above: This photo was taken in 1941 and shows the same bridge (click to enlarge). I found it on this website.

The caption on the website explains: “The stop blocks represent the end of the track north of Ladmanlow since the route to Shallcross closed in 1892.

“Ladmanlow Goods Yard was closed in 1952. Burbage tunnel is up ahead but not seen due to a lefthand curve.”

I always enjoy trying to trace old photos of the valley before the twin reservoirs completely changed the landscape. Mike recently sent me the above photo which he found on the ‘Buxton of Yesteryear’ Facebook page.

Mike initially thought it looked like a section of the Cromford & High Peak Railway line as it headed towards Burbage tunnel after coming up the Bunsal Incline. The built up embankment does look very similar to those on this section of the disused track. But we wondered whether it might be a bridge rather than the tunnel entrance.

One of Mike’s friends said that he was “99% certain it’s Harpur Hill, which has a track layout and embankment just like this”.*

I’ve just received this message from Colin who is very knowledgeable about the C&HPR:  “At first I thought it was the northern portal of Burbage tunnel with the realigned curve beforehand but, on reflection, I’m sure it is beyond Ladmanlow station and shows the bend from the bottom of the Macclesfield road.

The bridge in the background is the one over the Old Macclesfield Road where the line was cut off when the northern section was abandoned.” 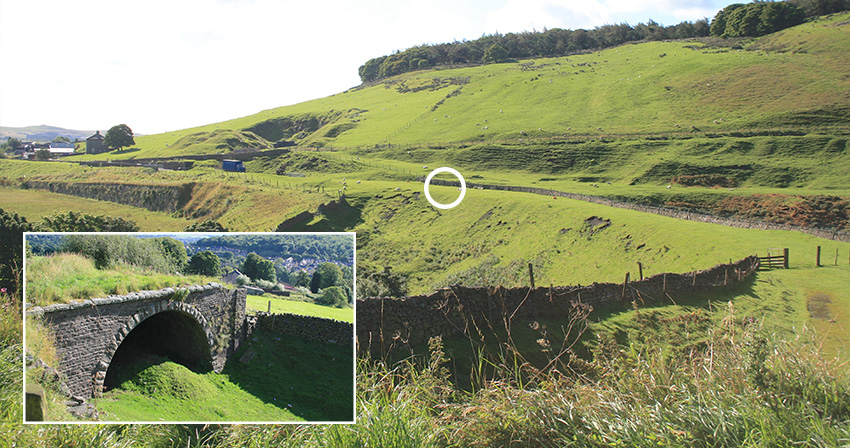 The photo above (click to enlarge) is taken from walk 12, which follows the old C&HP Railway from Burbage on the western edge of Buxton, via the Goyt Valley all the way to its end point at the canal basin in Whaley Bridge.

I think it shows that Colin is correct. The embankment can clearly be seen in the centre. The  bridge (inset) is just below where I was standing to take the photo.

I’ve circled the point I think the photographer must have been standing. He would have taken it looking towards where I took my photo, with the wider track surface on the right showing where the line split into two.

My photo looks down the line as it heads south towards Ladmonlow and eventually Cromford. The bridge is now filled in, but the track bed as it exits the tunnel makes a wonderful walk as it leads on towards Burbage tunnel (which is now on private land and sadly inaccessible).

There has been talk about opening the entire C&HPR track as a cycle trail, much like the popular Monsal Trail between Buxton and Bakewell. It would be fantastic if this could be achieved. But it would be a longer and more difficult project, with sections on private land. So it’s doubtful it would ever happen without significant public and political support.

*Mike’s friend was also correct. Although this section of the track is near Burbage, it was known as Harpur Hill.

Click the Then and Now buttons to fade between an 1888 map of the area and today’s satellite view. I’ve circled where I think the photographer was standing.

The photograph was taken looking north along the line of the C&HP railway line. You can see where the line ended – the tracks running towards the Goyt Valley had been removed by the time the map was drawn.

The houses at top right on the satellite view are in Burbage, on the southwest outskirts of Buxton. The road at the bottom of the image is the A54 to Macclesfield. The footpath crossing the line from top right is the old Buxton to Macclesfield road.