Above: Castedge  Mine Manager, Jack Hewitt, pictured in 1922 sitting on one of the coal tubs with his daughter Phyllis. Jack’s wife, Mary stands beside him, with the small mine entrance behind. 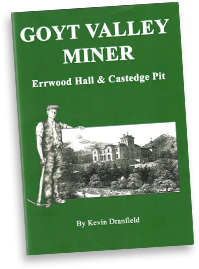 Information on Castedge Coal Mine is taken from Kevin Dranfield’s book, ‘Goyt Valley Miner’. The book costs £5 and includes some great photos illustrating the history of the mine. See below for information on how to obtain a copy. 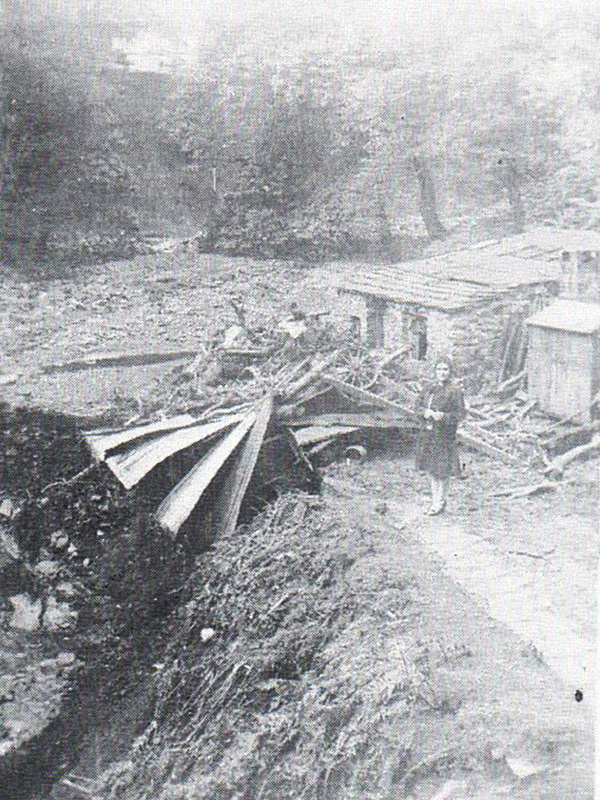 Above & below: These two photos show the devastation caused by the flash flood. (Click either image to enlarge.) 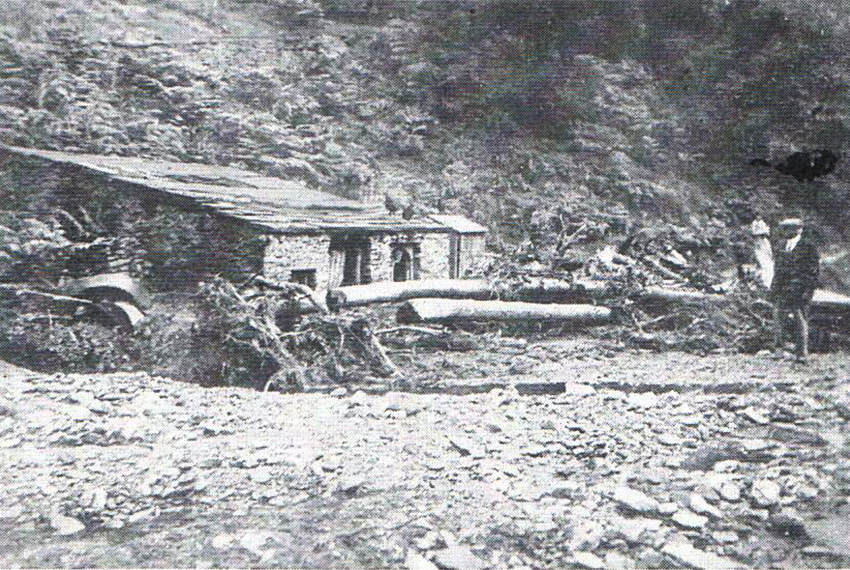 Below: Old OS maps show a ‘Coal Pit’ between Errwood Hall and Castedge Farmhouse (click to expand). But it’s virtually impossible to find any evidence of the workings today, even if you know where to look. All that remains are a few scattered brick foundations. The entrance to the mine has long since been blocked and is now covered by thick undergrowth. 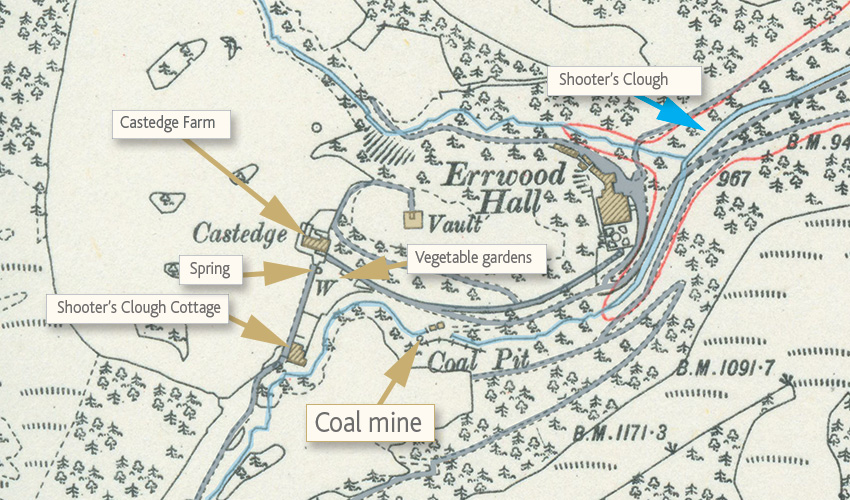 Coal had been mined in the upper Goyt Valley since the 17th century – by following narrow seams horizontally into the hillside, rather than by digging down. There were pits around the Cat & Fiddle, as well as at Derbyshire Bridge. The one at Castedge provided particularly high-quality coal, and was much in demand by local blacksmiths.

But by the 1870s most of the easily obtainable coal had been mined. And by the early 1900s most of the mines had closed. The only local mine that survived was Castedge. Mainly because of the demand from Errwood Hall, as well as farms on the Errwood Estate.

Because it had a longer life than the other mines, some of the workings were quite extensive, going as far as 700 yards into the hillside. The mined coal was dragged from the coalface on sledges, using a chain fastened to a leather belt around the miner’s waist. There wasn’t room to stand, so the miner had to drag the sledges on hands and knees – which must have been back-breaking work.

The coal was brought out of the mine in small tubs on a 20 inch gauge track which ran alongside the stream to a small concrete platform. From here the coal was loaded into lorries or carts and taken up the small slope to the track leading down the valley to Goyt’s Bridge.

Jack Hewitt was appointed Manager of Castedge Mine shortly after the end of World War I in 1919. His father had been a miner, and Jack had worked in number of other local mines, gaining both experience and qualifications.

Jack, his wife Mary, and their three children (soon to be four) moved into the Mine Manager’s house, Shooter’s Clough Cottage, which is close by the mine entrance. Today, all that remains is a pile of stones (it was demolished in 1934, along with Errwood Hall and 13 farms on the Errwood Estate). But it looks an idyllic spot, sheltered in the valley beside a small, picturesque waterfall.

Above: Shooter’s Clough Cottage can be seen in the background in this photograph, probably taken in the early 1930s.

All Jack’s children attended the local school. The eldest son, Joe, was either 12 or 13 when he left to join his father down the pit. Jack would be at the coal face, and Joe would load the coal and drag the sledge to the loading platform.

Sometime after 1925 Jack and his family moved to Goyt’s Bridge Cafe. He had been struggling to make ends meet from his earnings at the mine, and hoped the additional income from the cafe would help.

The last of the Grimshawe family, Mary, died on February 23rd 1930. Stockport Corporation had purchased the Errwood Estate to construct the twin reservoirs, and life in the valley was about to completely change. The mine was very much on borrowed time, but a flash flood on 30th August 1930 marked the beginning of the end.

The Buxton Advertiser reported the event;

…the floods poured from the hillside into the Goyt valley and the River Goyt burst its banks in a very short space of time. Goyt’s Bridge was almost underwater. In the valley near the houses, hen pens were swept away and back gardens completely flooded. It is even rumoured that cattle and sheep were swept along. At Errwood Hall the Caretaker had a narrow escape from being caught and had to take refuge in the upper storey of the house. The lovely grounds and gardens of Errwood Hall were damaged…

Above: Rain water still cascades down Shooter’s Clough into the River Goyt beside Errwood Cottage, some days after the flood.

The effect on the pit was even more devastating with the area around the mine entrance completely wrecked by the force and volume of water that had surged down Shooter’s Clough. Uprooted tress were tossed against buildings and equipment swept away down to the River Goyt.

The access track down from the road collapsed into the stream, making it impassable. A lifting machine was installed to take coal up from the mine to the road. But after three years of struggle, producing ever-decreasing amounts of coal, the mine formally closed in September 1933.

Click here to listen to Jack Hewitt’s son, Joe, talking about coal mining in the valley during a 1977 recording at BBC Radio Manchester.

Many thanks to David Easton of Furness History Society for sending me this 1933 plan of the Castedge Mine workings. I’ve highlighted the tunnels in brown and duplicated them onto an early 1990s OS map of the area (below). Click either image to enlarge. There were older workings to the west. ‘Old Shaft’ at top left on the OS map shows a ventilation shaft which is today a small pond beside the path that winds up the slope.