A most romantic location

Above: The entry for Errwood Hall is headed by this fine photo, probably taken in the 1920s.

This description of Errwood Hall is taken from a popular coffee-table book, The Derbyshire Country House, by Maxwell Craven and Michael Stanley. There are a few facts that I’d question, and others that are clearly incorrect (*see bottom of page). But the book still provides some interesting information…

Errwood Hall was probably in the most romantic location in Derbyshire, although for most of its existence, the house was located in Cheshire. Samuel Grimshawe, a Catholic Lancashire industrialist acquired the site, on the east slope of the then unspoilt Goyt Valley, and carved out a house platform.

His seat, upon which he proposed to lavish much expenditure, was designed by Alexander Beresford Hope, Hon PRIBA (1820-87) who inherited Beresford Hall, Staffordshire, and some land in Derbyshire from his kinsman Field Marshall Viscount Beresford.

It was one of this gifted amateur’s earliest buildings, being built from c.1841 until 1851 when Samuel Grimshawe died. Whereas Hope, politician, ecclesiologist and amateur architect (like his father, Thomas), is chiefly remembered for building in gothic, Errwood was Italianate with quirky Norman details. 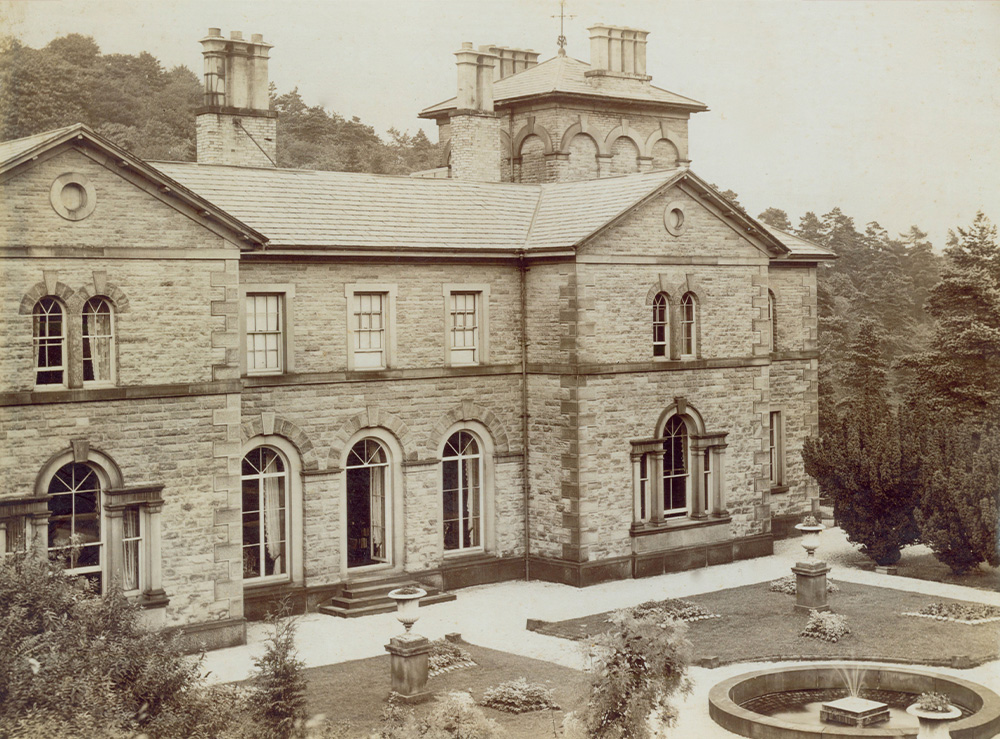 Above: A view of Errwood Hall in its prime, looking over the south-facing ornamental garden with its central fountain.

The entrance front faced east across the valley, with the garden front facing south. The latter, of two storeys, consisted of a three-bay centre, the lower story consisting of a glassed-in loggia with round-headed terrace-depth windows, the centre effectively a door, with projecting pedimented bays either side with coupled sashes on the first floor over Venetian windows below.

Built of rock faced and hammer dressed ashlar and coarse rubble of millstone grit sandstone (probably Rough Rock), the façade was embellished with a first-floor sill band and quoins.

The entrance front was of three bays with segmental headed upper storey windows, the central bay rising through the eaves of the hipped roof and projecting as an Italianate tower with a blank arcade at the top punctuated by a a single conforming window.

Where this feature departs from the mundane is that a chimney stack penetrates the low pyrimidal roof on either side each sprouting four chimneys. The apex of the roof was crowned by an elaborate wrought-iron weather vane.

The entrance itself, beneath a paired window, was crowned with a stone tympanum bearing the carved armorial crest of the Grimshawes.

Beyond and to the right was a lower seven-bay range with a five-bay blank arcaded centre, the arches rusticated, ending in a futher more modest Italianate tower crowned with a belvedere; behind it lay the service accommodation.

The west front, being overshadowed by the rising ground, was left plain. The stone was taken from an adjacent outcrop; the roof was slate.

It was originally intended that there should be a substantial apsidal Romanesque chapel on a mound to the south of the house connected to the west front by a steep covered way, and with a bell tower carrying a slim spire, the whole ensemble to lie on a massively constructed terrace punctuated by urn-topped buttresses.

However, the death of the elder Samuel Grimshawe meant that this work went unfinished, as S.D.Grimshaw, the son, seemed to lack his father’s enthusiasm for building. Instead the chapel mound was adapted as family burial ground, and a chapel was instead inserted into the upper storey of the north-east wing.

The grounds were spectacularly planted with rhododendrons and serpentine walks creating a highly romantic aspect on the ground falling away from the fells above to the immature Goyt below with its ancient bridge. They were later opened to the public.

There was also a private adit coal-mine in the grounds which kept the house and neighbourhood supplied with fuel. 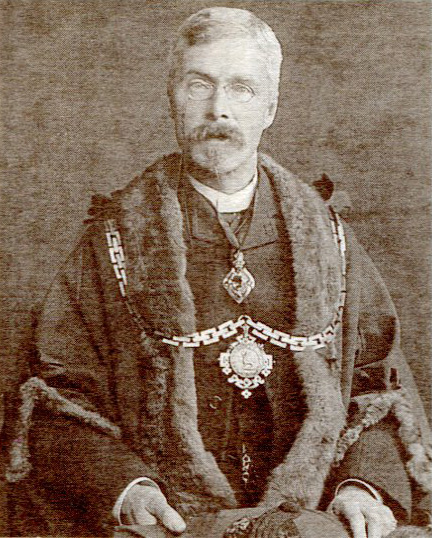 Above: This photo of is from Gerald Hancock’s ‘Goyt Valley Romance‘ and captioned ‘Helier Gosselin, Mayor of Hertford’.

On the death of S.D.Grimshawe at about the turn of the century, the estate passed to his daughter’s husband, H.R.H.Gosselin of Bengeo Hall, Hertfordshire, who assumed the additional surname of Grimshawe and died in 1924.

His sister remained there until 1930 when she died and the estate was sold to Stockport Corporation. They let the house to the YHA until 1934, after which it fell gradually into desuetude, and the grounds rapidly ran wild.

In 1936 the area was transferred to Derbyshire, and in the 1960s the pretty Goyt was dammed and the Grimshawe’s park was suddenly marred by a dreary and featureless sheet of water, now much given over to ‘leisure’.

The house itself was a picturesque ruin until the coming of the reservoir but thereafter was all dismantled except for part of the south front which was consolidated. The grounds have been controlled and turned into a series of trails for the edification of visitors, under the control of the Peak Park Joint Planning Board.

*Questionable facts
I don’t think ownership of the hall passed to Mary Grimshawe’s husband, Hellier Gosselin, following the death of Mary’s father, Samuel, in 1883. My understanding is that Samuel’s wife, Jessie, inherited the estate. And left it jointly to both daughters – Mary and Genevieve – on her death in 1893.

And the first Samuel Grimshawe wasn’t Catholic. It was his son – Mary’s father – who converted. Also, the architect of the hall was Alexander Roos – not Alexander Hope. And I don’t think Hellier’s sister stayed on at the hall after his death in 1924 until she died in 1930 – that would have been Mary Grimshawe. Finally, the hall was never a youth hostel (see this post).