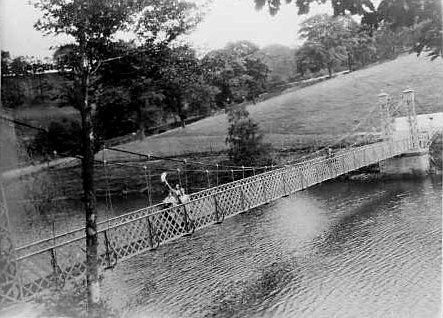 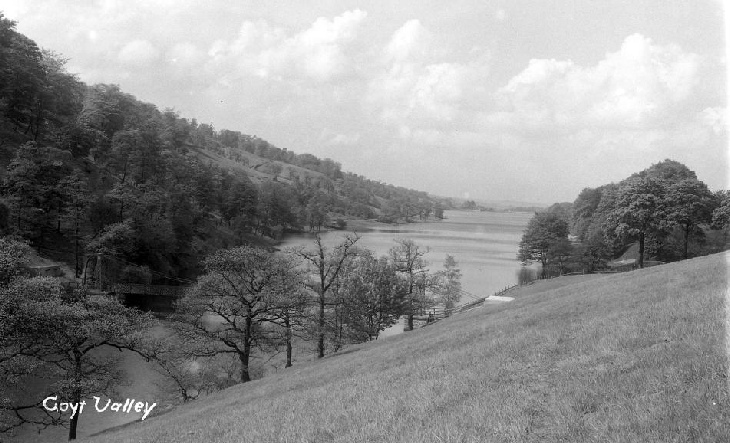 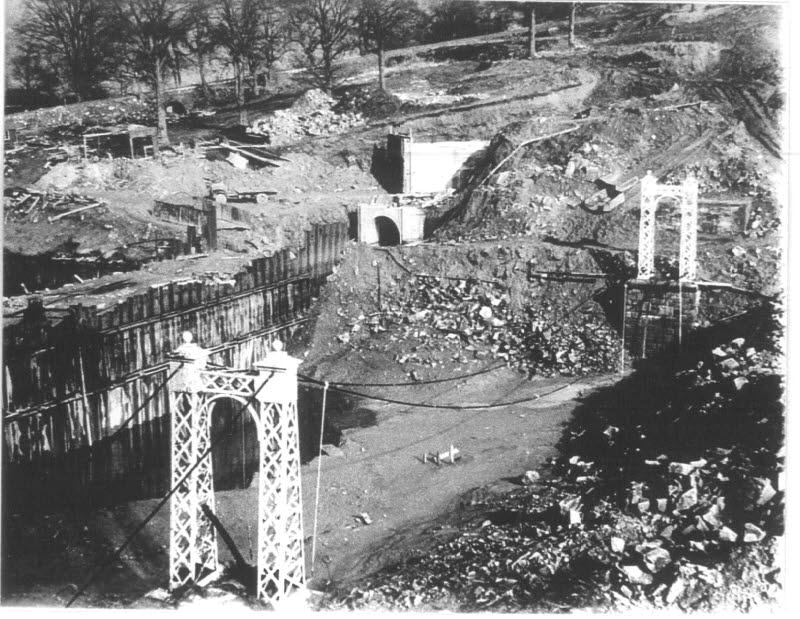 Above: This photo shows the suspension bridge being dismantled during the construction of Errwood Reservoir in the mid 1960s. 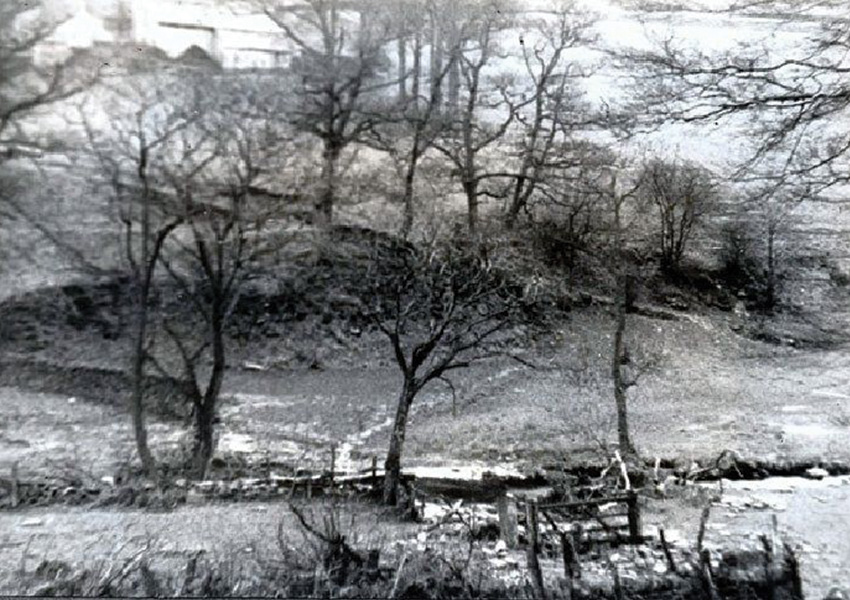 From RS-S: This is quite an interesting old photograph taken before the flooding of the Valley. It shows the ford below Bunsall Farm, which you can just make out at the top of the picture. The suspension bridge was later constructed at this point – and it was this crossing that determined the position of the bridge.

I’ve always been curious about the small but very picturesque suspension bridge that can be seen in various old photos of the valley, wondering when it was built, what happened to it, and where it was situated.

It was a comment in the Memories of Crichton Porteus posted last week which seemed to answer some of these questions;

So it seems the bridge was created just before the completion of Fernilee Reservoir. And since it was very much a pedestrian-only bridge, it must have been to provide easy access for local people to walk from one side of the valley to the other once the valley had been flooded. 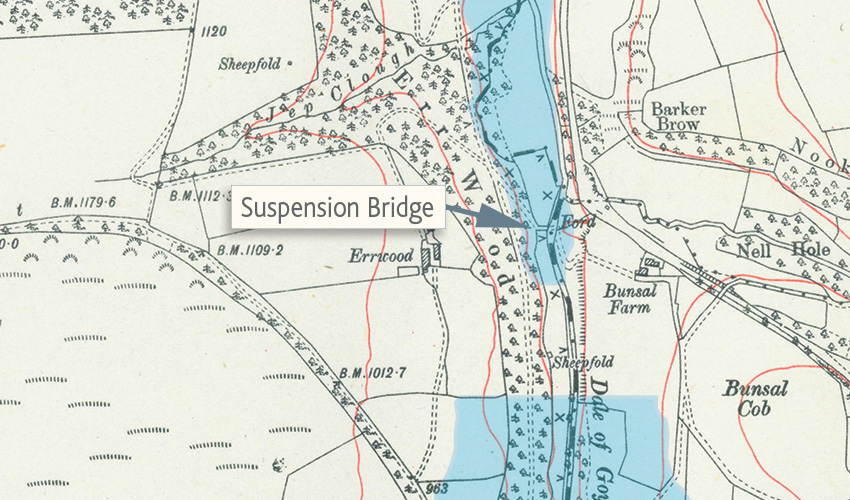 Click the map to enlarge it. The blue areas show the position of today’s twin reservoirs.

Looking more carefully at the old photos, it’s clear that it spanned the southern part of Fernilee Reservoir – close to the foot of the present-day dam wall which divides the twin reservoirs.

Examining an old OS map (see above), reveals there was once a ford around this point across the Goyt, leading from behind Bunsal Farm all the way to the old Roman road known as The Street. The footpath on the opposite side of the valley – which can be seen in the top photo – can also be identified on the map.

So the suspension bridge must have reconnected both sides of the existing right-of-way footpath after the valley had been flooded. Sherlock would have been proud of me! But I’m still not sure when it was demolished. I’m guessing it must have been during the final stages of the construction of Errwood Reservoir – so some time during the mid-1960s.

I have heard that it’s possible to find some evidence of the bridge foundations. I’ll have to have a closer look next time I get the opportunity. In the meantime, if anyone has any more old photos, or can remember the bridge and knows when it was destroyed, please leave a comment below, or get in touch using the contact form.

Page update: My thanks to Gail for sending this photo of the suspension bridge taken in 1937, and a copy of the original tender document for its construction dated 1933 (click to enlarge). 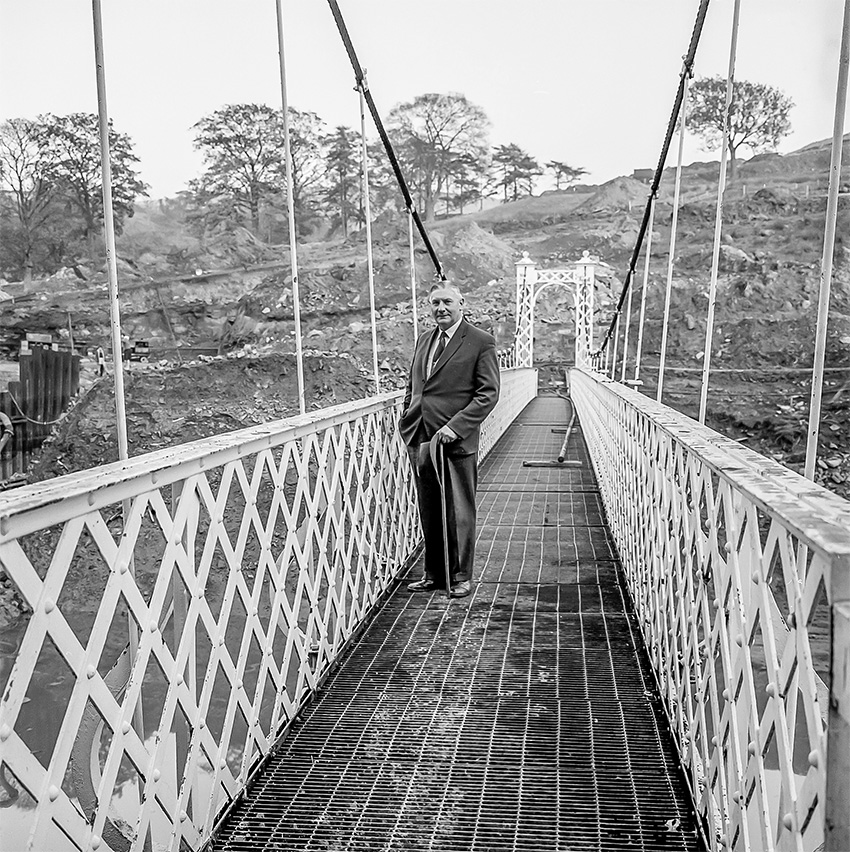 Page update 16.4.19: My thanks to Dickie (see comment below) for sending this wonderful photo of his father standing on the suspension bridge (click to enlarge).

It was taken shortly before it was dismantled, during the construction of Errwood Reservoir to the north. (The building work can be seen in the background.)