Above: I found this 1815 plan in The Derbyshire Records Office. Stonyway Bar is shown alongside the existing turnpike.

The red line shows the proposed new route which avoided the worst of the steep slopes. We think the toll booth was moved to where the old and new roads intersect.

There’s been a lot of discussion on the Goyt Valley Facebook Group about exactly where Stonyway Toll House once stood. But I think we’ve now got it figured.

In his book ‘Turnpike Roads  Around Buxton’, Alan Roberts mentions a map that was deposited with plans for the new turnpike in 1819. Following his advice, I went to Matlock’s Derbyshire Records Office to see if I could track it down. And found two very similar maps – one dated 1815 (above) and another from 1819.

Both maps show that Stonyway Bar was on the right of the Old Buxton to Macclesfield turnpike. But further down than was initially thought; on Ankers Lane (the road to The Stanley Arms). 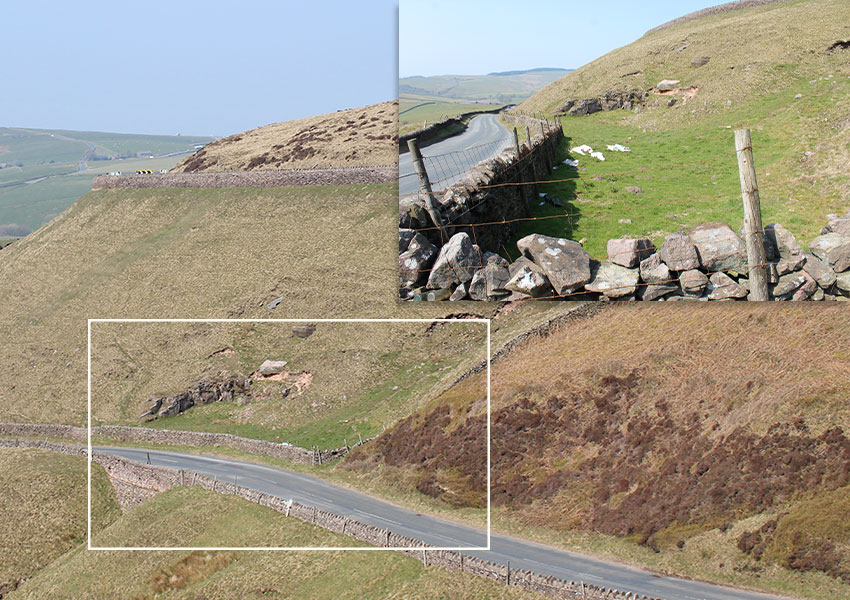 It wasn’t that difficult to identify the spot (above), just a short distance down from the junction with today’s A537. Alec discovered an 1890s map which appears to show buildings on the ground. But they were probably just ruins at this stage (or perhaps the stone wall boundary) as the toll gate was relocated when the new turnpike opened in 1823.

This fade shows the area known as Stonyway (called Stonway on the 1890s map and Stoneway on the hand-drawn version). It was where the old and new turnpikes intersected.

We still don’t know exactly where the toll house was moved to. The most likely spot is marked ‘Stonway TP’ on the map fade. And close to today’s Peak View Cafe, which is on the satellite view.

It would have been demolished when the turnpike finally closed in 1878, some 20 years before this map was published. And all signs that it ever existed have long-since vanished from the landscape. 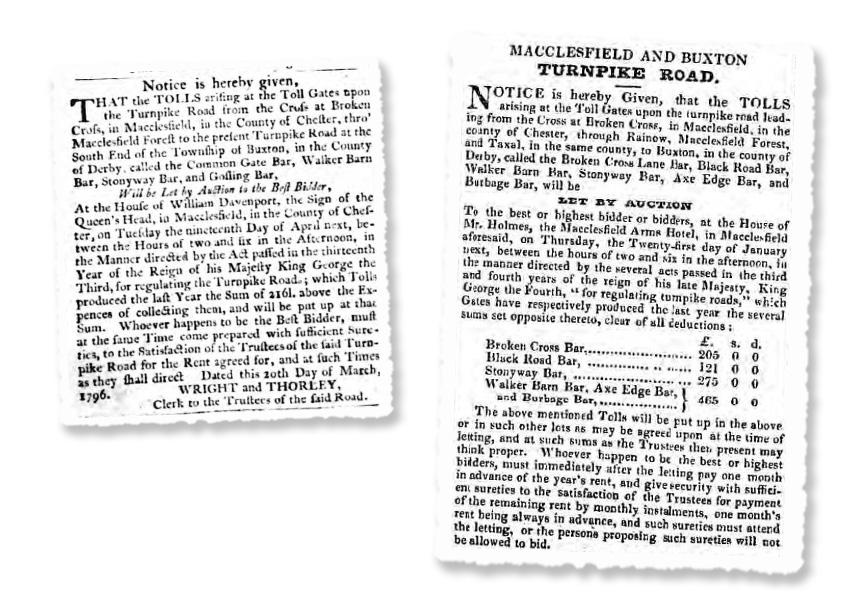 Mike has managed to track down two press clippings mentioning Stonyway Bar (click to enlarge). The first is from the 22nd March 1796 edition of the Manchester Mercury and gives notice of an auction to purchase the rights to manage the first Buxton to Macclesfield turnpike…

…which Tolls produced the last Year the Sum of [£]2161 above the expense of collecting them, and will be put up at that Sum.

The second appeared in the 23rd December 1835 edition of the Derby Mercury and gives notice of an auction to purchase the rights to manage the new Buxton to Macclesfield turnpike. This report includes details of the annual proceeds from the various toll booths along the route…

These total £1066 after all deductions – some £1000 less than had been collected some 40 years earlier. Which was a sure sign that the turnpikes were struggling to make ends meet. The coming of the railways would soon provide the final nail in their coffin.

Mike has also managed to track down this 1871 census record for Stonyway Toll Bar, showing Edwin Pott and his wife, Mary, lived here with their 7-year-old son, Ralph, 1-year-old daughter, Elizabeth, and his 71-year-old father, George.

By the time of the 1881 census, the Potts had moved to Wildboarclough. Edwin is described as a coal-miner and his father is no longer listed, so had probably died. They’d also had another daughter, Frances Ann, who was 9.

There’s also an 1841 census record for Stoney Way, which may be the toll house, listing John Etchells (70) and Sarah Etchells (65).