Above: The proposal to improve and extend the C&HPR was submitted in 1854, just 23 years after the line had been opened.

Above: Bottom right is the exit of Burbage Tunnel and top left is the canal basin in Whaley Bridge. The yellow line is the original C&HPR which was abandoned in 1892.

The orange is the 1854 proposed line which avoided the need for all the steep inclines. The brown is Long Hill, and the blue is the River Goyt. The grey rectangle shows the area covered by plan 2.

In this second part of Alan Robert’s article on railways through the Goyt Valley, he explains how the attempts to improve the Cromford & High Peak Railway by avoiding the steep inclines ended in failure. (The text is Alan’s but the captions are mine.)

Following the failure of the MBMMJ 1846 proposal (see previous post), things went quiet as far as the Goyt Valley was concerned until 1854. The Cromford & High Peak Railway had been limping along against the challenge imposed by the growth of competitors and in 1854, under the leadership of Captain Moorsom, several upgrades to the line were proposed, one of which was for the stretch in the Goyt Valley.

Plans were deposited in 1854 showing a major deviation to the route, starting at the northern end of the Burbage Tunnel. Whereas the original route from the tunnel was fairly level to the top of the Bunsall incline, the proposed deviation followed a similar route, winding along the edge of the hills but descending at a steady 1 in 40. 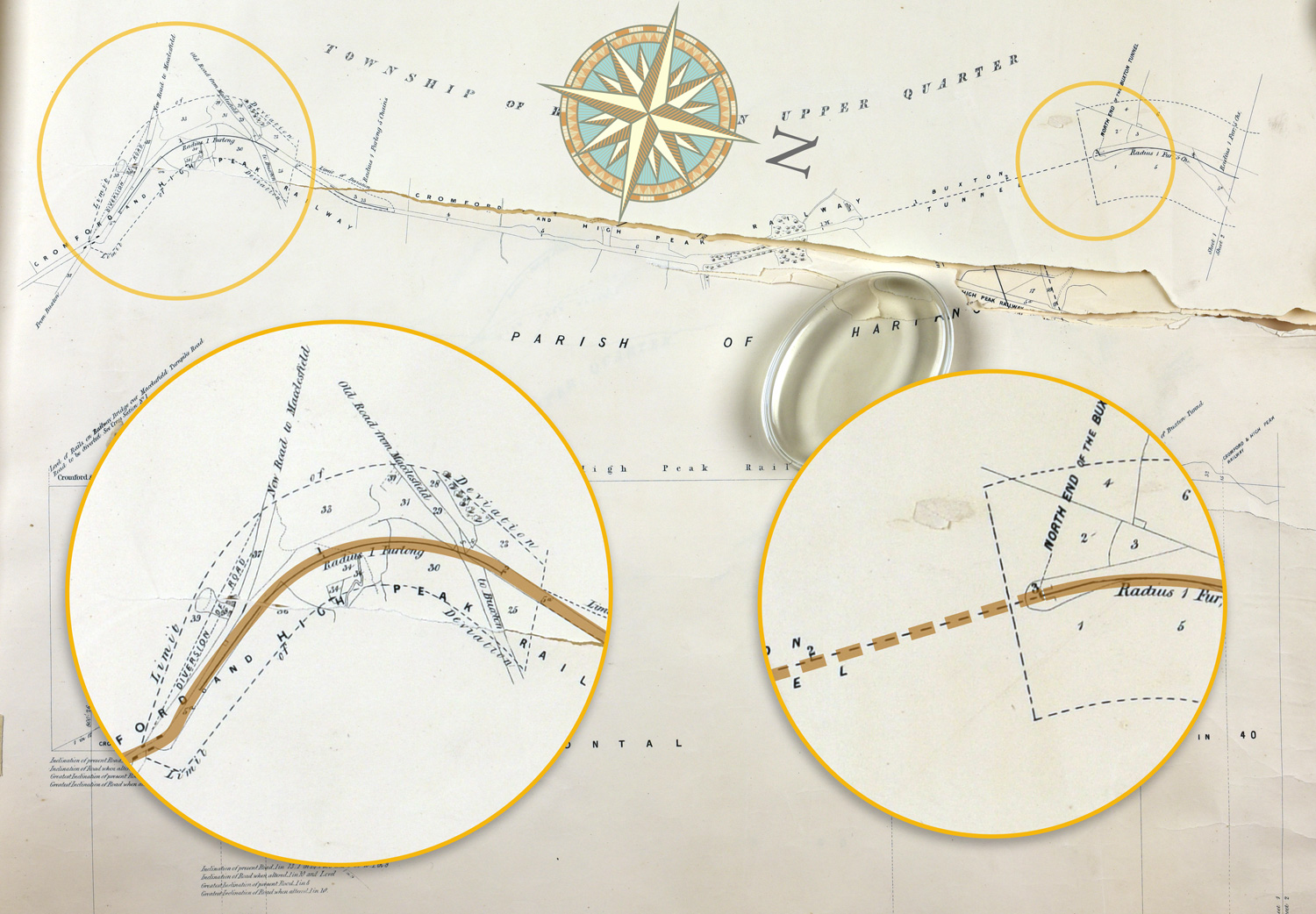 Plan 1: The plans weren’t easy to work out as there’s no compass showing north (I’ve put one in to help). The left inset shows the route further south, on the outskirts of Buxton (click to enlarge). The proposed route followed the existing C&HPR line from here until it exited Burbage Tunnel (right inset).

It crossed the Bunsall incline near Bunsall Cob at the lower end of the incline, close to a small reservoir still shown on modern maps. It then made its way along the valley past the edge of Calfhay Wood and through Fernilee village on a fairly straight route towards Whaley Bridge where the plan included a 110 yard viaduct crossing the Goyt and joining the proposed Stockport, Disley and Whaley Bridge line that duly opened in 1856. 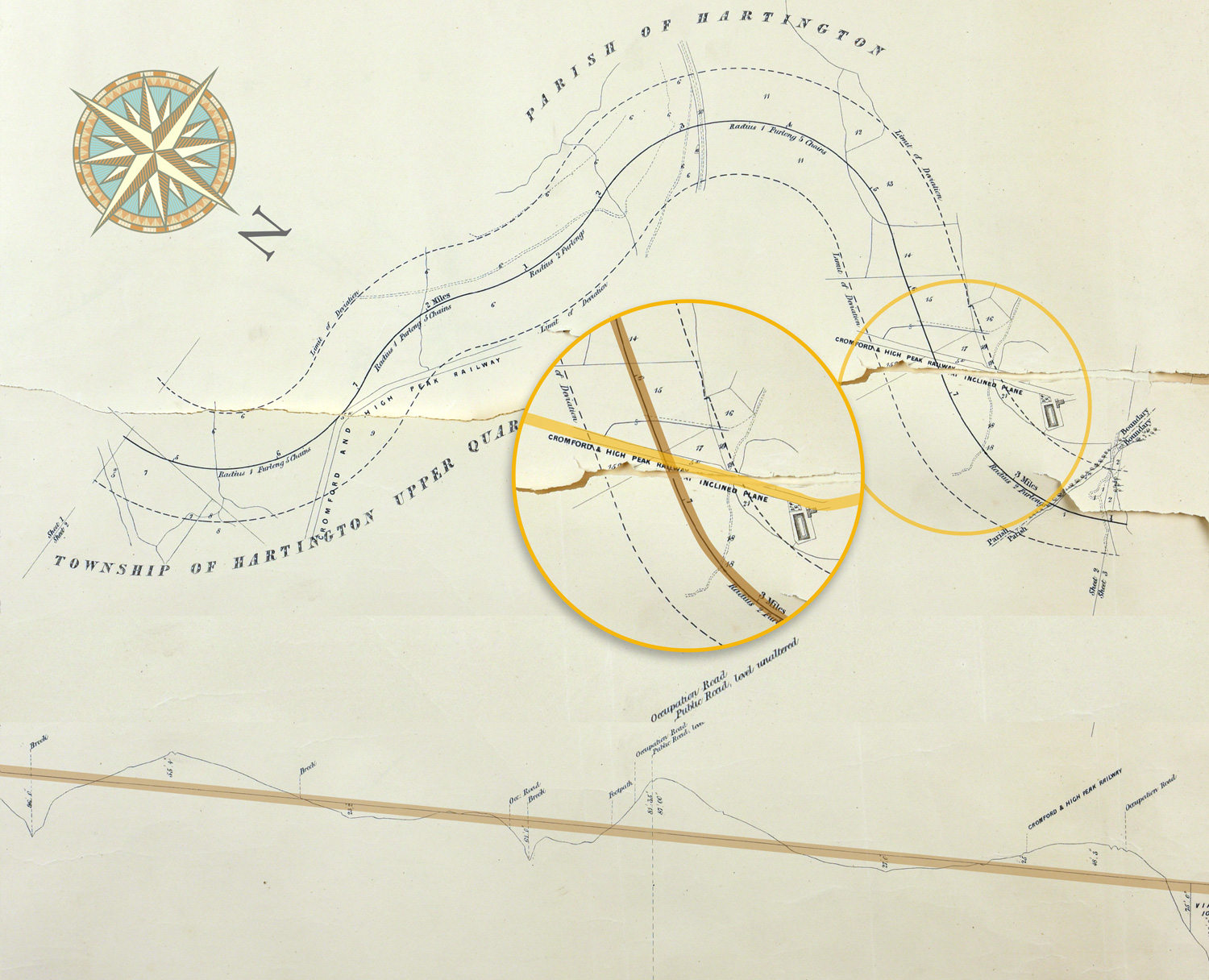 Plan 2: The next plan north shows where the proposed route met the existing C&HPR Bunsal Incline, before skirting around the landscape to the west at a gentler angle, and then crossing the incline close to the small reservoir, half-way down the slope (click to enlarge).

The elevation at the bottom shows how the incline has been reduced from 1:7 on the Bunsall Incline down to a more manageable 1:40. I’ve put a grey rectangle on the larger map to make it easier to identify the area.

Like the earlier one, this CHPR plan was never put into action. The CHPR was leased to the LNWR in 1862 and the LNWR took over full ownership in 1887.

A period of substantial modernisation of the line took place including connections to the national network near Buxton and large embankments built between Harpur Hill and Ladmanlow. The CHPR route between Ladmanlow and Whaley Bridge closed in 1892, when the Goyt Valley lost the only rail route that was actually built.

In 1890, a new company was formed named the Lancashire, Derbyshire and East Coast Railway (LDECR) with a proposed route 170 miles long running from Warrington to Sutton on Sea on the east coast via Knutsford, Buxton and Chesterfield.

From Knutsford, the proposed route ran through Rainow and then to Lamaload, where a tunnel was proposed running to the Goyt Valley, crossing the river and then entering a second tunnel to Burbage. On the Cheshire side, the planned route passed close to the river Dean to the tunnel entrance at (397.2, 375.2), now part of Lamaload Reservoir, with a length of 4210 yards and a gradient of 1 in 100, exiting the tunnel at (401.4, 374.4). 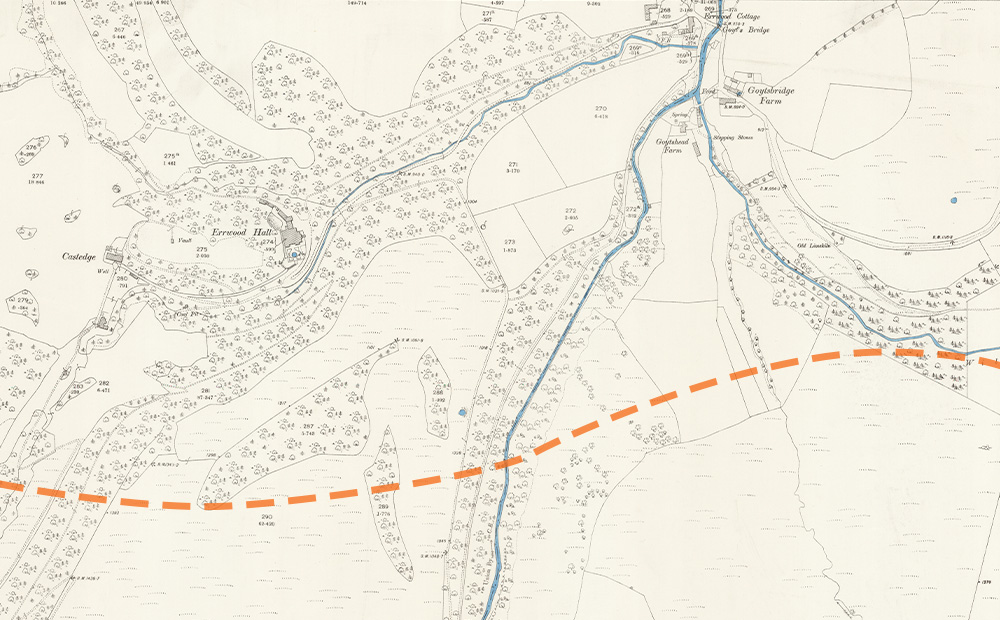 Above: Alan didn’t obtain detailed copies of the planned route of the LDECR line, but he thinks the dash line shows how close it would have come to Errwood Hall (click to enlarge).

It crossed the Goyt with an S shaped curve to align the route with the valley of Wildmoorstone Brook with the rail line 65 feet above the river and then entered the Derbyshire tunnel at (402.0, 374.6). The gradient in the tunnel was 1 in 136

That concludes the list of plans submitted for Goyt Valley routes but there were some others that suggest links between Buxton and Macclesfield. Some of these proposed tunnels beneath Axe Edge to give a route to the Dane Valley past Three Shires Head and continuing to Congleton, with a link from Congleton to Macclesfield.

Others include routes running from Congleton to Macclesfield with a link to Whaley Bridge via Rainow, connecting with the line to Buxton. However, these routes only relate to the outer fringes of the Goyt Valley.