Above: The proposed 1846 route of the MBMMJ railway would have cut right through the centre of Goyt’s Bridge. 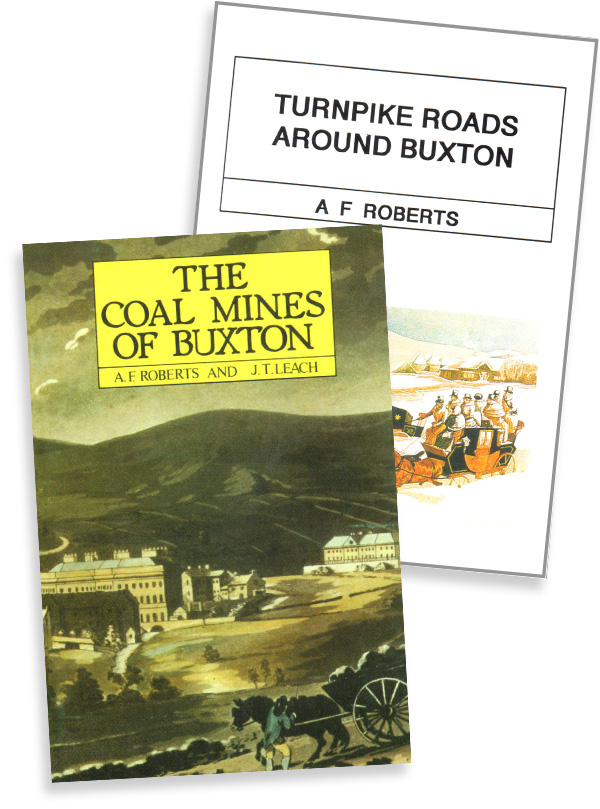 Above: Two of Alan’s books on local history; The Turnpike Roads Around Buxton and The Coal Mines of Buxton (co-authored with John Leach).

My thanks to local author, Alan Roberts, for this article on a number of proposed railway routes that would have come though the Goyt Valley. I’ve split it into two sections – click here for part 2 on improvements to the C&HPR. (The text is Alan’s but the captions are mine.)

The stretch of the Goyt Valley from Axe Edge to Whaley Bridge is an area full of visual and environmental interest, much enjoyed by walkers, cyclists and nature enthusiasts. Think how different it would be if the Buxton to Manchester trains rattled along it, twice an hour in each direction!

Of course, the valley did once have a railway: the Cromford and High Peak Railway (CHPR) opened in 1831, running from Cromford to Whaley Bridge, which emerged from Burbage Tunnel and followed a level curving route to the top of the Bunsall incline where it descended a steep slope into the Goyt Valley, then followed another fairly level stretch towards Fernilee. This would have been a much quieter intruder as the wagons were horse drawn.

The CHPR line between Ladmanlow and Whaley Bridge was closed in 1892 but it left some useful features behind. When Errwood Reservoir was built in the 1960s, Goyt Lane, which led down to Goyt Bridge and Errwood Hall, was closed to traffic, although still in use as a footpath, and the road was diverted on to the Bunsall incline where it continues to give a straight steep access to the Goyt Valley.

Also, the area at the top of the incline where the winding engine that hauled wagons up the incline was located, proved useful for a car park with excellent views of the valley and access to footpaths. 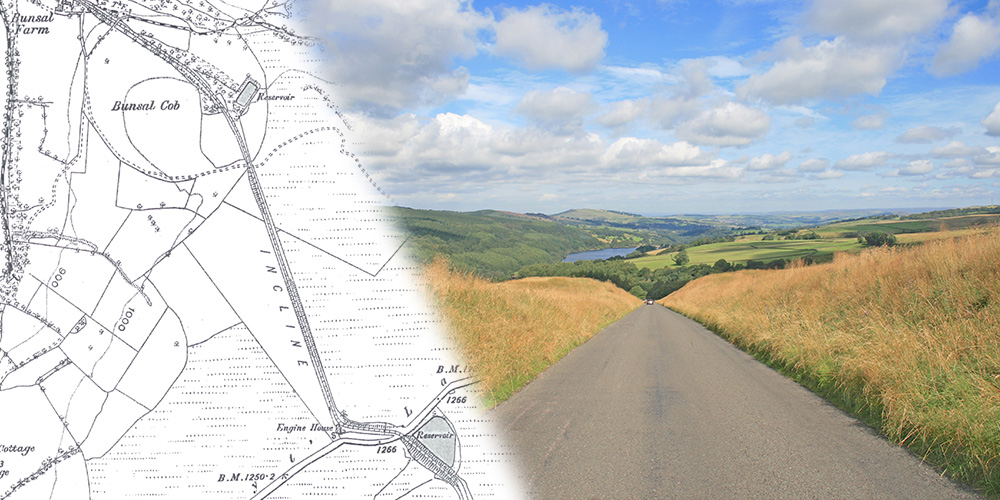 Above: Most people arrive at the Goyt Valley using the Long Hill road between Buxton and Whaley Bridge. But not many realise that the long straight slope was once an incline on the Cromford & High Peak Railway. (Click here for more on the C&HPR.)

In the early 1840s, following the development of the first steam locomotive on railway systems, “railway mania” seized the country as investors saw the potential of railway links between key locations. Dozens of proposals were put forward for railway lines, each one of which would have to be authorised by an Act of Parliament; these proposals are now lodged with local Record Offices.

Given its strategic position between such important centres of the Industrial Revolution as Derby, Stoke, Manchester and Sheffield, the Peak District saw proposals for many such links despite the difficulties imposed by its hills and dales.

Above: The blue line shows the route of the 1831 C&HPR (click to enlarge). The red shows the proposed route of the new MBMMJ line running along the other side of The Goyt. The orange rectangles show the areas covered by pages 2, 3 & 4 of the plan.

In 1844, a plan was deposited by the Manchester, Buxton, Matlock and Midland Junction Railway (MBMMJ for short). This proposed route was similar to the line that actually opened in 1863 as far south as Whaley Bridge but it then headed off towards Buxworth, passing north of Chapel en le Frith and then curving round to Dove Holes. The final stretch, from Dove Holes to Buxton, was followed when the line was actually built in the 1860s.

This was followed by a second MBMMJ plan deposited in 1846 which followed the same route as far as Whaley Bridge but then headed straight for the Goyt Valley. The planned route passed close to the northern corner of the Toddbrook Reservoir dam at the same level as the top of the dam. 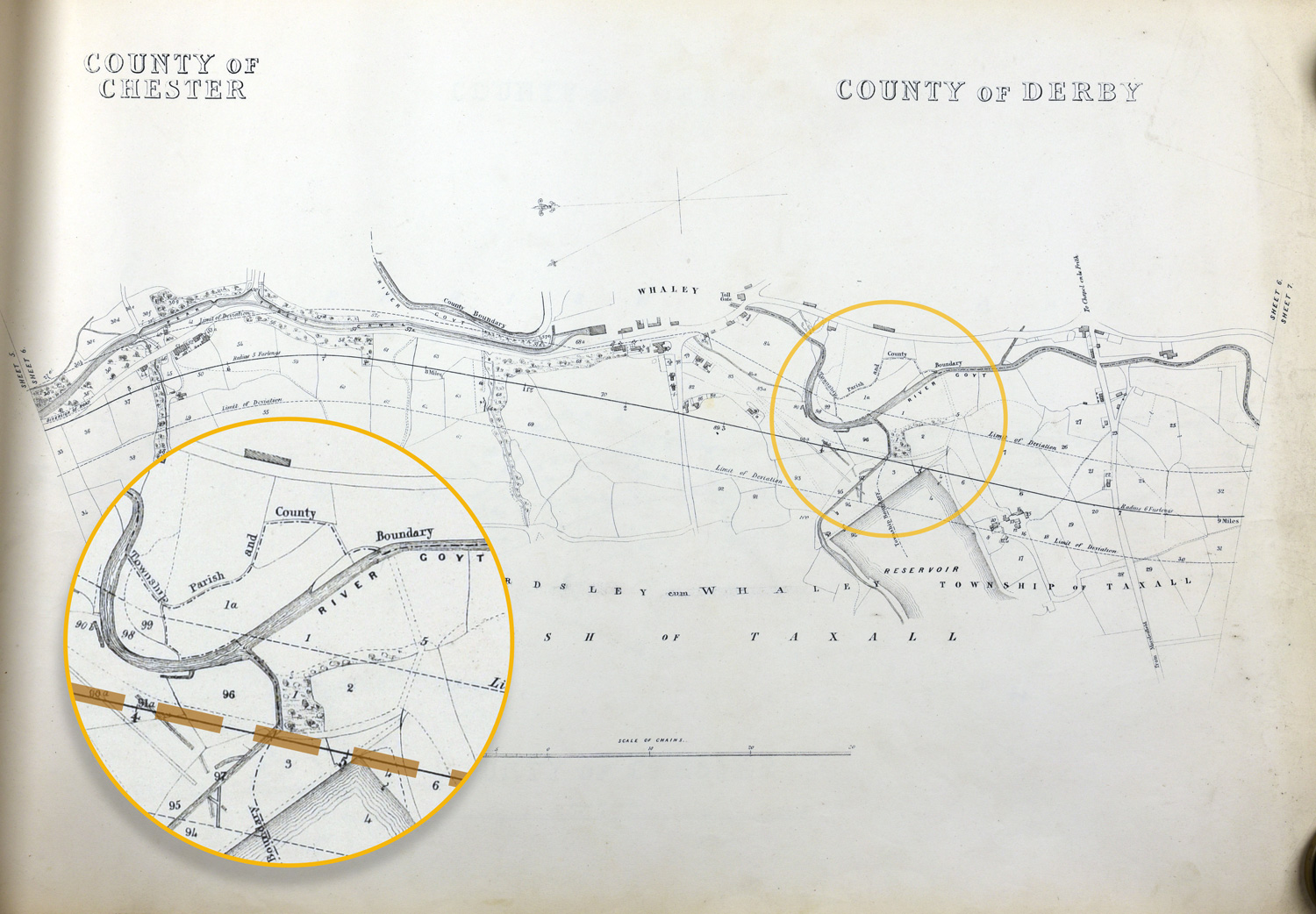 Page 1: This revised 1864 plan shows the proposed route from just north of Whaley Bridge, past the tip of Toddbrook Reservoir (inset), south towards Taxal and the Goyt Valley (click to enlarge). The Long Hill road to Buxton runs across the top of the map. The dash lines either side of the solid one show how far the route may have had to deviate.

It then crossed the road leading to Rainow about two hundred yards uphill from the junction with the Buxton to Whaley Bridge road and headed along the valley with a gradient of 1 in 75, passing close to Taxal Church about one hundred yards up on the western side. 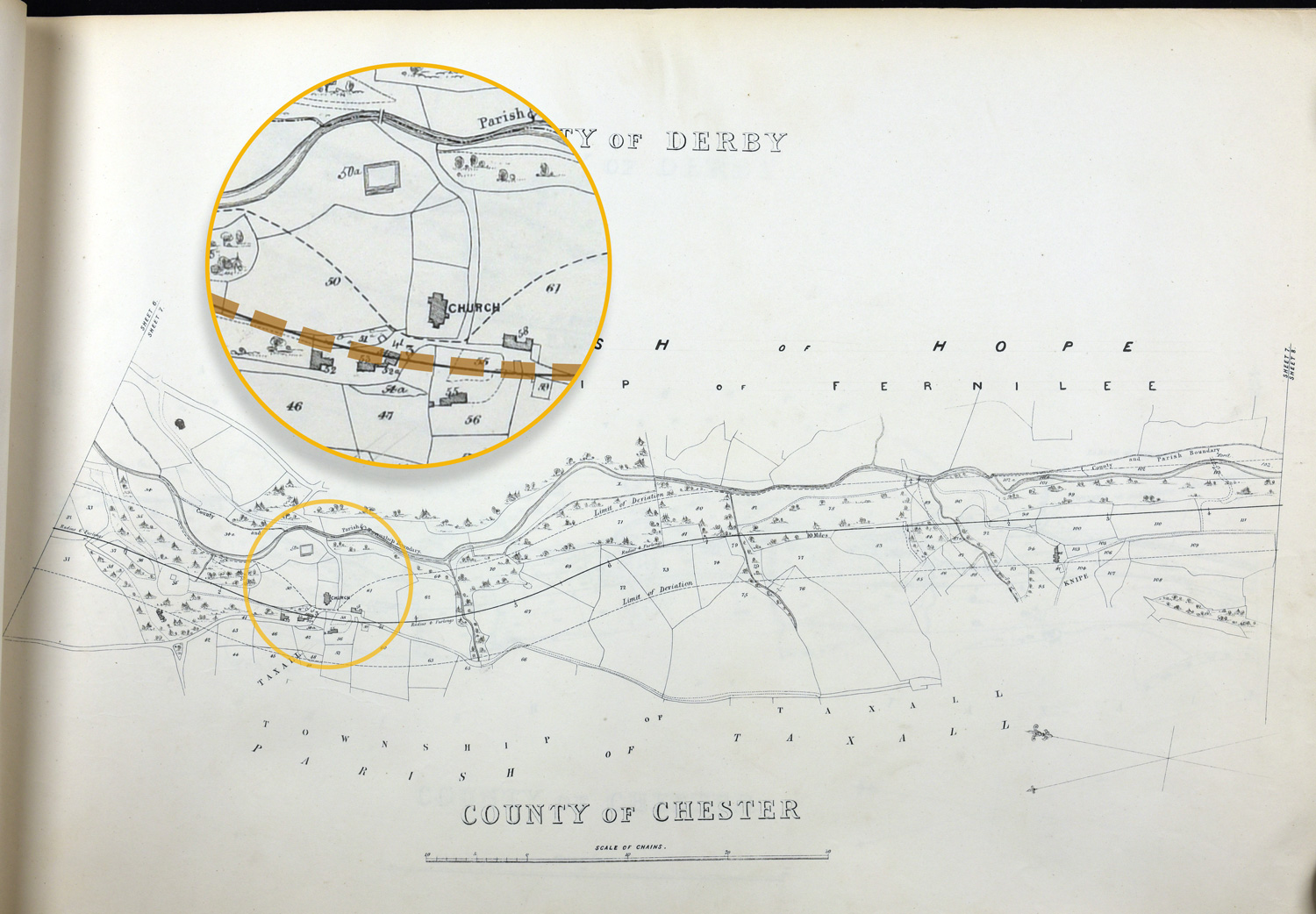 Page 2: This plan (click to enlarge) shows the next section south, with the line running between Taxal Church and the vicarage. You have to wonder what the church authorities would have made of this idea! 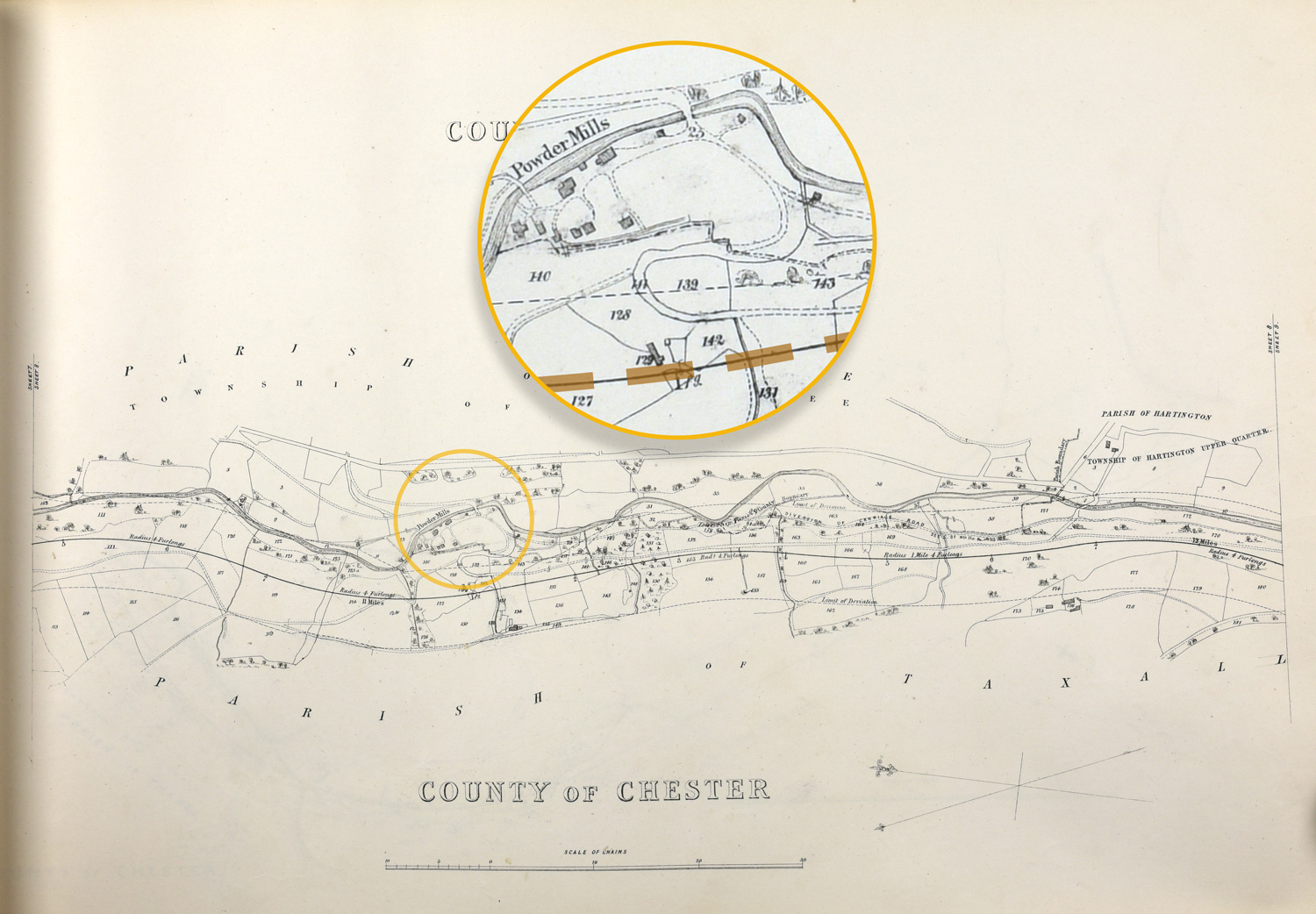 Page 3: The inset shows the line passing to the west of Fernilee Gunpowder Mill. On the opposite side of the Goyt is the existing line of the Cromford & High Peak Railway which today forms the path beside the reservoir. (Click to enlarge.) 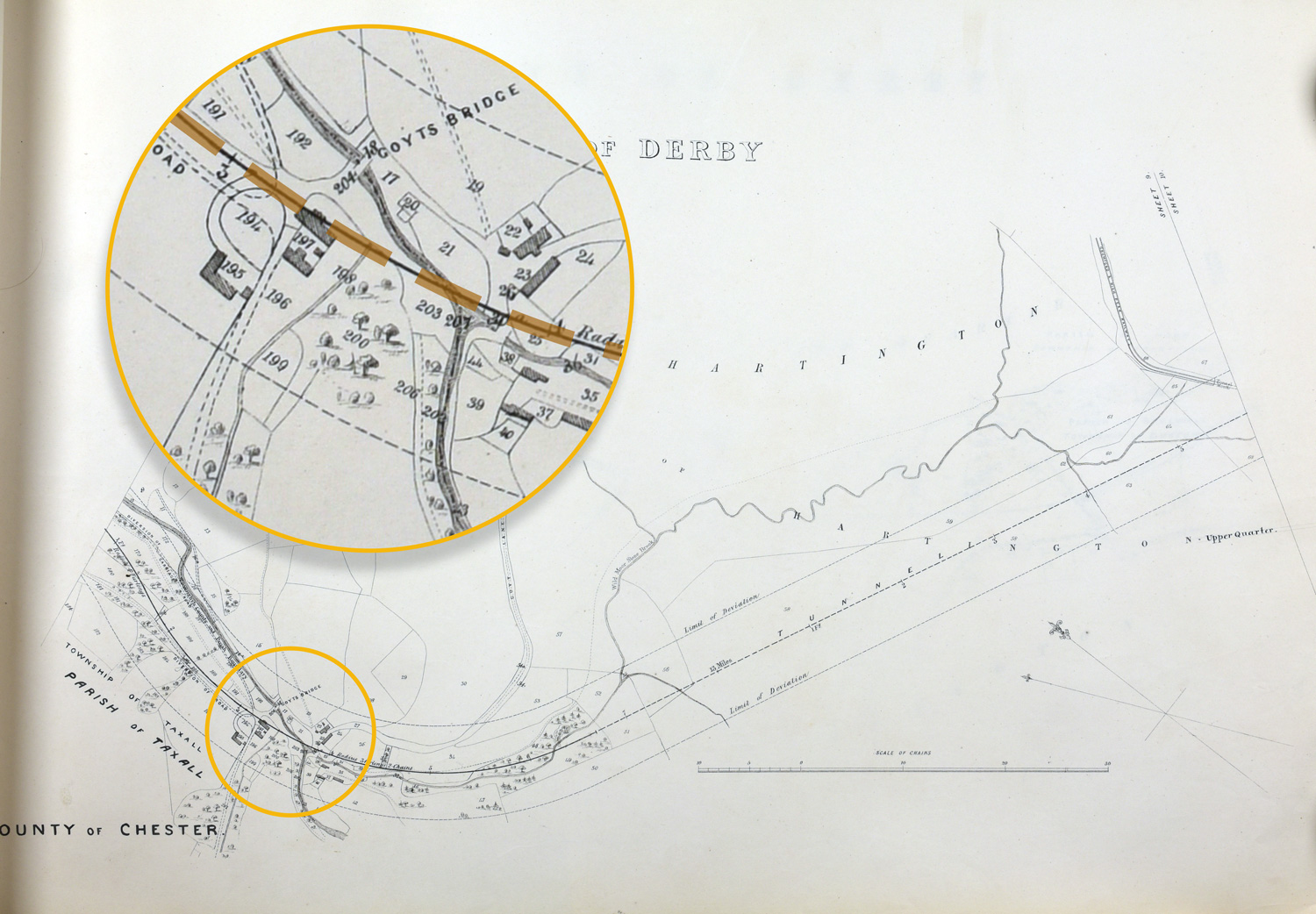 Page 4: The proposed route would have cut right through Goyt’s Bridge, crossing The Goyt close to the packhorse bridge (click to enlarge). Old Goyt’s Lane winds down from Long Hill. The building numbered 197 is Errwood Cottage, standing beside the entrance drive to Errwood Hall. The 1.5 mile tunnel is shown as a broken line.

The tunnel length was given as 2640 yards, rising at a slope of 1 in 100. The open stretch across the Goyt Valley included three small bridges crossing existing roads and tracks with the rail line 48 feet above the river level. 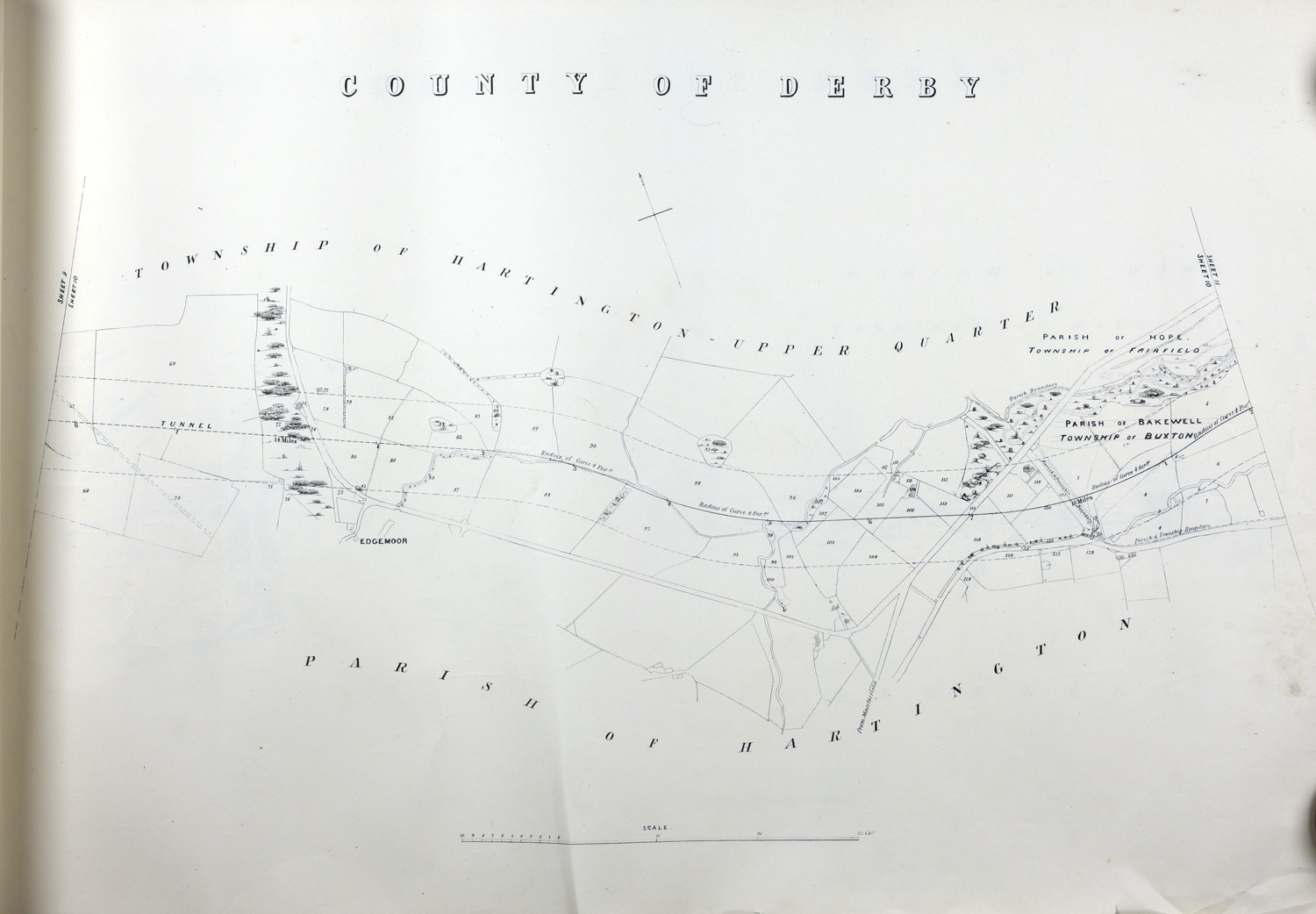 Page 5: The line passed under the top end of Bishop’s Lane before emerging from the 1.5 mile tunnel on its way to Buxton.

The tunnel emerged near Edgemoor at the top of Bishops Lane in Burbage, crossed St John’s Road near Otter Hole Farm and headed to a tunnel beneath the Market Place in Buxton, near Fountain Street. It then ran along the Wye Valley past Kings Sterndale, crossing the Wye near Topley Pike. 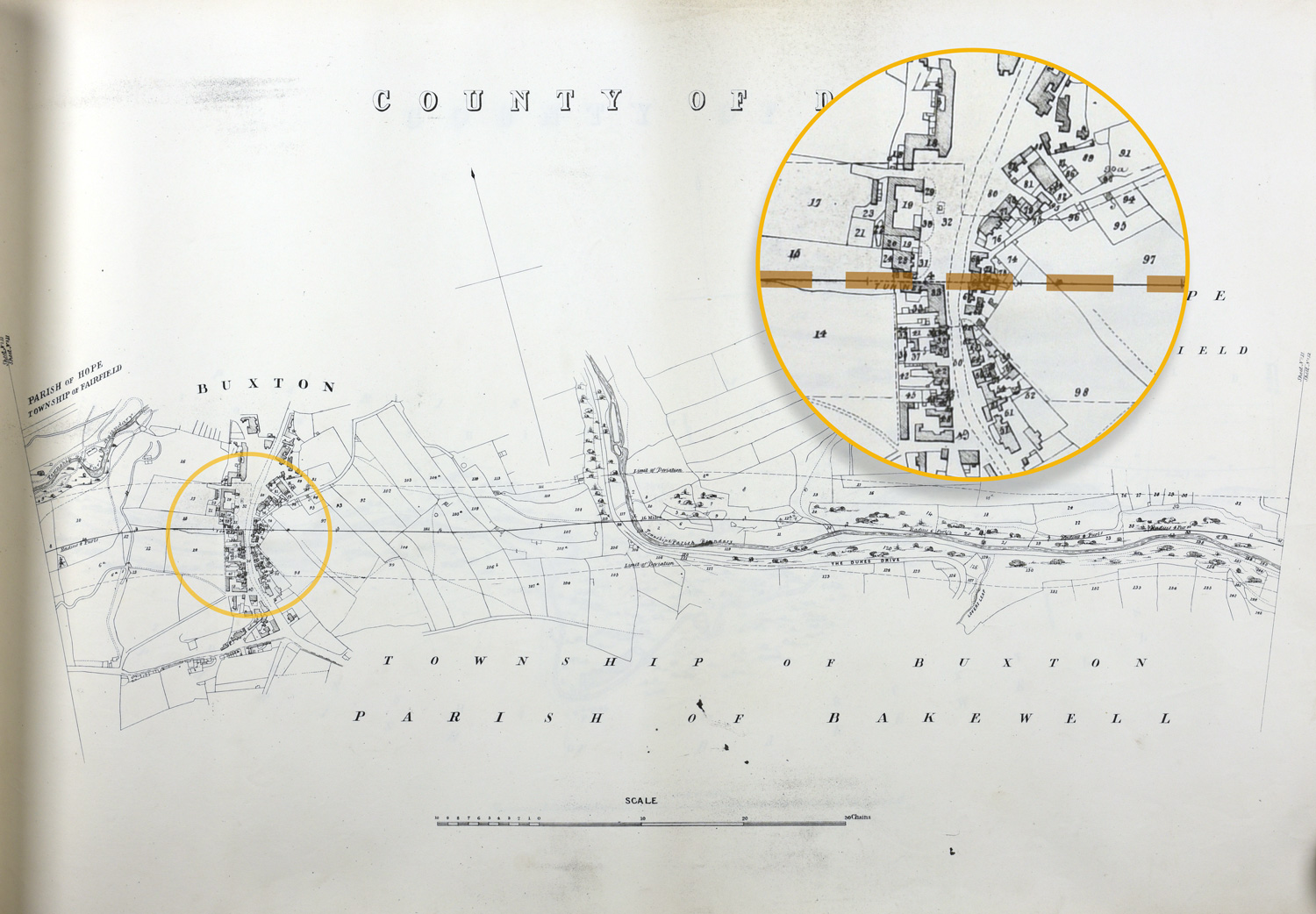 Page 6: The inset shows the line passing through a short tunnel under Buxton’s Market Place before heading towards Kings Sterndale. The building numbered 19 on the plan is where Sainsbury’s now stands, with Terrace Road heading down the slope at the top of the plan.