Above: I took this photo in May 2018, some 18 months after the FC started clearing the rhododendrons around Errwood Hall .

I was hoping they’d be allowed to regrow. But that’s not going to be the case.

The recent news that the Forestry Commission will be removing what remains of the rhododendrons around Errwood Hall (see bottom of this post) has sparked some sharp reaction from many on the Goyt Valley Facebook Group. Many of us feel that it’s a great shame, and are less than convinced with the FC’s explanation that there’s no alternative.

They say the rhododendrons need to be destroyed because they can carry a disease called phytofra, which effects fir trees, and larch in particular. Larch is the biggest cash crop for the FC in the valley, so I understand why they want to protect them. But many of us prefer to see rhododendrons rather than firs. And I’d have thought the valley was large enough for both to grow.

I first posted about the destruction back in January 2017 (click to view). And later added the ‘then & now’ fade below, comparing views along the track to the hall ruins both before and after.

Many of us have very fond memories of the rhododendrons in full bloom, all around the valley. They were brought here by Samuel Grimshawe, the owner of Errwood Hall, in his ocean-going yacht. And have been attracting praise from visitors for well over 150 years. Here’s a typical example from a Victorian writer:

“Errwood when the rhododendrons are in full bloom is a place difficult to imagine and impossible to describe. They rise from rocks in ramparts of rose colour and Pyrian purple, tier above tier, tint upon tint, until, with the blue black firs and pines, they break the diversified sky-line.” 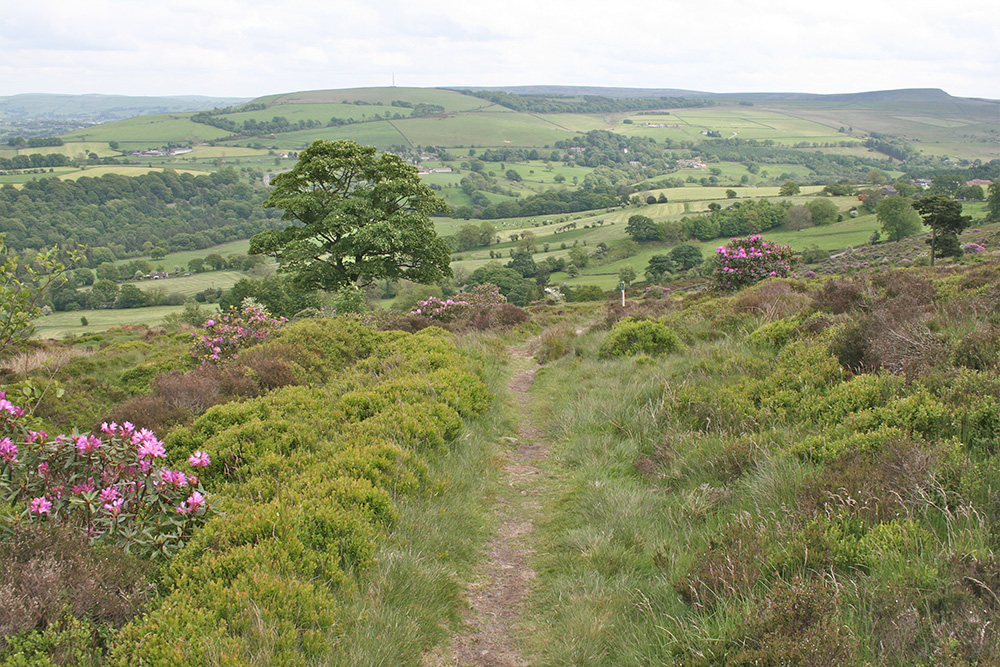 There was a similar clearance around the same time on the slopes beneath Taxal Edge. I don’t know whether the FC was responsible for this. But the area was allowed to regrow – complete with rhododendrons – and is now a really picturesque path, coming down to Taxal (above).

We need some way to persuade the FC that they can to do something similar around the ruins of the hall. Even if it means not replanting fir trees so close. If anyone has any ideas on how we’d do this, I’d love to hear them. Maybe we could start a petition?

Quite a few people have been in touch since I posted this, explaining that the Forestry Commission has been issued with a ‘Statutory Plant Health Notice’ to remove the rhododendrons, so they don’t have any choice in the matter.

They’ve also given me links to information explaining just how poisonous and invasive they are. Adding that it’s an offence to plant or grow them in the wild. Here’s a couple…

So before sounding off, perhaps I should have checked my facts. But I still think it’s a great pity that the authorities haven’t replanted the slopes around the hall with trees and shrubs that are as attractive and colourful as the rhododendron.