Life for the killers

Above: The Manchester Evening News announces the verdict: Life for the three of the convicted murderers. The ring-leader, Murray, was sentenced at a later date. 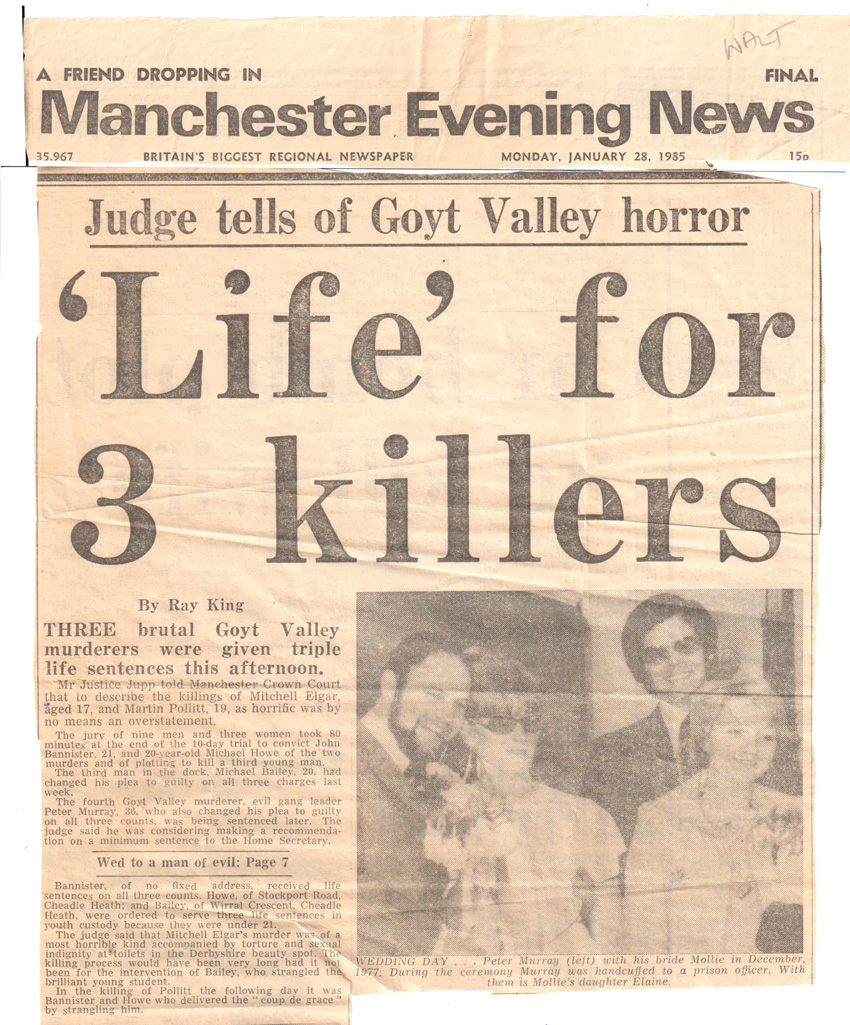 Above & below: click on either image to view a pdf of each page. 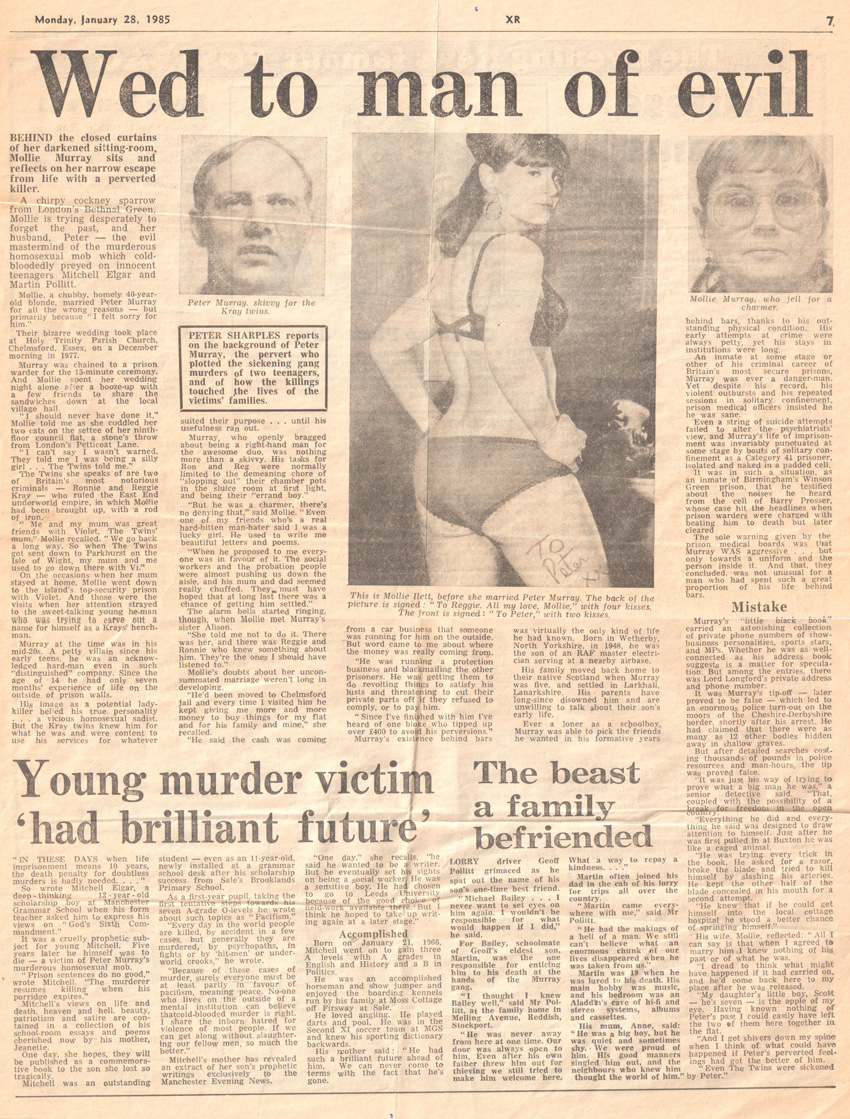 Like many other lovers of the Goyt Valley, I was horrified to hear about the murders that occurred here in October 1983. And surprised that I’d not heard about them before.

It all came to light when Michael got in touch to ask if I’d be interested in some papers he’d recently been sent (see previous post). As well as a collection of fading aerial photos, they included some yellowing press cuttings from the 28th January 1985 edition of the Manchester Evening News.

The front page headline announced the judge’s sentences: ‘Life for 3 killers’. And on an inside page, the paper contrasted the twisted and gruseome behaviour of the accused with the gentle nature of their victims.

Four men had stood accused of the murder of two young men – 17-year-old Mitchell Elgar and 19-year-old Martin Pollitt – and the attempted murder of a third, John Redfern, who narrowly escaped a similar fate.

The ringleader of the gang, 35-year-old Peter Murray, was said to have been friendly with the well-known Kray twins during a time in jail for an earlier offence, although the paper reported that “even the twins were sickened by Peter”, adding;

Murray, who openly bragged about being a right-hand man for the awesome duo, was nothing more than a skivvy. His tasks included “slopping out” their chamber pots in the sluice room at first light, and being their “errand boy”.

The other accused were John Bannister (21), Michael Howe (20) and Michael Bailey (20). Bailey was the only one to plead guilty, but all were sentenced to life imprisonment.

It’s difficult to discover the full story, but it seems Bailey confessed to the police after he and Murray had been arrested for purse snatching; asking them to drop the robbery charge in return for information about the murders.

But  that doesn’t sound very plausible – hardly the best of deals to exchange a minor robbery charge for a double murder conviction – so I think it’s more likely that he knew it would only be a matter of time before the police discovered the facts for themselves and came knocking on his door.

The attacks occurred over three consecutive days, all centred around the toilets at Goytsclough quarry. These were a popular spot for gay men to meet – at a time when homosexual acts were still illegal under the age of 21. It seems the victims were lured there on the promise of work as drivers.

Elgar was the first to be murdered; strangled in a headlock by Bailey after being sexually abused and tortured. On the following day Porritt was lured to the same spot and strangled with a bootlace by Howe and Bannister. Redfern narrowly escaped the same fate the following day, escaping on his motorbike as he felt the gang were plotting something.

The newspaper report also included a touching description of Mitchell Elgar by his mother;

One day he said he wanted to be a writer. But he eventually set his sights on becoming a social worker. He was a sensitive boy. He had chosen to go to Leeds University. But I think he hoped to take up writing again.

The news cuttings contain far more detail than I can (or want to) include here. To read them in full, simply click on either image to view a pdf.

Postscript: There’s quite a few similarities between this case and the murder of William Wood on the road between Disley and Whaley Bridge in 1823, in that some of the accused said they’d been forced to take part by an older accomplice. (Click to view the start of the 10-part series.) 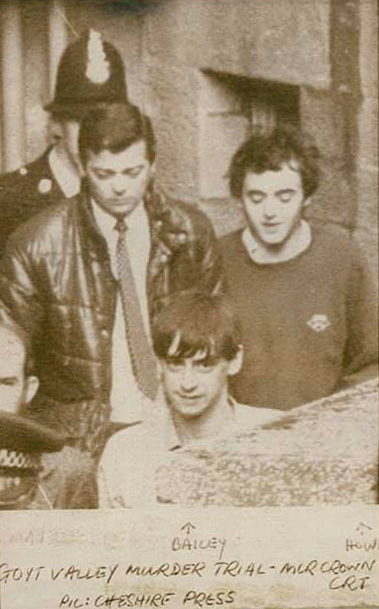 My thanks to Lee for sending this photo of three of the accused leaving Manchester Crown Court; Howe (far right), Bailey (centre) and Murray (partially obscured at far left).

Mike also managed to track down some more detailed information about the murders. Click here to view.

This page gives further details about the case, as well as the ring-leader, Murray, revealing that he died in prison in October 2006.