Above: The nearby Cat & Fiddle pictured under a blanket of snow shows just how severe the weather could get on these moors.

Many thanks to David from the Furness Vale History Society for sending these details about a tragedy that happened in Goytsclough back in February 1860. (Click here to view his post.) The clipping from the Derby Mercury reads:

A man starved to death at Buxton

Last week, Robert Edge, a man in the employ of Messrs. Ellam and Jones, at Goyt’s Clough Works, left his home for the purpose of purchasing provisions; and was last seen returning about nine o’clock in the evening.

The night was very rough and stormy, and he did not reach home. Search was made for him over the moors on Sunday, but without success. On Monday morning, about 11 o’clock’ he was found near Burbage plantation, quite dead from the inclemency of the weather, having wandered some distance from the path to Goyt’s Clough.

We regret to add that he leaves a widow and seven children, quite destitute. Mr. and Mrs. Grimshawe, of Errwood, with their accustomed charity, have headed a subscription with 4l. [pounds], to receive their immediate wants; and on Tuesday, Mr. John Downs, of Goyt’s Bridge, obtained many additions to this sum from the inhabitants of Buxton.

The deceased, Robert Edge, was a native of Reaps Moor, near Longnor. An inquest was held on Tuesday, before Mr. F. G. Bennett, coroner; verdict “Died from the incelemency of the weather.” 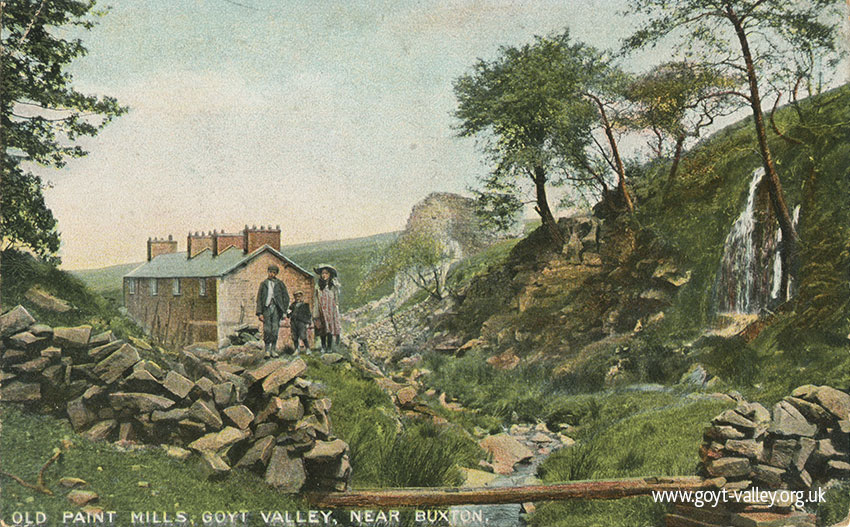 Apart from Goytsclough Farm, the only houses at Goytsclough were a row of cottages next to the Goytsclough Mill. So I’m assuming he must have lived in one of these, along with his wife and seven children. There’s a wonderful photo of three children taken from the rear of the cottages (above). But this would have been taken in the early 1900s, some 50 years after Robert’s death.

Taken from David’s website: Val Stenson and Chris Wilman have researched Robert Edge and found that his death was registered at Chapel-en-le-Frith. Records show a Robert Edge, born in 1822/3 and married to Jane Twigg on 16th January 1844 at Earl Sterndale. Jane was 20 and the daughter of a blacksmith; Robert’s father was a labourer. There is no proof that this is Robert Edge who died in 1860 but given the locations, it does seem likely.

Note: I’m not sure why the newspaper report says he starved to death. From the inquest verdict, it seems he died of exposure.*

I think the map above shows the route Robert probably took (click to enlarge). It’s still a well-marked footpath today, starting from the end of Macclesfield Old Road. Robert lost his way in the bad weather, and ended up in Burbage plantation, where he sadly perished.

*David has cleared up the confusion over the verdict: “Starving” is an ancient term from Scotland, Ireland and Northern England meaning very cold. It was certainly still in use in this area in Victorian times and quite often appeared in local newspapers. I have heard it used occasionally in recent times.”