Above: The illustration was originally commissioned for the cover of a book on the Cromford & High Peak Railway. 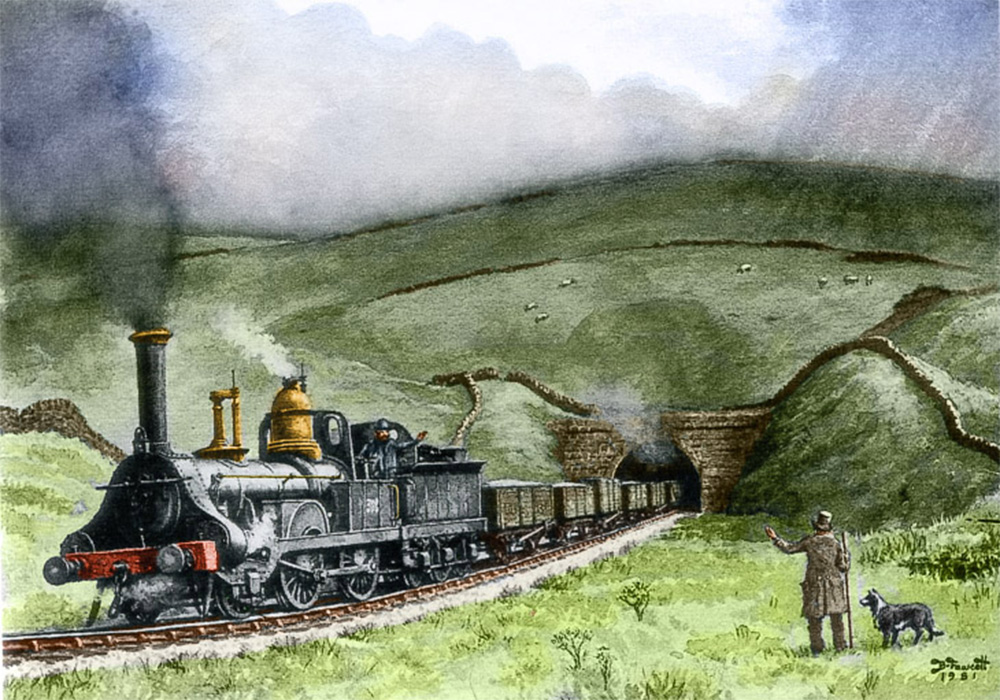 The internet can be blamed for a host of social ills, but it does have its uses. I came across a very poor photocopy of an illustration the other day showing a steam engine exiting Burbage Tunnel on the old Cromford & High Peak Railway.

It was captioned “‘A Crewe Goods 2-4-0 leaving the north end of the tunnel c1880.” This section of the line closed in 1892 and the tunnel has been blocked for many years.

I posted the photocopy on the C&HPR Facebook Group, asking if anyone knew where I might be able to find the original. Martin pointed me towards Bill’s website. It was a black and white image, rather than the colour painting I’d been hoping to find. But it was far better quality than the poor version I’d been given.

It also revealed the artist’s name and the date it was painted: Brian Fawcett in 1981. Mark managed to discover some information about the artist (click to view), showing that he was ‘active’ from 1980-84 – which doesn’t seem a very long time. The webpage also included five other paintings by the artist of railway views commissioned by Durham County Council.

Then Chris got in touch to say that he recognised the illustration from the cover of his favourite book on the C&HPR:

My interest in that lines goes back more than 50 years. In my view John Marshall produced the best book on the C&HPR and that image appeared on the front cover of his 1982 book published by David & Charles. The artist Brian Fawcett died in 1984 and the painting was produced from photos sent to him by John Marshall. It is possible therefore that John Marshall commissioned this painting and was part of his estate when he died.

Which brought me to a bit of a dead end as the painting is probably now displayed on someone’s wall and impossible to track down. But David Easton came to the rescue as he enjoys ‘colourising’ old photos. And hey presto – we now have a version that I’d think must be fairly close to the original.

Above: This map from the early 1900s shows that the line was already marked as ‘dismantled’. Click the ‘Now’ button – or drag the slider – to compare the view with today’s satellite image.

Today, the old track makes an easy walk of a couple of miles from the small reservoir to the tunnel entrance and back. There’s a small car park on the left as you come down the lane from the A5004 Long Hill road. It’s between points 8 and 9 on this walk. 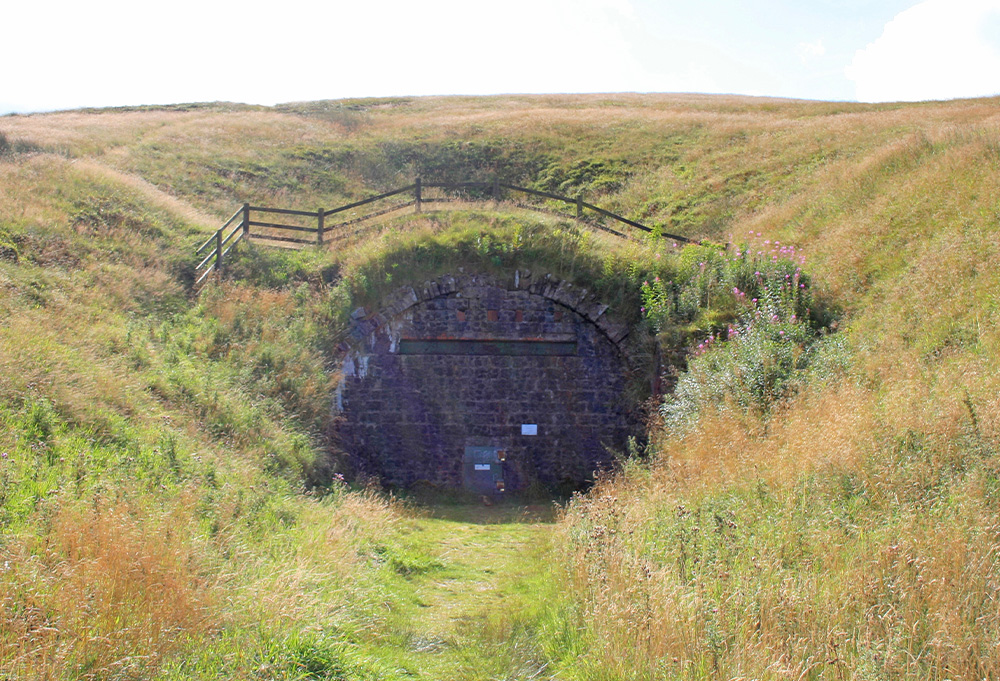 Above: The blocked up tunnel entrance today (click to enlarge).

Above: This photo of the tunnel entrance comes from Bill’s webpage and is dated 1958.

At 580 yards, the tunnel was the longest on the 32 mile line, which opened in 1831 and linked canals at Cromford and Whaley Bridge. It would be wonderful to open up the tunnel – much like those on the Monsal Trail – but a section at the southern end of the tunnel is on private land. (See another of Bill’s pages for old and recent photos of this section.)

There’s lots more information on the C&HPR on this website. Simply click the tag at the bottom of the page to view them all. But this is probably the best introduction to the line.

And for anyone interested in following Joe Brown’s numbers, there’s one fairly close to the entrance. But it’s not easy to find!