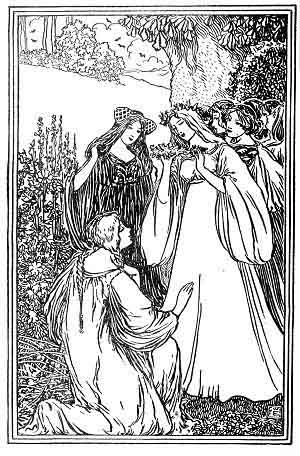 Above: Phillida being made ‘Lady of the May’. The poem was first performed for Elizabeth I in 1591.
Something I read in Strephon’s 1880 report of a visit to Errwood Hall caught my eye. He describes the walk down from the Grimshawe’s hill-top mausoleum;

Down again by the Hall. We will return, if it please you, by a footpath on the right high above the carriage-way. It is a lovers’ walk; a deep-green wooded way made for Phillida and Corydon.

I was intrigued to know who Phillida and Corydon were. But I also wondered where this ‘lovers’ walk’ could be. The first puzzle proved easier than the second to solve. A quick check on Google revealed that they featured in a poem by Nicholas Breton (1545-1626);

Phillida, a young girl was courted by a shepherd, Corydon. They meet in a wood during the month of May, when Corydon expresses his love for her. Phillida refuses saying that men are never true when comes to love. When she kept arguing, Corydon kisses Phillida. But she refuses to respond saying maidens are not supposed to kiss men. At the end, she accepts his love for her.

Persistence obviously paid off for young Corydon! But identifying the ‘lovers’ walk’ wasn’t so easy. There is an attractive path on the right hand side of the lane from the hall to Goyt’s Bridge (see walk 3), but it involves a detour past Shooter’s Clough Cottage. And you wouldn’t pass the hall coming down from the graves along this route.

A close look at an old OS map shows there was a path on the opposite side of the valley which fits the description as ‘high above the carriage way’. But it’s on the left rather than the right.

I attempted to discover the path last weekend, but couldn’t find any traces. The map shows it crossing the stream which feeds into Shooter’s Clough, but there’s quite a drop from the level of the hall (see photo above). And it’s far too steep to climb up and down. So there must have been a bridge at this point.

Although the hall was demolished some 80 years ago, it’s odd that there’s no trace of either a bridge, or the path. And I’ve not seen a bridge mentioned in any contemporary reports. So it’s a bit of a mystery! If anyone can offer any clues, please get in touch. 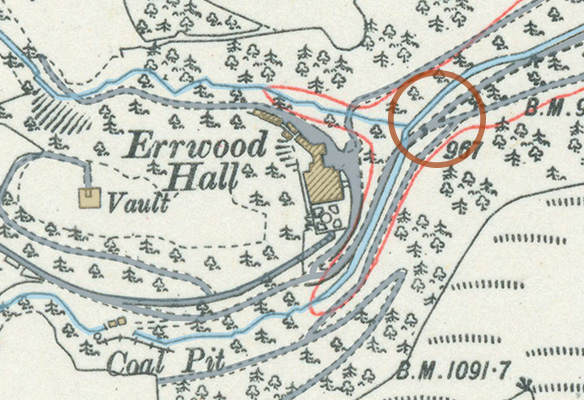 Above: I’ve circled where I think the photo was taken on this 1890s map (click to enlarge). It shows the lane leading down from Errwood Hall to Goyt’s Bridge. 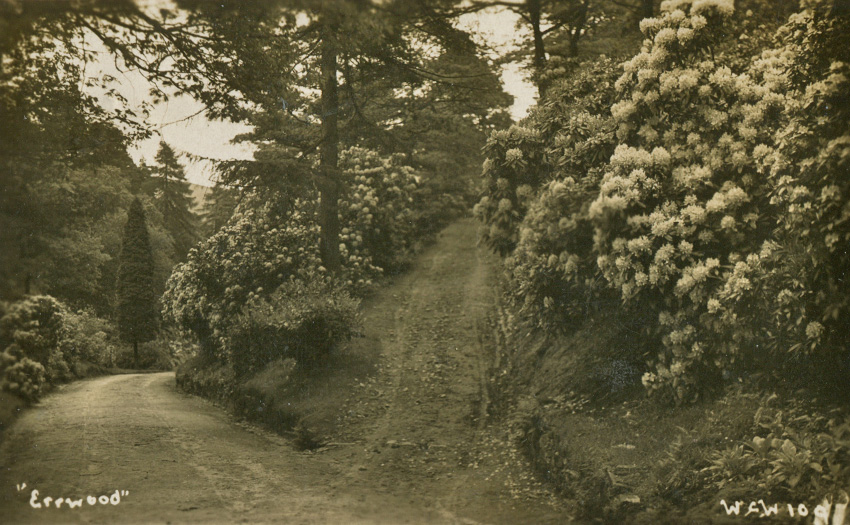 I think I may have found a photo of the ‘Lovers’ Walk’ described by Strephon. He wrote that it was a “footpath on the right high above the carriage-way” (click to enlarge). I came across the image when scanning Michael’s collection of old postcards of the Goyt Valley. But I’ve not been able to find any trace of the path today.