Above: Buxton’s twin stations pictured in the mid ’60s, shortly before the one on the right was demolished.

The Palace Hotel would have been behind and to the left of the photographer (see map).

Today, this view looks down Station Road towards Bridge Street. 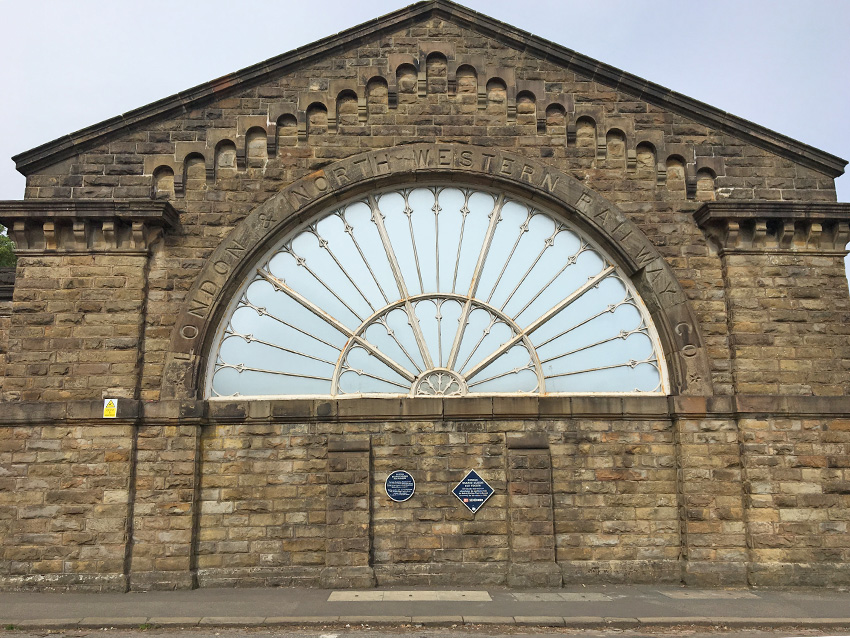 Above: Both stations had matching semi-circular windows. But only the LNWR’s has survived, as the lettering above proudly testifies (click to enlarge).

Buxton’s natural springs have been attracting visitors for centuries. Mary Queen of Scots was probably the most famous, first arriving in 1576. And like Mary, most were hoping that a spa-water treatment would do wonders for their health.

A trip to enjoy the scenic beauty of the Goyt Valley would have been popular. But only for those with enough money and spare time to enjoy such leisurely pursuits. I doubt whether many workers and their families would have ventured that far. And I’m sure they wouldn’t have been welcomed by local gamekeepers and estate workers.

But by the last quarter of the 19th century, the picture had started to change. The railways arrived at Buxton in 1863. And workers were demanding – and getting – holidays to escape their daily grind. It meant that increasing numbers of middle-class, and then working-class families, could explore the picturesque delights of the valley.

The popular Victorian writer, Strephon, waxed lyrical in newspaper articles and books about the natural beauty of the valley. Postcards of the valley were hugely popular, spreading the word even further. Both Goyt’s Bridge farmhouses opened tearooms to cater for the visitors. And they were arriving at both railway stations from far and wide.

I came across a book the other day on the history of Buxton’s railway lines (Ambergate to Buxton by Middleton Press*). It includes this photo of Buxton’s railway stations taken in the 1950s. Drag the slider to see the view today and there’s an obvious difference. One of the buildings has vanished. It made me curious to discover more.

It seems that two major railway lines were competing to link Derby with Manchester, via Buxton, in the 1860s; the Midland Railway (MR) and the London and North Western Railway (LNWR). Buxton’s councillors were concerned that two stations could spoil the town’s character, and engaged the famous architect, Joseph Paxton, to come up with an acceptable solution. 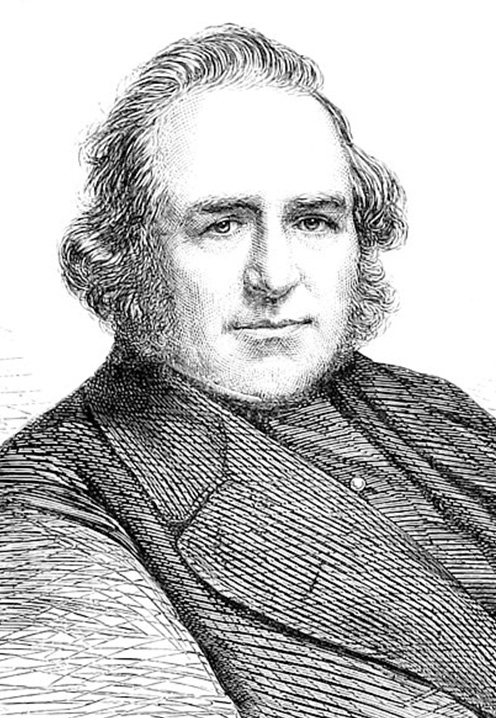 Above: Sir Joseph Paxton (1803-65) rose from a humble gardener to a Member of Parliament, thanks to the patronage of the Duke of Devonshire.

His other great claim to fame is the ‘Cavendish banana’, first cultivated by Paxton at Chatsworth, and now the most popular banana in the world!

Paxton had made a name for himself designing the Duke of Devonshire’s arboretum at Chatsworth. And had gone on to earn fame and fortune creating the Crystal Palace at the Great Exhibition in 1851.

Paxton insisted that the MR and LNWR stations be built next to each other, and in a similar, complimentary style. Both were opened on the same day, on 1st June 1863. (Paxton managed to attend both celebratory lunches!)

Up until the end of the 19th century, the two lines were great rivals, competing for the lucrative London to Manchester passenger traffic. But in 1908 the two companies decided this was too expensive and signed an agreement to co-operate and eliminate waste.

In January 1948, both lines became part of British Railways. By the 1960s the services had reduced to only four in each direction. The 1963 Beeching Report recommended the closure of the MR line.  And the station was demolished some time after 1967.

The LNWR station survived, but lost its roof. A new ring road was built through the site of the old MR station, leaving just a small section of wall and some large iron gate brackets.

Over the following years, there were calls for Buxton’s remaining line to suffer the same fate. But thankfully, it has survived.

Acknowledgements: There’s a wealth of information on the history of Buxton’s train stations on this website.