Above: A photo of Dickie’s skull from Clifford’s book.

I hadn’t heard of the legend of Tunstead Dickie’s skull before reading Clifford Rathbone’s ‘Goyt Valley Story’; a collection of articles he wrote for the Macclesfield Express in 1955. Willow Publishing recently gave me permission to post a pdf of the book on this website (click to view). So I thought it time to share the ghostly tale. Clifford writes:

While I was in Whaley Bridge I heard so much about the skull of Dickie of Tunstead, the skull which refused to be buried and to which legend had attributed the cause of many catastrophies, that I could not resist the temptation to wander a little from the Valley of the Goyt along the road to Chapel-en-le-Frith to the hamlet of Tunstead in the hope of seeing the skull.

For more than a century it had rested in the window of Tunstead Farm, overlooking Coombe Valley, so I was told. It had a reputation of being unable to settle in any grave. Whenever it had been buried in the past, such strange things had happened that the occupiers of the farm were only too pleased to dig it up again.

Dickie’s skull, they told me, was believed to be that of one Ned Dickson, of Tunstead, who left his farm to fight in the French wars. He was reported dead, and a cousin, perhaps a little prematurely, took possession of his property. When Dickie returned very much alive and anxious to have his home back, the cousin and his wife murdered him in his sleep.

His skull took revenge by refusing to lie buried in the earth and in course of time all local calamities were put down to its vengeful influence.

When the Old North Western Railway was taken by the side of Tunstead Farm, a bridge built over it was found to be on quicksand and was thrown down. Again Dickie’s skull took the blame.

However, the considerable walk to Tunstead Farm ended in bitter disappointment, for the then occupants, Mr. and Mrs. Vickers, who had been there for five years, had seen nothing of the skull. 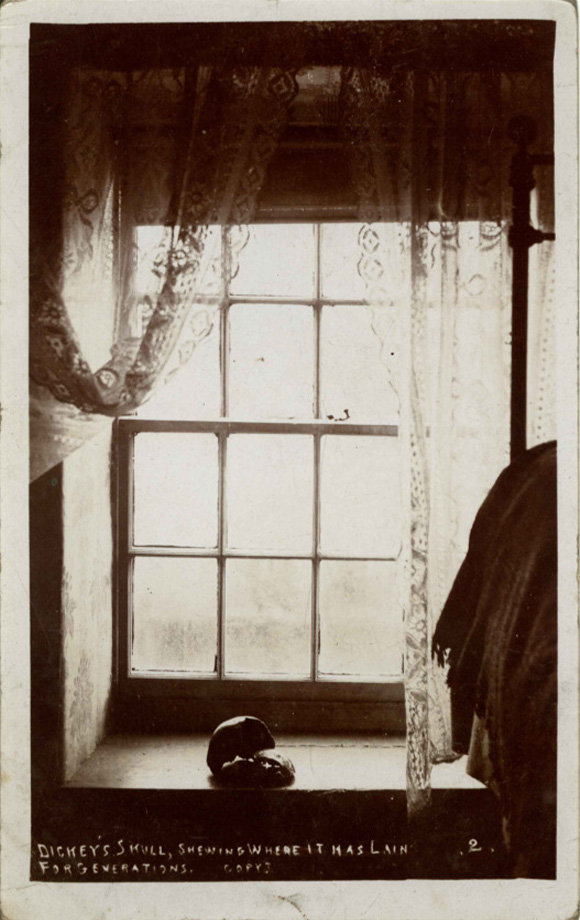 Above: A postcard view of the skull, captioned “Dickey’s skull, shewing where it has lain for generations” (click to enlarge). 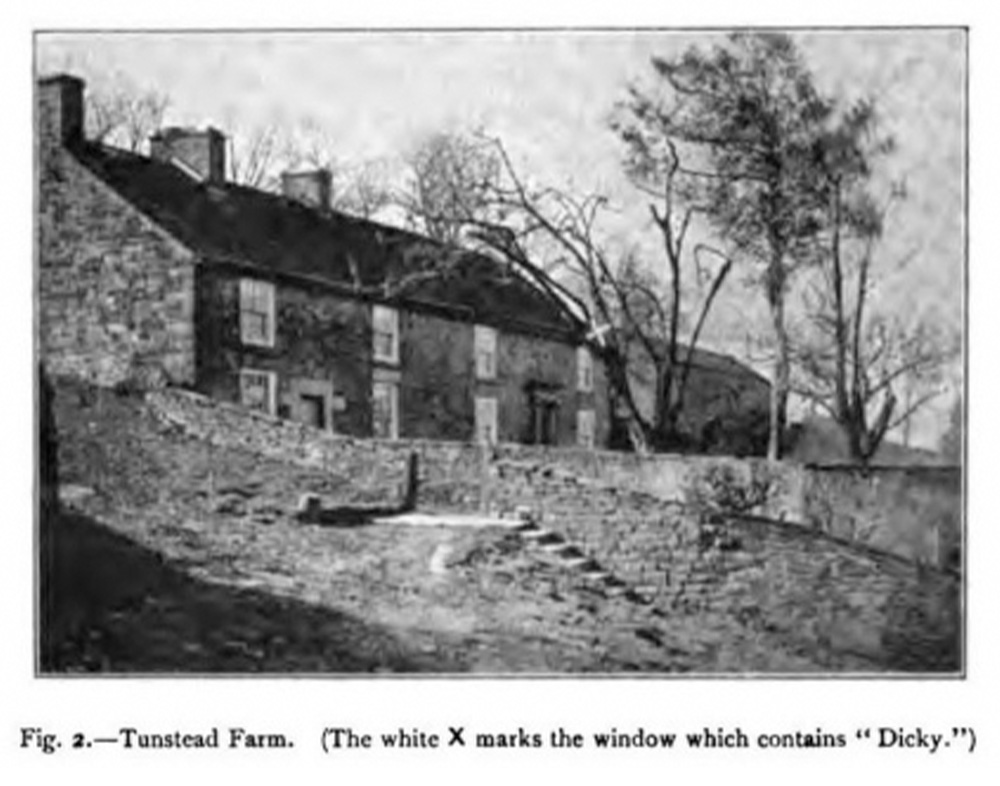 Above: According to this grainy photo, an X marks the window where Dickie’s skull once lay (click to enlarge).

Mystery of the missing skull

“It was not here when we came, and I have no idea where it is,” said Mr. Vickers. This news will surprise Whaley Bridge, for I was assured by them that it was still there. What has happened to the skull apparently is a mystery.

Crighton Porteous, in his book on Derbyshire, which was published in 1950, stated that the skull was at Tunstead Farm. “How old it is,” he wrote, “no-one knows, but when it was examined some years ago by a medical man it was said to show no sign of decay and he thought it was the skull of a girl of about 18 years. One theory is that it may have been taken in the forgotten past from a tumulus on the hillside above.”

He goes on to tell the story of the days when farmers rode on horseback to take their produce to market. “The tenant of Tunstead Farm was riding back from market with his wife up behind him. She was tired after a long day, but it was her duty at every gate to get down, hold it open, and fasten it again when her husband had ridden through.

“I wish Dickie would open ’em,” said the weary woman getting ready to drop off again. As she did so, the gate obligingly opened. “The woman could almost have bitten her tongue out for having spoken. After that, every gate to the farm opened in the same way, but the good woman instead of being grateful reached home nearly in a collapse.”

No doubt, many of the stories which have been attributed to Dickie’s skull are the product of the vivid imagination of the hill country farmers, and have been passed down from one generation to another. The official guide, issued by the Whaley Bridge Urban District Council also includes reference to the skull. It states:

“Not far away, in the little cluster of houses known as Tunstead Milton, the skull of Dickie o’ Tunstead, reposes on a copy of the Bible, surrounded by the superstitious aura of more than a century.”

The skull has now gone, but where?

If anyone can answer Clifford’s intriguing question, please get in touch, or leave a comment below.