Above: Just a few of the wonderful postcards from Corrie’s collection on the Cat & Fiddle Inn. Click here to view them all. 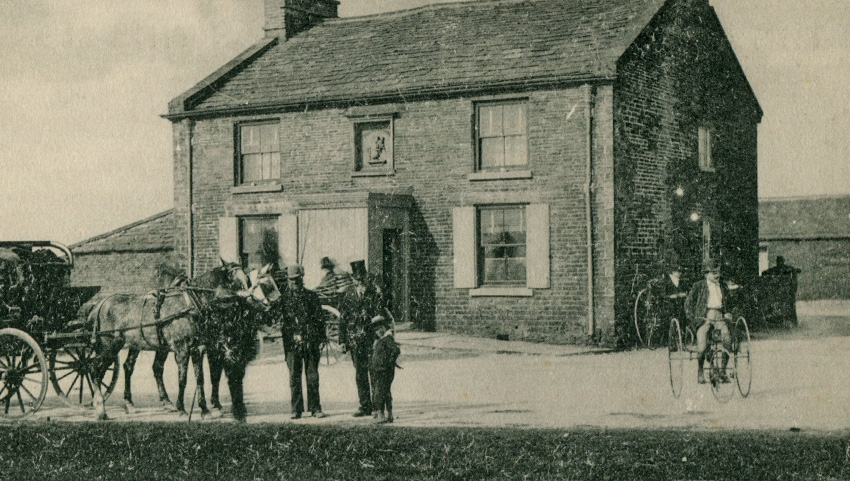 Above: These old postcards are photographs rather than prints, so haven’t been reduced to a series of dots.

This means they retain a lot of fascinating detail. This postcard (click to enlarge) shows a gentleman on a tricycle.

It must have taken some effort to cycle on one of these up to the pub. They were made of sterner stuff in those days!

Set on remote moorland close to the Cheshire Derbyshire border, the Cat & Fiddle Inn is one of England’s most famous pubs, often featuring on national news when it’s cut off during severe snow storms.

It was long considered England’s highest pub at an altitude of 1690 feet. Until someone discovered that the Tan Hill Inn in Cumbria was slightly higher at 1732 feet!

I’ve just posted a collection of old postcards showing the pub from the early 1900s. They contain some fascinating detail. Click here to view them. I’ve also posted a page with census records listing some of the families who once lived here. Click to view.

The Cat & Fiddle lies close the the source of the River Goyt, and was on the edge of the Errwood Estate purchased by Samuel Grimshawe in 1832.

But he immediately faced a challenge by the Earl of Derby who insisted the pub was on his land. Gerald Hancock, in his Goyt Valley Romance, explains what happened next;

His Lordship owned extensive lands in the adjoining Macclesfield Forest, and alleged that the Cat and Fiddle was on that side of the boundary, therefore on his land. Grimshawe would have none of it.

He brought the old men of Taxal together before a Master Extraordinary in Chancery, and one Daniel Downes swore before the Master that he knew all about the boundaries.

He was shown the boundaries as a young lad by a previous owner of the Taxal Moors who had told him “I’ll show thee where the boundary goes, it may be of use to thee some time. Thou art a young lad.”

Dan’s recollections were too much for his Lordship of Derby and the Cat and Fiddle remained with the Grimshawes. 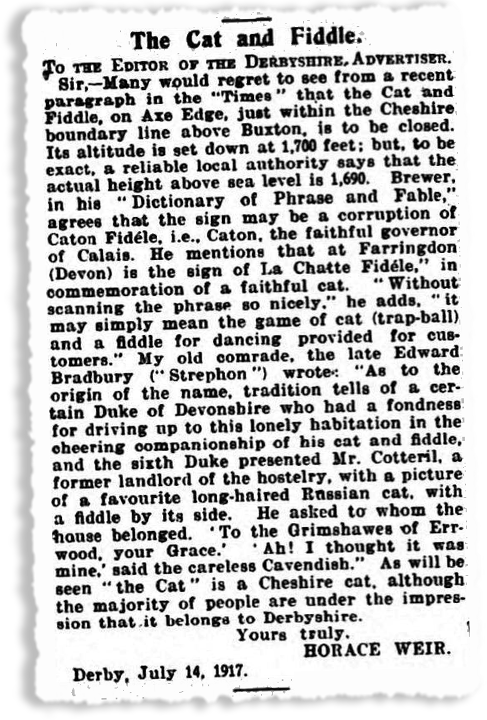 Mike has just sent me this clipping from The Derbyshire Advertiser dated July 1917 expressing regret that the Cat & Fiddle was about to close (click to enlarge).

I always assumed the name came from old ‘Hey diddle diddle’ rhyme, which Wikipedia says dates back to at least the 16th century. But the writer says that Strephon (many of whose articles are reproduced here), had a different explanation:

…tradition tells of a certain Duke of Devonshire who had a fondness for driving up to this lonely habitation in the cheering companionship of his cat and fiddle, and the sixth Duke presented Mr Cotteril, a former landlord of the hostelry, with a picture of a favourite long-haired Russian cat, with a fiddle by its side.

He asked to whom the house belonged. “To the Grimshawes of Errwood, your Grace.” Ah, I thought it was mine said the careless Cavendish.” As will be seen ‘the cat’ is a Cheshire cat, although the majority of people are under the impression that it belongs to Derbyshire.”

It sounds to me like Strephon had his tongue firmly in his cheek with that obtuse explanation! The Cheshire cat was the invention of Lewis Caroll in his ‘Adventures in Wonderland’, first published in 1865. And the pub was on the border between Cheshire and Derbyshire. So make of it what you will. But if anyone has a better idea on how the pub got its name, please leave a comment below.

It’s amazing what gems can be mined from the depths of the internet, if you know where to look. And Mike certainly seems to have the knack. Here’s another clipping he’s found concerning the Duke of Devonshire and the Cat & Fiddle. This one was written by Strephon and published in the December 31st 1887 edition of The Weekly Telegraph.

My High Park neurologist sends word that Thomas Cotrill, of Goyt’s Moss, near Buxton, died on the 8th inst., aged seventy-six, and was gathered to his fathers on the 14th, at St. Peters, Fairfield, of which place he was a native.

Thomas Cotrill was formerly the landlord at the Cat and Fiddle, between Buxton and Macclessfield, where he was long and favourably known to all sorts and conditions of men, for he was always courteous and kind to all his customers, from the peer to the peasant.

Thirty years ago the late Duke of Devonshire was an annual visitor, to Buxton, where the personal interest he took in the place contributed much to the successful seasons in the “fifities” of the present century.

To the Cat and Fiddle was a favourable drive, for his Grace enjoyed the scenery and his long church warden clay pipe at the same time. One boisterous day he wanted a light for his pipe at the Cat, and Thomas Cotrill made several unsuccessful attempts to convey one to him, but without avail, and matches in that high wind were also of no use.

The Duke would not leave the carriage. Then a bright idea struck the genial landlord, and he rushed to the “shippous” at the back of the house, and seized the shippous lantern, lighted its candle, and carried it, covered with grease and sundry shippon compliments to the carriage, when the Duke, laughing heartly, at last succeeded in lighting his pipe.

“Thank you, my good man, that does very nicely!” said the Duke, and drove away. 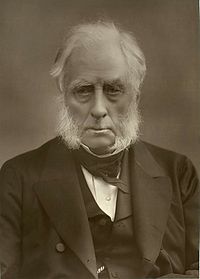 It was the fifth Duke of Devonshire, William Cavendish, who developed the spa town of Buxton in the 1770s.

Using his vast fortune, much of it made from copper mines, he hoped to make it a northern rival to Bath.

The duke Strephron mentions as visiting the Cat & Fiddle 30 years earlier, around 1857, would probably have been the seventh (above).