Above: I found this photo of Rev. Evans, alongside a young boy captioned as Lomas, on the Whaley Bridge History website.

It’s clear from the previous post that the ‘remarkable rector’ of Taxal Church, Rev. Samuel Evans, was not a man to back down in a quarrel. And so it proved during his 35-year tenure. Much of the information here is taken from David Easton’s website. And it makes fascinating reading.

The previous rector had died in 1886. The living, including the substantial rectory and grounds, was worth £300 per year. And had already been purchased by Evans, who came from a wealthy Northern Irish family.

He lost little time in appointing himself as the new rector. And soon raised £850 to carry out much-needed improvements to the church. These included re-roofing the chancel, rebuilding the east window, as well as installing new pews and a pulpit.

But Sam’s brusque style was soon causing dissent among his parishioners. In April 1888 the annual vestry meeting descended into bitter acrimony as Evans accused one of the church wardens, John Nall, of misappropriating church money, saying he was a coward…

Amidst great uproar, Mr Nall said that “the Rector would see whether he was a coward or not before he had done with him”. The Rector’s reply was that he would “take Mr. Nall by the neck and remove him”.

Above the uproar, Mr.Nall shouted “Where should I be while you were doing that?”. The meeting was terminated and the warden proposed that to avoid unseemly scenes, future meetings should be held in Whaley Bridge.

Just one month later the two men fell out again. This time over Evan’s refusal to accept Nall’s claim that he had purchased land in the churchyard to build a family vault. Over 300 parishioners had written in support of Nall.

A local JP, Lieut. Col. Hall, spoke for them all when he said “…he was sure that they all regretted that Mr.Evans had seen fit to take the course he had, for it touched a man’s tenderest parts when it affected the resting place of his dead”.

But their protests fell on deaf ears, and the church authorities stated:

The rector was within his rights in doing what he had done, although it rarely happened, and was seen as being very uncharitable. A motion in favour of Mr. Nall was carried unanimously. 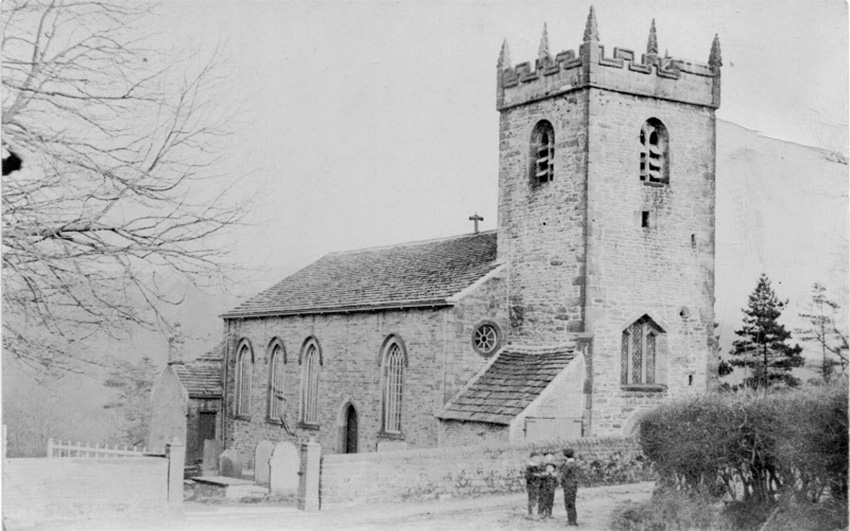 Above: Taxal Church looked a wonderfully peaceful spot at the time Evans was rector. But appearances can be deceptive!

In April the following year, the dispute between Evans and the wardens over church finances exploded, as this contemporary report describes:

Extraordinary scenes in a Derbyshire Church

One of the most exciting scenes ever witnessed in any place of worship in The Peak occurred on Sunday afternoon during divine service in St James’s Church, Taxal, Whaley Bridge.

The Rector, the Rev S. Evans, purchased the living about three years ago and there have been frequent disputes between the Rector and the Wardens.

The Easter vestry meeting was held on Saturday afternoon and the proceedings were quite lively. Lieutenant-Colonel Hall, the parishoners’ warden, objected to the passing of the minutes, on account of their not being correct…

The Rector declined either to correct the minutes or to allow any other accounts to be read and the meeting broke up in great confusion, nearly all the parishoners leaving the church so that nothing could be done.

On Saturday night Colonel Hall caused a notice to be affixed to the church door calling another vestry meeting for Saturday next. At the service on Sunday afternoon, after the prayers had been read, the rector walked down the church, took down the notice from the door and walking up to Colonel Hall’s pew placed the notice in front of the Colonel.

Colonel Hall retorted that he did not want the notice, and leaving his pew, walked down the church with the intention of again affixing the notice to the door. He was followed by the rector and when he reached the church porch, a most exciting scene was witnessed.

There was a scuffle in the porch and it is alleged that the vicar gave Colonel Hall a violent blow over the side of the head with his fist. The church was by this time a perfect babel, all the congregation getting up and leaving the sacred edifice, no sermon having been preached. For some time there was a most extraordinary scene.

Sure enough, the case ended up in Stockport Magistrates Court where Taxal’s ‘remarkable rector’ pleaded not guilty to assaulting JP Edward Hall.  Click here to read the next episode!