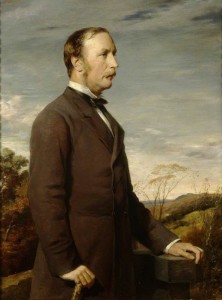 Above: This 1932 cine film shows the inauguration ceremony at Fernilee Reservoir. Click the expand button to view in full screen. 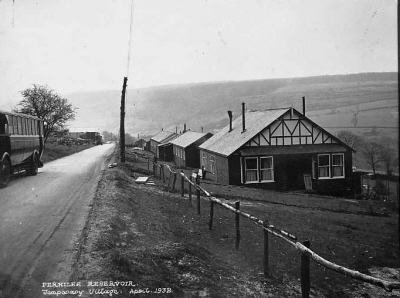 ‘Tin Town’; the navvies’ temporary accommodation beside the road leading down to the construction site. (Click to enlarge.)

The flooding of The Goyt Valley

This article tells the history of the construction of the twin reservoirs; Fernillee and Errwood.  It was first published on the website of the Whaley Bridge Local History Society and is reproduced here by kind permission of the author, Norman Brierley,

In 1825 an Act was put before Parliament to provide water to the fast-growing town of Stockport. Before then, the town’s water supply was obtained from various springs and wells. The Act was entitled: “An Act for better supplying with water the Town and Township of Stockport, the Township of Brinnington and several other Townships adjoining thereto, in the Counties Palatine of Chester and Lancaster”.

This company was headed by Mr. William John Legh (left) of Lyme Hall and was granted the Act of Parliament to supply water to Stockport. Under this Act, Horse Coppice Reservoir was constructed in Lyme Park, and one bed of sand Filters at High Lane. In 1863 the Companies were amalgamated and known as Stockport District Waterworks Company.

In 1872 a second reservoir was constructed at Lyme Park: Bollinhurst Reservoir. It was soon found that the available sources were inadequate to cope with increasing consumption and that extensions were necessary.

The Water Corporation obtained, via Parliament, powers to construct reservoirs in the Kinder, Sett and Hollingworth Clough Valleys. The dam across the River Kinder was designed by James Mansergh & Sons. Tenders were invited and the contract was awarded to Abram Kellet.

The contract was to commence on May 22nd 1903 and to be completed in 7 years. There were lots of problems with foundation works, and in 1907 the masonry dam was abandoned in favour of an earthwork embankment type. G H Hill & Sons were appointed Engineers and Basil Mackenzie (keep an eye on that name) was to carry out the works.

As the completion date was fast approaching, work had to carry on 24 hours a day. And instead of filter beds, a mechanical filtration plant was built. The reservoir first overflowed on January, 16th 1912 but was officially opened on July 11th, 1912.

But yet again, it quickly became obvious that these water supplies from the reservoirs were good – but not adequate. So now it was time to find further reserves, and the Water Board looked to the valley above Whaley Bridge.

The Dale of Goyt proved to be too much of a chance to miss for the Water Board. It was just perfect. It had an enormous catchment area and was fairly remote. 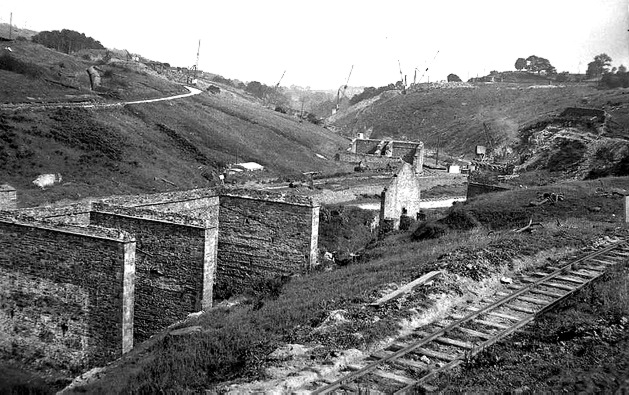 The Chilworth Powder Mill in the valley had already closed (photo above shows some of the factory buildings before they were completely demolished). And farms and houses could be bought cheaply enough. There was just a small village nearby – Fernilee – so called after ‘ferny-lea’, an open pasture land abounding with scented ferns. So plans were put in place to construct a dam across the valley.

First – as in all major contracts – there were preliminary works and site set-ups to consider before work commenced. At the same time as Fernilee Reservoir was in the planning stages, there were also plans to construct Errwood Reservoir. A lot of people think that Errwood was thought about years later, but this is not the case. Errwood was always going to happen, and was on the drawing board with Fernilee (see original plans below). 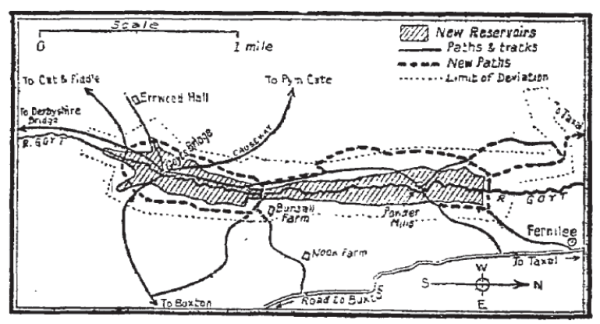 The valley was too long and extensive to have just one dam. But Errwood was constructed some 30 years after Fernilee. Above is a drawing from 1930 showing both reservoirs, plus the footpath that will go over the suspension bridge that existed before Errwood reservoir was constructed. (Click the map to enlarge.)

We really have no idea how they managed to plan, programme, cost and construct Fernilee – as well as all the associated works – back in the 1930s. It would be a test even today, with modern equipment, computers, laser levels, etc. And although there was a shortage of local labour, the company had access to a labour force of navvies who would live on the job.

So the first job would have been the site set up which would consist of housing for these men. We don’t know how many were employed at Fernilee – probably hundreds – and so a temporary village was built for them to live in. This was constructed on the road down to the dam, and these temporary villages were known as ‘Tin Towns’ because of the corrugated iron used in the building of the huts. 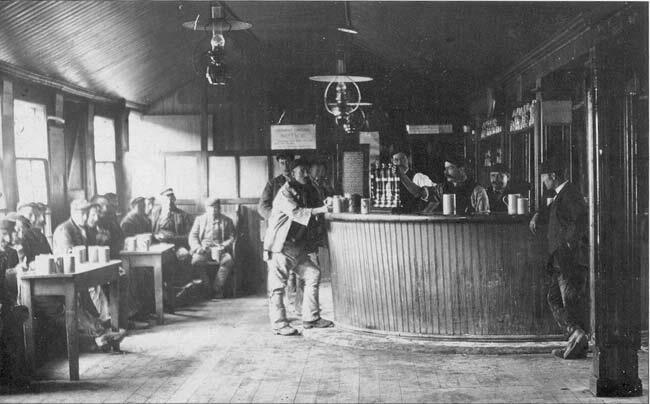 The navvies were not popular wherever they set up camp as locals perceived them as heavy drinking, foul mouthed and uncouth womanisers! So they were almost confined to barracks for the duration of each job. At some of the larger projects in the country, housing comprised of dormitories for the single men, and smaller huts for married men with families. Some had hospitals, a school, Post Office, greengrocers, cobblers, tobacconist, bath house – and even a small police station.

These were for schemes when the workforce numbered into the thousands. Fernilee was a much smaller job but one thing it probably did have was a canteen with an alcohol licence. They all had one of those for it kept the men on site and they were not roaming around the local pubs. Licences were granted by the local authority for the duration of the job.

The work was hard and conditions were sometimes harsh, health and safety was almost non existent. Pay would have been a few pounds a week and hours were long.

As shown in the Footpath Preservation Society’s report for 1929 there was concern about the loss of the footpaths that crossed the River Goyt and the Goyt Valley itself. The water Board had to address this problem and so Contract No 7 was awarded to Joseph Parks and Son of Northwich to design and construct a footbridge across the valley that could be used when the valley was flooded.

The bridge was constructed before the reservoir was flooded as it would have been a much easier task. Even so when it was put in place it was high above the bottom of the valley. It was called ‘The Footbridge at Head of Reservoir’ and was of the ‘Stiffened Suspension Type’. The walkway was ‘Grill Flooring’ and it spanned 140 feet and was 4ft 6 inches wide. It was beautiful.

So work began the work to build Fernilee reservoir. There is a dedicated album on our sister site www.whaleybridgephotos.co.uk where there are many photographs of the construction of the reservoir so they are not going to be repeated here.

The hamlet of Goyt’s Bridge and Errwood Hall were destroyed in the 1930s, the reason for the demolition was given by the Stockport Water Board that they were afraid of pollution into the Fernilee Reservoir.

The water from the reservoir was now filtered using a Water Treatment Works rather than filter beds and Lehane, Mackenzie and Shand constructed the one at Fernilee. This is now sadly derelict. This building was opened by Alderman George Padmore who also fired the first shot when the construction began years earlier. 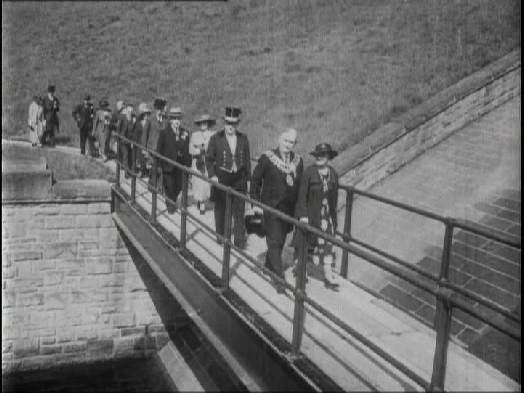 Above is a photo of George taking a stroll across the access bridge which used to cross the stone overflow. (This bridge is also long gone). Later George was presented with the key to the filter house door and once inside he was watched by a huge audience as he turned the cast iron filter vessels to release the water. This was greeted with much applause.

After George Padmore had inspected the reservoir, the cottages and the outside of the Treatment Works he was officially given the key to the Filter House. He led the invited guests inside and after many speeches he was given the honour of turning on the water. He’s pictured below sat in front of the great vessels listening to the speeches before the switch on. 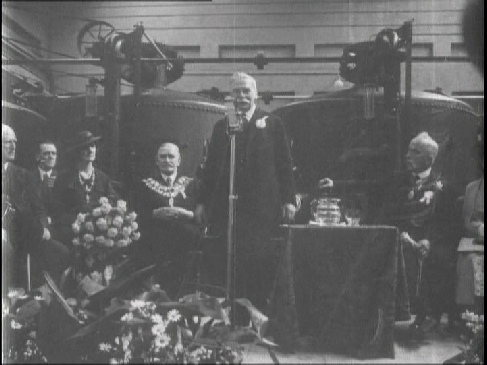 In the 1960s the second reservoir was constructed; Errwood. Since the Errwood dam now bridged Fernilee reservoir, the suspension bridge was no longer required so it was dismantled. Here are some photographs of Errwood reservoir filling up… 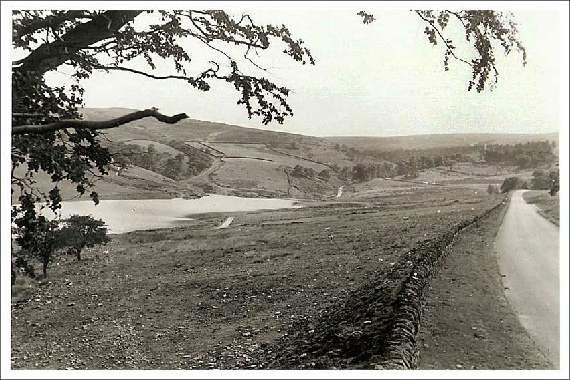 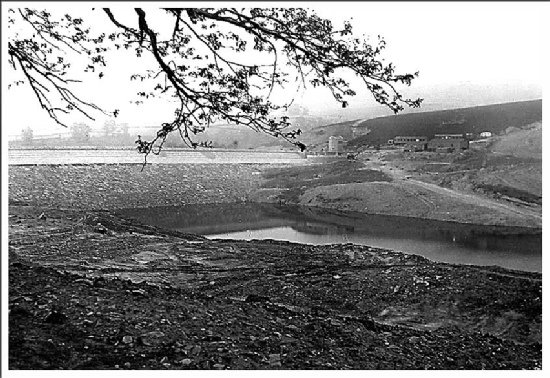 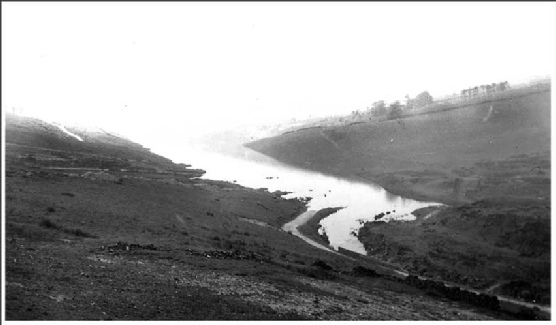 Above: The northern part of the Goyt Valley before it was submerged under Fernilee Reservoir. The track on the right is the line of the High Peak Railway as it snakes towards Whaley Bridge in the distance. It’s now a much-enjoyed footpath running alongside the reservoir bank.