Fatal accident on the C&HPR

Above: Although William Chappell seems to have taken much of the blame for the fatal accident, he went on to work from Buxton Station and is pictured above on the footplate of a coal engine some years after the collision. 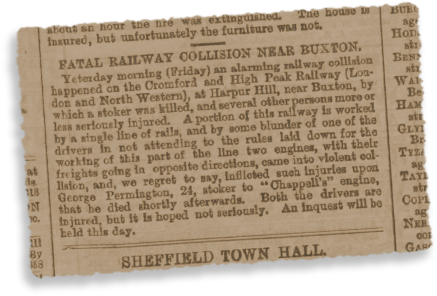 Above: The Sheffield Daily Telegraph’s 18th December 1875 report of the accident (click to enlarge) blames it on “some blunder of one of the drivers in not attending to the rules laid down.”
Something Strephon mentioned in his account of a journey through the Goyt Valley on the Cromford & High Peak Railway in 1880 caught my eye;

…the High Peak Railway is purely used for goods and mineral traffic, and passengers are not conveyed by it, although some years ago the guard was allowed to take a few people between local stations, but an accident occurred which closed the privilege.

Opened in 1831, this 33 mile line must have been a godsend to many local people, connecting both canals and main-line train routes at Cromford and Whaley Bridge. And although Gerald Hancock in his ‘Goyt Valley Romance’ reports that the journey-time could take up to five hours, this must have been a lot faster and less arduous than travelling by horse or carriage, particularly over such windswept and forbidding terrain.

Gerald writes; “The railway was constructed to carry industrial goods such as limestone, coal and many other things. Passengers were carried on a limited basis, though the journey time of five hours was not unusual. A Buxton directory of the 1850s gave a timetable from Ladmonlow as one passenger train to Cromford daily at 2.30pm, and to Whaley at 11.30am.”

Gerald went on to say; “Sadly there were the inevitable accidents on the railway, with farm animals being sometimes killed, although farmers, when they applied, were compensated by the railway company.”

But the accident that caused the line to stop carrying passengers was far more serious than a few sheep coming to grief under the wheels. I found the details in N Jones and J Bentleys’ ‘Railways of the High Peak; Whaley Bridge to Friden’.

The authors explain that when the line was first opened, wagons were pulled along level sections of track by horses; “One horse could draw a load of ten tons on rails as opposed to one ton on a good road.

“It appears that during this period, passengers stayed on the coach during its traverse of the inclines, a practice which would appal today’s Health & Safety Executive officials, but which the travellers probably preferred to the arduous and equally dangerous alternative of walking up and down the inclines.”

I’m not sure of the exact date, but steam engines seem to have replaced horses by 1856. Jones & Bentley go on to say; “From 1856 to 1877 passengers were conveyed by one daily goods train throughout the length of the line. A guard’s van, including a passenger compartment known as the ‘fly’, was run for them.”

The accident occurred in December 1875. Jones & Bentley quote from a Board of Trade Enquiry held the following year entitled ‘Dangerous operating practices on the C&HPR as recorded in this account of a head-on collision between Ladmanlow and Harper Hill.’ The report states;

“The fireman of one of the engines (George Tumington) was unfortunately killed, the driver (William Chappell) had his thigh fractured, and the driver and fireman of the other engine are returned as ‘slightly shaken’ whilst the two engines were a good deal damaged, and eight wagons to a lesser extent.”

Most of the 33 mile line was single track. A ‘staff system’ was used to avoid collisions between trains coming from opposite directions. The staff was a wooden truncheon inscribed and painted with the C&HPR’s name and company colours. There was only one in use at any one time. And trains were not supposed to move along the line unless they carried it.

But for some reason William Chappell had set off without the staff. He was also said to have been going faster than the recommended speed, and had not used his whistle. The Board of Enquiry blamed Chappell for the accident, but criticised the company for its lack of safety control.

In their recommendations, the Board stated; ‘…no portion of the railway shall be deemed to have opened for the public conveyance of passengers.’  Which meant it was back to horse power for locals travelling between Cromford and Whaley Bridge, and through the Goyt Valley. 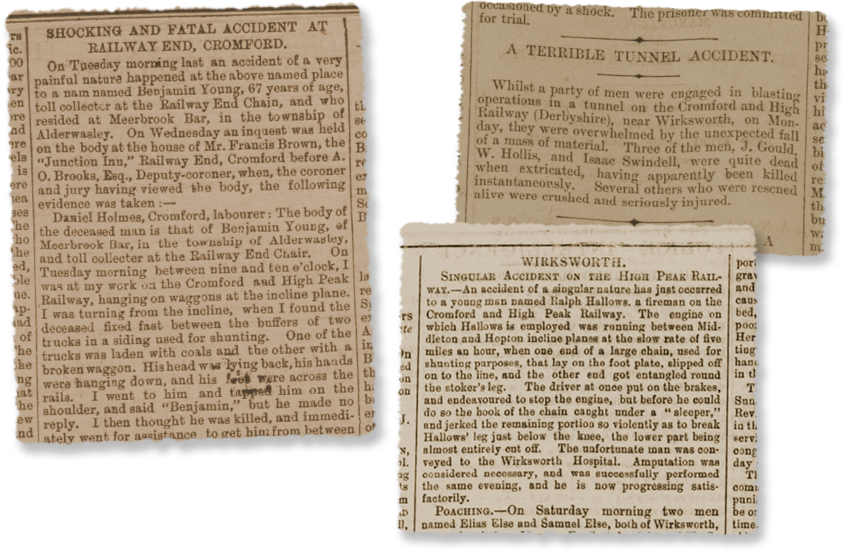 Danger on the line

Press reports from the 1870s and ’80s show just how dangerous working on the C&HPR could be. These three clippings (click to enlarge) tell of a labourer squashed between the buffers (1873), a fireman who had to have his leg amputated when a chain became wrapped around it (1878), and three workers killed in a tunnel explosion (1880).