Above: The arch is clearly visible on the right of this photo. 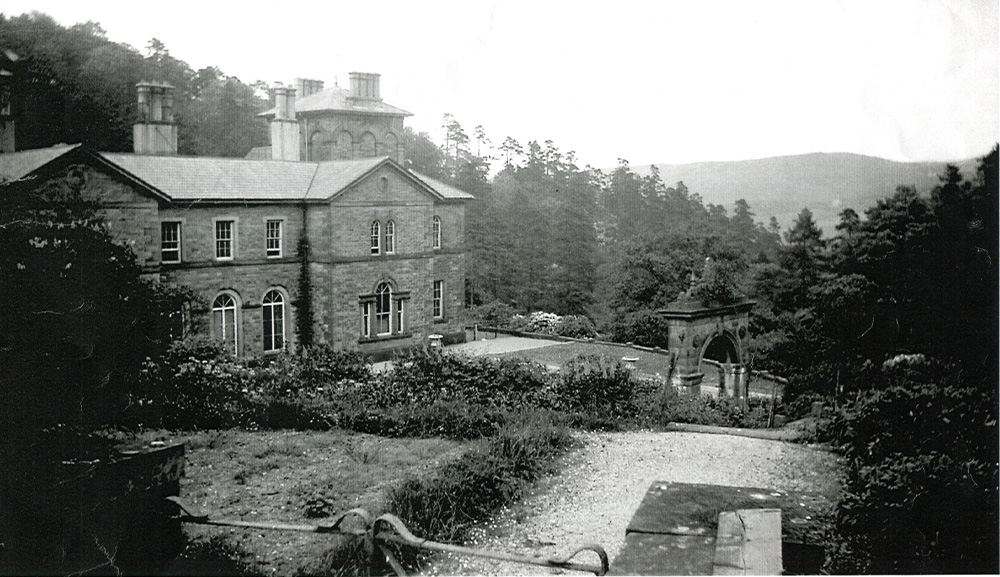 Above: The full photo (click to enlarge). It’s a pity it’s such a poor-quality photocopy. I’d love to be able to track down the original.

I recently came across a photo of Errwood Hall that I hadn’t seen before. It’s a photocopy and fairly poor quality. But it’s interesting as it includes the grand arch leading up to the Grimshawe’s hill-top cemetery.

The arch would have been demolished along with the Hall soon after Stockport Corporation purchased the estate to build the twin reservoirs following the death of Mary, the last of the Grimshawes, in 1930. But the steps still remain.

This ‘then & now’ fade shows how the arch once looked, topped with a ‘G’ for Grimshawe. Use the slider – or click the Now button – to see the same view today. 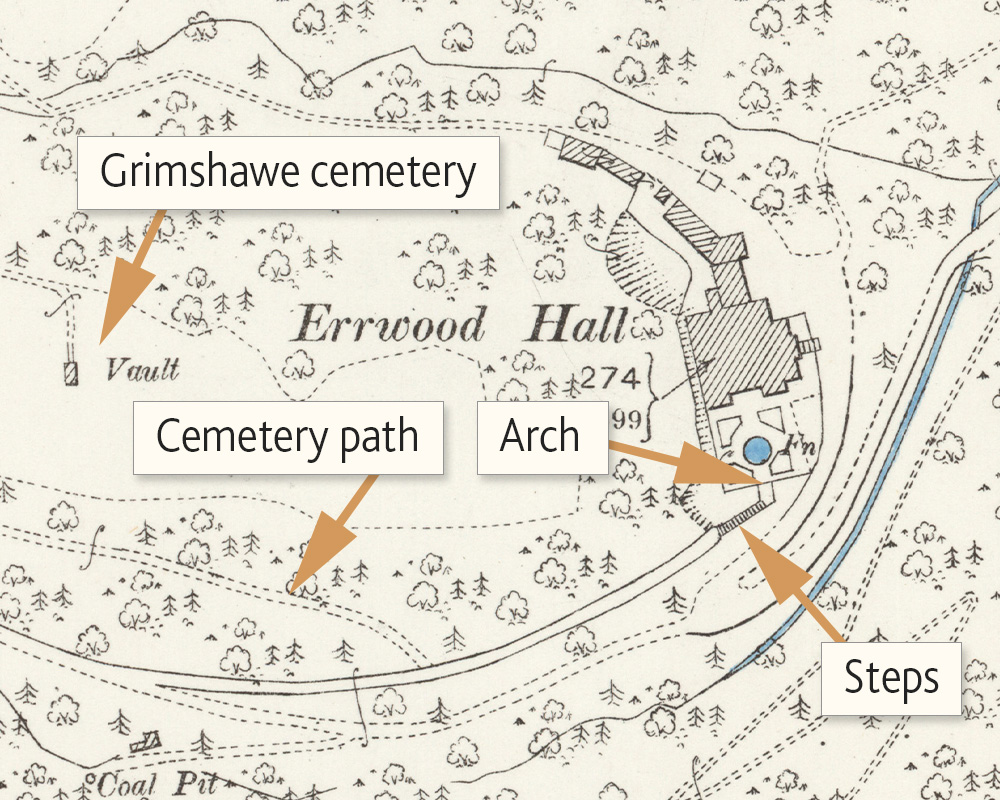 This map from the early 1900s (click to enlarge) shows the position of the arch and steps, at the end of the south-facing ornamental gardens. A path from here led gradually up the slope to the family’s hill top cemetery, which is still there today. 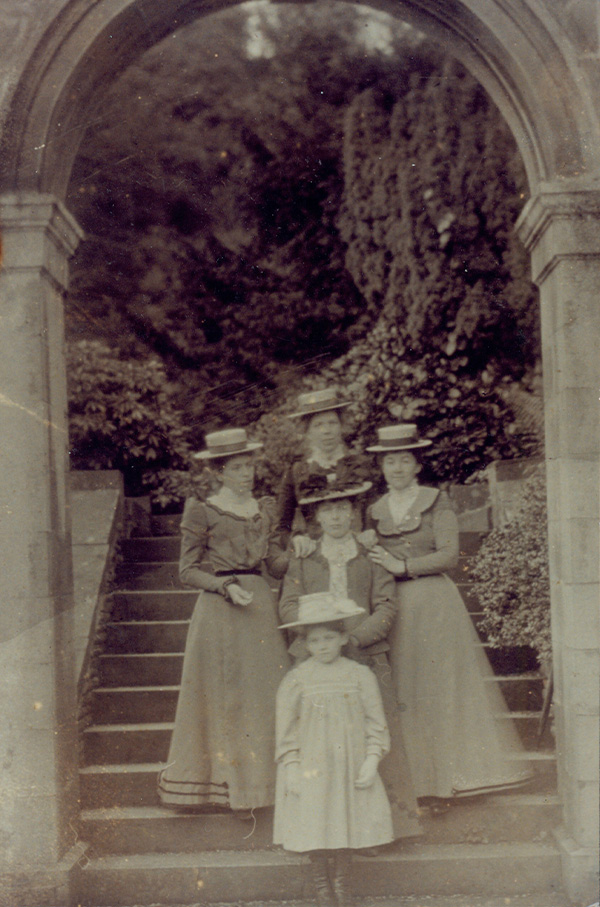 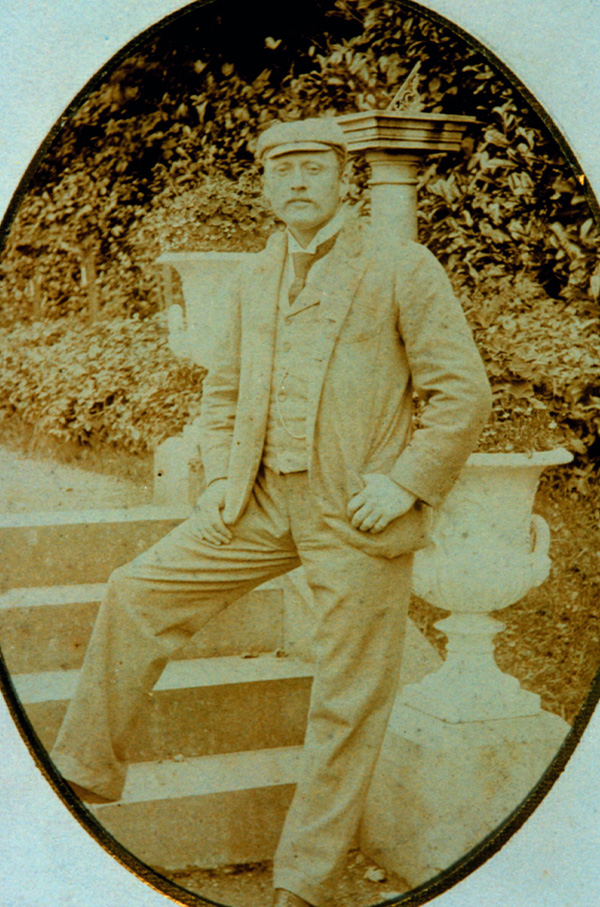 The four ladies on the left, pictured on the steps behind the arch, are sisters and also nieces of Captain Edward Francis Preston (right), who married Genevieve Grimshawe (the younger of the two Grimshawe sisters) in 1891.

I’m not sure which is which, but in order of age, they are Antoinette, Esme, Hermoine and Irene. And I think the child would have been one of their cousins.

Genevieve and Edward  informally adopted Esme after her mother died, and she spent much of her early life at Errwood Hall.

Captain Preston died in 1901 while on a visit to France. Gerald Hancock in his Goyt Valley Romance describes how his coffin was taken through the arch up to the graveyard:

It was a great shock and sadness that Captain Preston died on the 1st March 1901 at the early age of fifty six. He died while on a visit to Menton, near Monte Carlo, France. He was extremely well liked by all who knew him.

His body was brought home to Errwood, and his coffin borne by members of the family and farming tenants, to the private burial ground behind the Hall. There were many Catholic clergymen in attendance and the service was conducted by the Bishop of Shrewsbury.

Genevieve remained a widow for another 28 years, dying in 1929. Her older sister, Mary, died the following year. The coffins of both sisters were taken through the arch to be interred in the family’s vault. Gerald writes:

Anne Genevieve Marie Preston died on the 28th of January 1929 at Banclol Sur Mer Var. Her remains were brought home to her beloved Errwood to be buried alongside her devoted husband, the Hon Captain Edward Preston, who was laid to rest some twenty eight years before that on that windy outpost of the cemetery on the hilltop.

Many of the Preston family travelled to Errwood to pay their last respects, along with many friends and Catholic priests in attendance. The service was conducted by the Bishop of Shrewsbury. Mary Gosselin-Grimshawe, without her devoted sister Genevieve, was now the last surviving member of Samuel Grimshawe’s family, alone with Esme and Antoinette Maud, who had returned to comfort her aunt.

Mary Ambrose Louisa Gosselin-Grimshawe (her full name), died the following year on the 23rd February 1930, and with her death went the glories of Errwood Hall.