Above: Powder mill firefighters with their small water pump. Explosions were relatively common at the mill. It could be a very dangerous place to work. Particularly when fighting fire in a gunpowder mill! 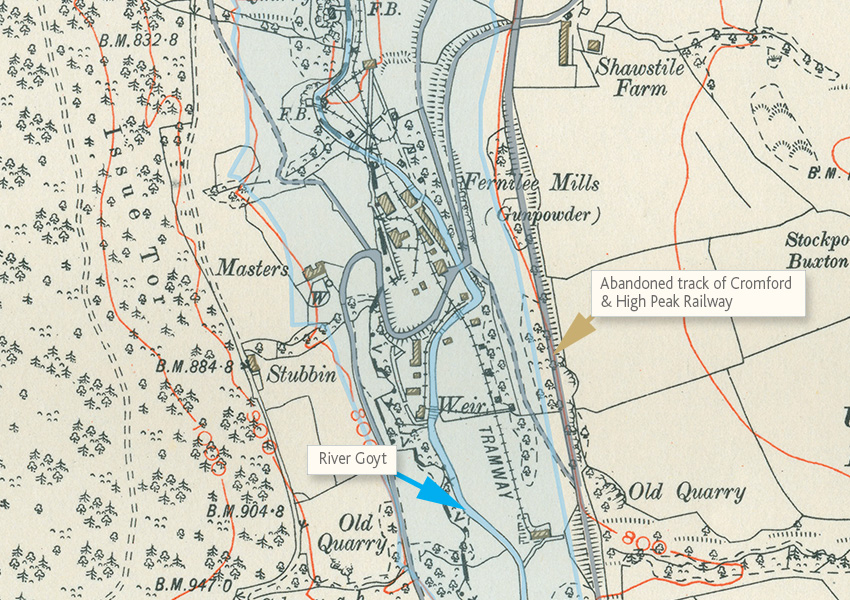 Above: This 1910 map shows the size of the powder mill (click to expand). It even has its own tramway. I’ve shown the area now under Fernilee Reservoir in blue.

This report of a visit to the Fernilee Gunpowder Mills appeared in the 4th July 1874 edition of High Peak News. The mill was the biggest employer in the Goyt Valley, and vital to the local economy. It now lies beneath the waters of Fernilee Reservoir. Click here to read more about the mill and its history.

In the valley at the foot of towering heights, clad with trees and verdure, there are situated the gunpowder mills, of Jas. Hall Williamson, & Co., known as the Fernilee Gunpowder Mills, occupying a very extensive area, and so situate as to be quite out of danger to the surrounding district in the event of an explosion.

The works, as well as the grounds, are laid out in a very charming manner, making the visitor for the time forgetful of the dangerous material that is manufactured there. The waters of the Goyt, of which this valley is named, are wonderfully diverted so as to furnish the motive power required in the various departments; where other than human strength is needed to carry on the process.

Each place or workshop is reached by a neatly constructed tramway, made with the greatest possible care to avoid friction, as the manufactured or unmanufactured article is conveyed from one place to another. Underneath the shadow of a high hill is erected the principal magazine for the storage of the material as it is made. It is strongly built, quite dry, and has double doors for safety.

The workmen on entering are provided with a pair of elastic shoes without nails, in order to avoid any friction, which might lead to an explosion.

Passing along the tramway a little further, there are a group of three incorporating mills, having millstones of six tons weight each, driven by a small water-wheel. Here the grains are ground down to their proper consistency. A little further there is a separating house protected by a strong breast wall, to break the force of an explosion, should one occur.

Near the charcoal house there is a gun or mortar, from which a shot weighing 61lb can be thrown a great distance. It is used for the trial of powder as is manufactured. 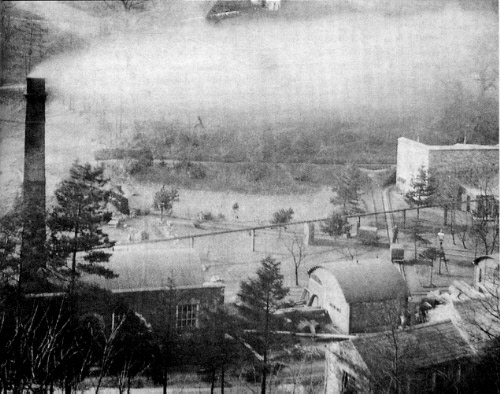 Above: This rare photo shows the powder mill in full production, with smoke belching from the tall chimney and a wagon on the small tramway. I’m not sure what the raised line running across the photo would have carried.

Driven by a large water-wheel is the corning and granulating house, with an interior not unlike that of a corn mill, except the colour, and the smell. In this place India rubber shoes have to be worn.

There is also a store room for oil, candles, &c., barrel stores, cooperage shops, mechanics’ and smiths’ workshops, all fitted up conveniently. There are also a couple of exceedingly powerful incorporating mills, worked by water power on an entirely new principle.

The shafts are so secured by coverings of metal that their motions can hardly be seen, however closely watched. The greatest care is taken in all the operations.

There are also the ‘wort charge’ house, a store house, a hydraulic press house, and at the back of the office a neatly fitted up bath and wash house for the use of the begrimed workmen, who can thus, either with hot or cold water, cleanse themselves from the grimy substance by which they have become covered before returning to their homes.

Situated by itself is the weighing house, where the powder is weighed and packed into the barrels, and made ready for storage or for sale. An air of neatness appears spread throughout the whole of the multitudinous works, and the neat little office situated near the entrance gates.

The works are reached by a long winding walk from the Buxton highway on the one hand, and a carriage drive leading from Errwood Hall on the other. The spot is well worth a visit either from the lover of nature, or of human skill and judgement.

It was visited by the tremendous floods some two or three years ago, when great damage was done along the entire valley.

Click here to read more about the mill and the accidental explosions that took so many workers’ lives. There’s also lots of information, as well as more photographs of the powder mill, on the Whaley Bridge Local History website.