The line that never was

Above: A 1941 newspaper article explains how Samuel Grimshawe blocked plans to build a passenger rail link through the Goyt Valley.

Many thanks to Raph for forwarding a newspaper clipping he discovered from 1941 titled ‘The line that never was’. It seems there were once plans to build a Manchester to London railway line through the valley, demolishing Errwood Hall in the process. I’m still struggling to discover the full facts as it’s a bit of a confusing story. Here’s the newspaper article…

Built about 1840, out of stone quarried on the site, Errwood Hall had fine lofty rooms, a wide stone staircase; over the servants’ quarters was a small chapel, beautifully embellished. Above the hall a burial ground containing a vault, was the last resting place of the Grimshaws, who became converted from the Established Church to that of Rome.

Something in those days might have changed the face of the Goyt Valley – the coming of a railway – a project to which the Grimshaws did not take kindly like many other landowners of their time. If the railway from Whaley Bridge through the Goyt Valley had materialised you would have heard a porter calling “Taxal” at the first stop and “Burbage” at the next.

Imagine such a journey – as the train now rattles along (window down) the sweet chimes of Taxal church peal across the valley. There you would see blue tits skimming the silvery stream, a water hen preening in a shallow bank, lambs frolicking at Goyt’s Bridge, over the hill the lark’s first song of spring, and all the sylvan beauty of the valley down to Bonsal.

Every mile of the journey unfolds farmiliar places – there’s magic in the names we used to know – Overton, Knipe, Madscar, Oldfield, Nook and Normanwood. But I am going too fast, in a ghost train that never had steam on a line that wasn’t there. The railway came not that way – and yet it nearly did!

A station-master at Whaley Bridge, the late Mr Holmes senior, told me he had seen at Hunts Bank, Manchester, the plans to take the railway through the Goyt Valley when the line was extended from Whaley Bridge to Buxton. It was a very near thing (said Mr Holmes). The Grimshaws would not support the scheme for a railway in the valley.

One wonders what would have happened if that alone had stood in the way of the plans, which were withdrawn in favour of a line taking the big loop to Chapel South and for the lime traffic at Dove Holes on the run to Buxton. 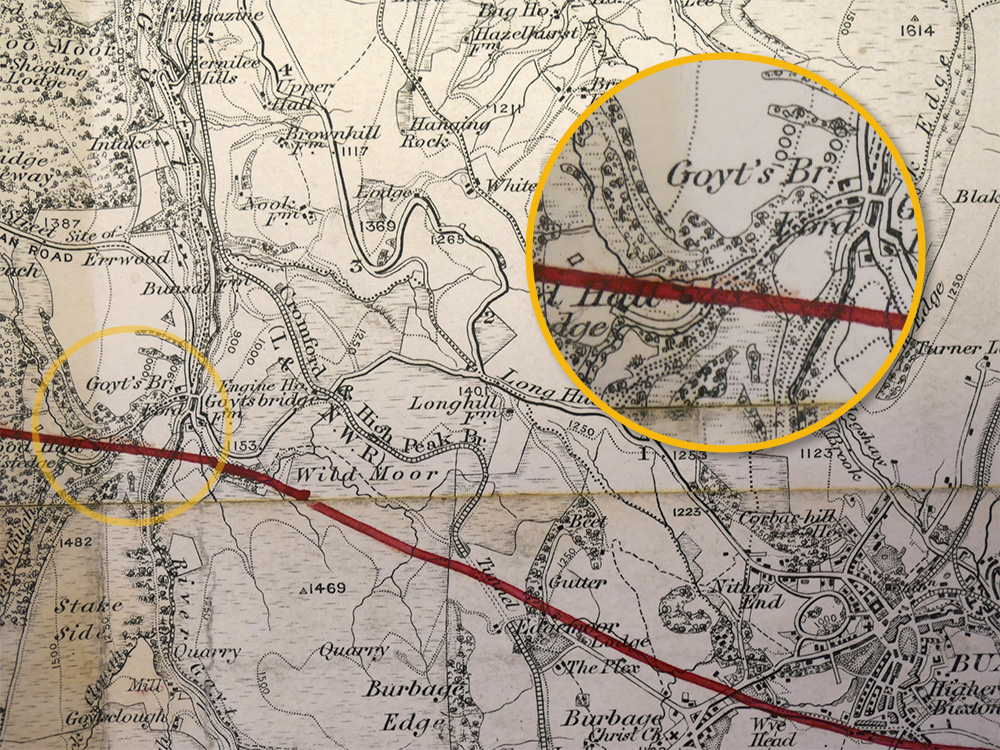 Raph also sent me this 1 inch map showing the route of the proposed line running right through Errwood Hall (click to enlarge). But this must have been a different line to the one mentioned in the article, as it joins Buxton and Macclesfield, rather than Manchester to London via Whaley Bridge.

There’s lots of information about local railways on David Easton’s Furness Vale History Society’s blog, including this article from the High Peak News from 1941, the same year as the one above…

“It is interesting to learn that but for the obstinate refusal of a local landowner to move with the times a hundred years ago, Whaley Bridge might have been the Crewe of the North.

When the Manchester to London railway was first planned it was hoped to build it through the Goyt Valley, and had this scheme materialised Whaley Bridge would have become the main railway junction. But Mr Grimshaw, of Errwood Hall, refused to have such a devilish invention as the railway running through his land, and so the plan had to be drastically revised.

In these days, when a main railway junction is regarded by the enemy as a legitimate objective*, one feels inclined to bless the unprogesssiveness of that Victorian Grimshaw.” [*The risk of being bombed by German aircraft when the article was published in 1940.]

As the proposed route for the LDEC railway appears to pass ‘through’ Errwood Hall it is perhaps not surprising that Mr Grimshawe objected!”

Raph says he’d be happy to help anyone discover the full facts; “There’s lots of other information in the Derbyshire Record Office, the National Railway Museum, the British Newspaper Archive, etc, including the support(!) of the major landowners, the benefit of taking the railway through the Goyt (to the Errwood gunpowder factory), the location of the tunnels, etc.

“Of course, primarily due to the engineering challenges of such a route and the high costs, etc, the Macclesfield to Buxton section of this railway was never built. The map shown above is available in Derbyshire Record Office; LD&ECR Ref:  Q/RP2/252 (1890) & Ref:  Q/RP2/223 (1890).”

If anyone fancies taking up Raph’s challenge, or can provide any more information, please get in touch by either leaving a comment below, or using the contact page.