Above: The views opened up by last year’s tree-felling are already starting to vanish, as the newly planted firs shoot up.

It’s now a year since the Forestry Commission started work on tackling the tree disease phytofra in the valley by felling great swathes of larch on the slopes to the west of Fernilee. I was really hoping they wouldn’t replant them as it’s opened up some wonderful views across the reservoir.

It would also have allowed the more attractive native broadleaf trees to grow and flourish, with sunlight reaching the floor and encouraging a far more vibrant and abundant range of plant and animal to thrive. Rather than the dark and dense firs under which very little seems to survive.

But it seems my hopes were in vain. I walked the top track the other day and the replanting is already well underway. And I don’t think it will be long before the dense plantations of larch once more block out the views. Which I think is a great pity. And an even bigger waste of a great opportunity to rewild the valley.

An organisation called ‘Rewilding Britain’ is pressing the government to make Britain’s national parks wilder. Their website explains that there’s less woodland cover in the Peak District than Leeds. It also says that the UK has been ranked a very unimpressive 189 out of 218 countries for its quality of nature.

This video gives a good description of the issues we face, many of which can be seen in the Goyt Valley, such as the problems caused by creating a mono-culture like heather for grouse-shooting, and the dense and regimented planting of non-native trees like firs. 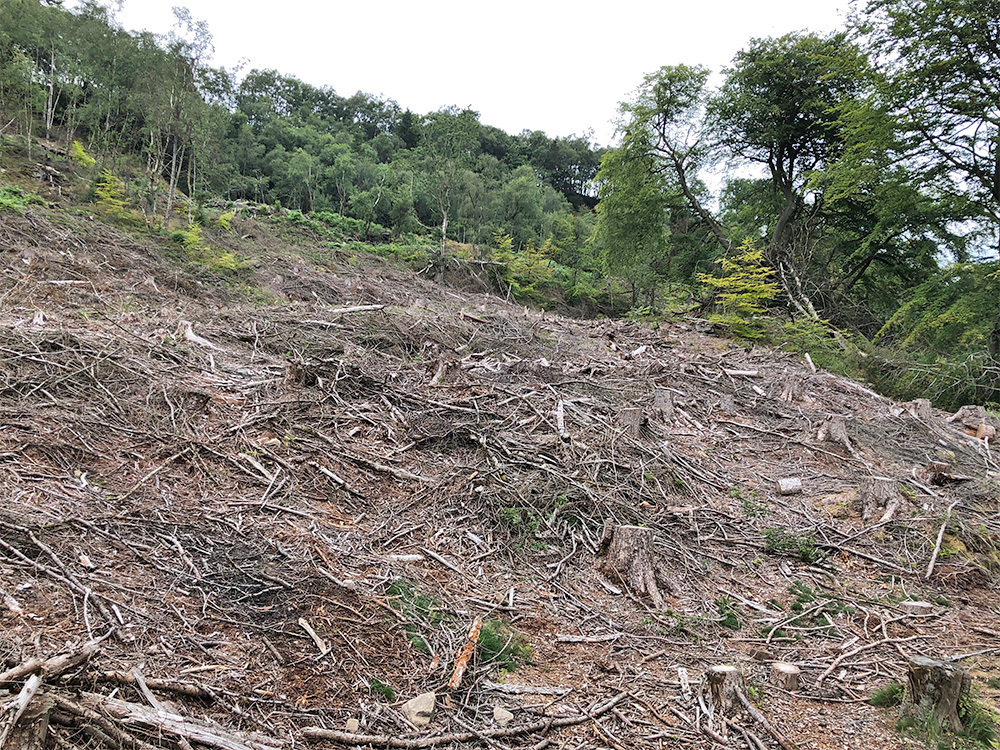 Above: The other gripe I have with the Forestry Commission is how they’ve left the slopes following last year’s tree felling. I was hoping they’d have cleared all the branches and brushwood to allow the landscape to recover. But it seems that’s not very high on their list of priorities.

Dan Pincott from Forestry England (previously called the Forestry Commission) has responded to my concerns about replanting the recently cleared areas in the  valley. Click here to read his message.