Above: Macclesfield Bank stood at the junction of Chestergate and Market Place.

It was here that money stolen during William Wood’s brutal murder eventually ended up.

Further testimony from the trial of Joseph Dale for the murder of William Wood. The previous post reported witness statements from the day of the murder. The story now moves to Macclesfield, where Dale and his two co-accused fled on the following day…

Ellen Broadhurst was landlady of the Golden Lion in Macclesfield…

…on Thursday morning the 17th of July, some men came into her house at nine or ten in the morning, two young men came in first, and one followed in a short time.  The man that came in last went out, and in a little while returned with a paper parcel.

The witness here detailed their putting on the new stockings and half-boots, and said that the man who had come in with no shoes, put on those which the man in the pillow fustain jacket took off.

He and the young in the pillow fustain jacket asked leave to go into a room to change their cloathes; the prisoner changed his, he had on a blue coat and trowsers when he came down stairs.

Q. What became of the old ones?

A. There were cloathes left in her room; a black coat, striped waistcoat, and two pairs of trowsers, and a muslin handkerchief, torn; the cloathes in which he appeared were new. The two then went out and left the other.

She saw Frost, the constable, in the house that day, but does not remember at what time. Frost asked for the cloathes left by the young men.

…saw the prisoner at his shop on the 17th July, soon after breakfast; he asked for a pair of pumps. Witness said he had none but what were too large for him, but could have a pair for him in an hour. He then asked for quarter boot, and bought a pair, and then purchased another pair.

There was a poor boy at the door, and prisoner said “I’ll give these things to some poor person.” Witness said if he had any thing to give, he could not do better than give them to the poor lad at the door, for he was without father and mother in comparison.

He was in witness’s shop two or three times, and he gave the lad a blue coat and shoes and stockings. When he bought the boots he paid for them and went away; but first witness went with him to Burgess and Bradshaw’s shop, and left him there, and did not see him afterwards till he …

… for the others; returned in a few minutes for his own, and took them; then came again, dressed in them, and said he wanted a coat and waistcoat to make up the suit, which he said were for his brother, and wanted a suit for a cousin.

These he purchased, and paid for them in a £5 Derby Old Bank note, which witness had with him. (The note was produced, and sworn as the one received from the prisoner).

A short time after he returned with a man a little lustier than himself, to change the coat and trowsers he had purchased, said they were too large.

Witness thought these were the cloathes they had purchased for a brother, they changed the cloathes, and shortly after the second man and another more slender than either of the two first, and said they wanted each a great coat.

These they paid for in a £5 Bank of England note. Prisoner paid altogether about £9 5s. 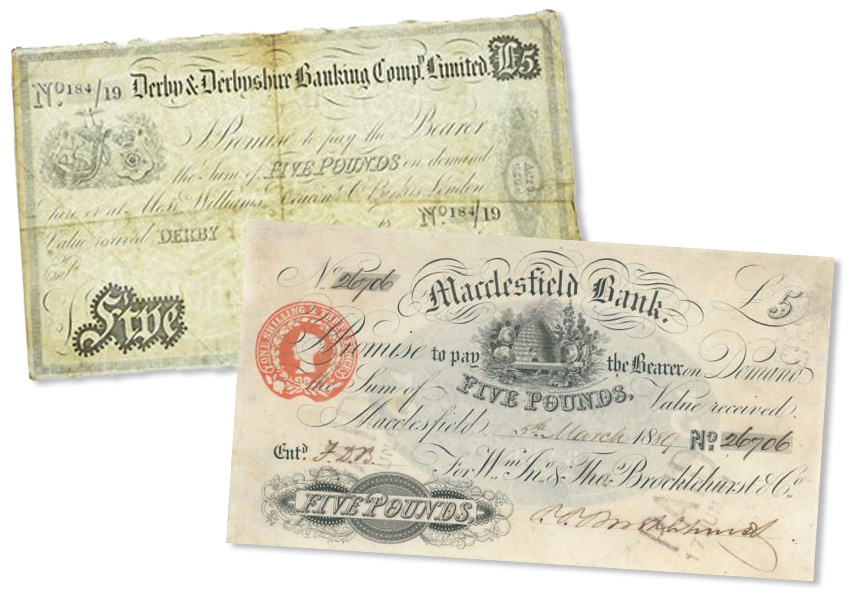 Above: £5 notes issued by both Derby Bank and Macclesfield Bank. These would have been very similar to the ones stolen from William Wood.

John Longstaff was an apprentice to Mr Latham, a Macclesfield watchmaker…

On the 17th July, two men in blue coats, blue trowsers, and yellow waistcoats, came to his master’s shop, and he sold them each a watch; the one paid for his watch in a Macclesfield note and 7s in silver; the other, the taller, paid in a £5 Bank of England note.

Witness took the note to Brocklehurst’s Bank to get changed, leaving the two young men in the shop, and Elizabeth Tomlinson, the house-keeper, with them; received the change in Macclesfield notes.

Elizabeth Tomlinson was house-maker to Latham, the watchmaker…

Was in the shop when Longstaff sold the two watches, and corroborated the evidence of Longstaff: The prisoner is one of the persons who was there, he was the taller of the two.

George Hankinson was clerk to the Macclesfield Bank…

…received a £5 Bank of England note from Longstaff on the 17th of July; it was No. 721; he changed it into Macclesfield notes; knew it by a mark he put upon it, a number which he entered immediately, vix. 10771; they always copy notes of £5 and upwards.

It was first put amongst other notes, he found it out by its number, knows it also by the tear, and depends upon both for its identity. Could have sworn to the note by the tear.