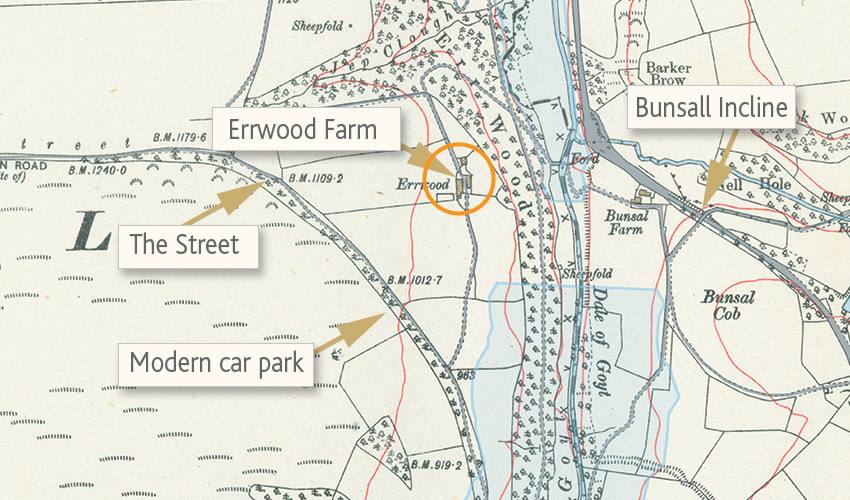 Above: This 1907 map (click to enlarge) shows where Errwood Farm once stood. The blue shaded area shows the twin reservoirs today. I’ve also marked the position of the main car park.

Above: An old photo of Errwood Farm superimposed on the same spot today (click to enlarge). My thanks to George for sending it.

Click here to view a ‘then and now’ fade of the old and new photos.

Above: This photo is one of very few I’ve found of the farmhouses that were demolished in 1934. It’s possible to find some remains if you walk from the main car park towards Fernilee Reservoir, go though the small gate, and then head diagonally left up the slope.

The first recorded tenant of Errwood Farm was Daniel Rose in the 1851 census. But it was his son-in-law, Thomas Swindells, who seems to have been the farmer. Errwood Farm was one of the largest on the estate, and the family could afford a servant, Sarah Capwell.

Gerald Hancock, author of ‘Goyt Valley Romance’, thought that Samuel Grimshawe’s son – also called Samuel – may have stayed here whilst supervising the construction of Errwood Hall in the early 1840s.

The Swindells were followed by the Ferns family. And then the Hibberts and the Brocklehursts.

John Hibbert was recorded living here in 1891, together with his younger brother, Joseph, and sister, Ellen. By 1901 he was living by by himself. And in 1911, following his parent’s death, he had moved back to Bunsal Farm to join is brother and sister. John’s brother was Thomas Bennett Hibbert (see ‘Tracing TB Hibbert‘).

I’m not sure if the Brocklehursts were the last tenants of Errwood Farm. I received a message some time ago from Sarah Dugdale who thought her grandparents, George and Edith Dugdale, may have lived here with their three children. (Click for details.)

Gail has managed to track down the press clipping above dated 2nd August 1929 showing that the Dugdales were advertising holiday lets at Errwood Farmhouse for 2 guineas a week. So it’s likely they were the last tenants before the farmhouse was demolished in the 1930s.

15.3.22: Click here to read about the years Errwood Farmhouse served as a Youth Hostel.