Above: Servants and staff pictured on the drive, outside Errwood Hall. Many would have been at the party described here. The only faces I can identify so far are Mr Wiles the Butler (far left), and his wife, the Housekeeper (seated at front). Errwood Estate Agent, Mr Olyazabal, stands at the back, looking away from the camera. 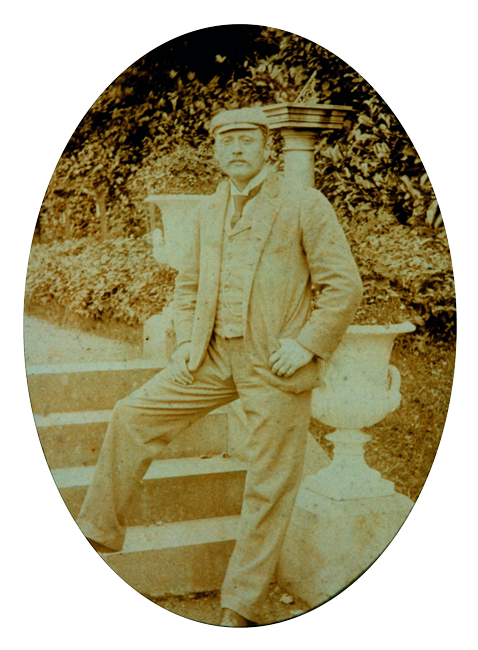 The party was hosted by the two Grimshawe sisters; Mary (who was still unmarried at this time), and Genevieve, together with her husband, Captain Preston (above).
The Grimshawe family seem to have been genuinely well respected by their tenants. This letter is dated 1895 and is from Ann Bailey, who then lived at Fernilee Hall Farm, to her mother in Macclesfield. It’s taken from Gerald Hancock’s ‘Goyt Valley Romance’;

“Have you seen the grand party we have had at Errwood Hall? It is in the Macclesfield paper (below). I shall save all the news till I see you. I was never at such a party before in my life. I wish you could have seen it, over a hundred of us. We were invited for five o’clock and we stayed until four the next morning.”

The tenants and others assembled at the Hall for five o’clock. For the first portion of the evening, they were entertained with a lantern exhibition. The views were illustrative of the Prince of Wales’ journey from Custon to New York and also of the Prince’s Indian tour.

Dinner was then served in the spacious dining hall. The tables were beautifully decorated with flowers &c., the work of the Hon. Mrs E. Preston and the proceedings were enlivened by music.

Among those present, in addition to the tenantry were Father McKenna and Miss Gaskell of Ingersley Hall. After dinner had been partaken of, dancing was indulged in, Miss Grimshawe opening. This continued until four o’clock next morning. Everyone heartily enjoyed the evening.