Dr Michala Hulme is an award-winning historian and professional genealogist based at the University of Birmingham.

Many thanks to historian and genealogist Michala Hulme for allowing me to reproduce her recent post on the history of the famous Cat & Fiddle Inn, perched high on windswept moorland near the source of the River Goyt…

If you are familiar with the Peak District, you may have heard of the Cat and Fiddle, as it is situated on the infamous snaking road between Macclesfield and Buxton and is one of the highest public houses in England, standing at 1689 ft above sea level.

Some reports state that it was built in 1813; however, I think it was built slightly later in 1826, three years after the road to Buxton was complete. The Inn was created by a local silk merchant named John Ryle, who bought the plot of land because it was adjacent to a new turnpike road.

It appears that Ryle only had the property for a few years – in 1831, it was put up for auction. At the time of the sale, the publican was a local widow called Mrs Wain. The property also came with a croft that Mrs Marchington occupied.

By the time the first census was published in 1841, Mrs Wain had died, and her son John, yes you read right… John Wain was the new licensee. Also living at the address was his twin brother Edward Wain and Priscilla Ollerenshaw, who John later married on 23rd August 1841.

It is probably worth noting that whoever took over the Inn also took over a 12-acre farm, which explains why John Wain could give up the pub and apply his trade as a farmer. 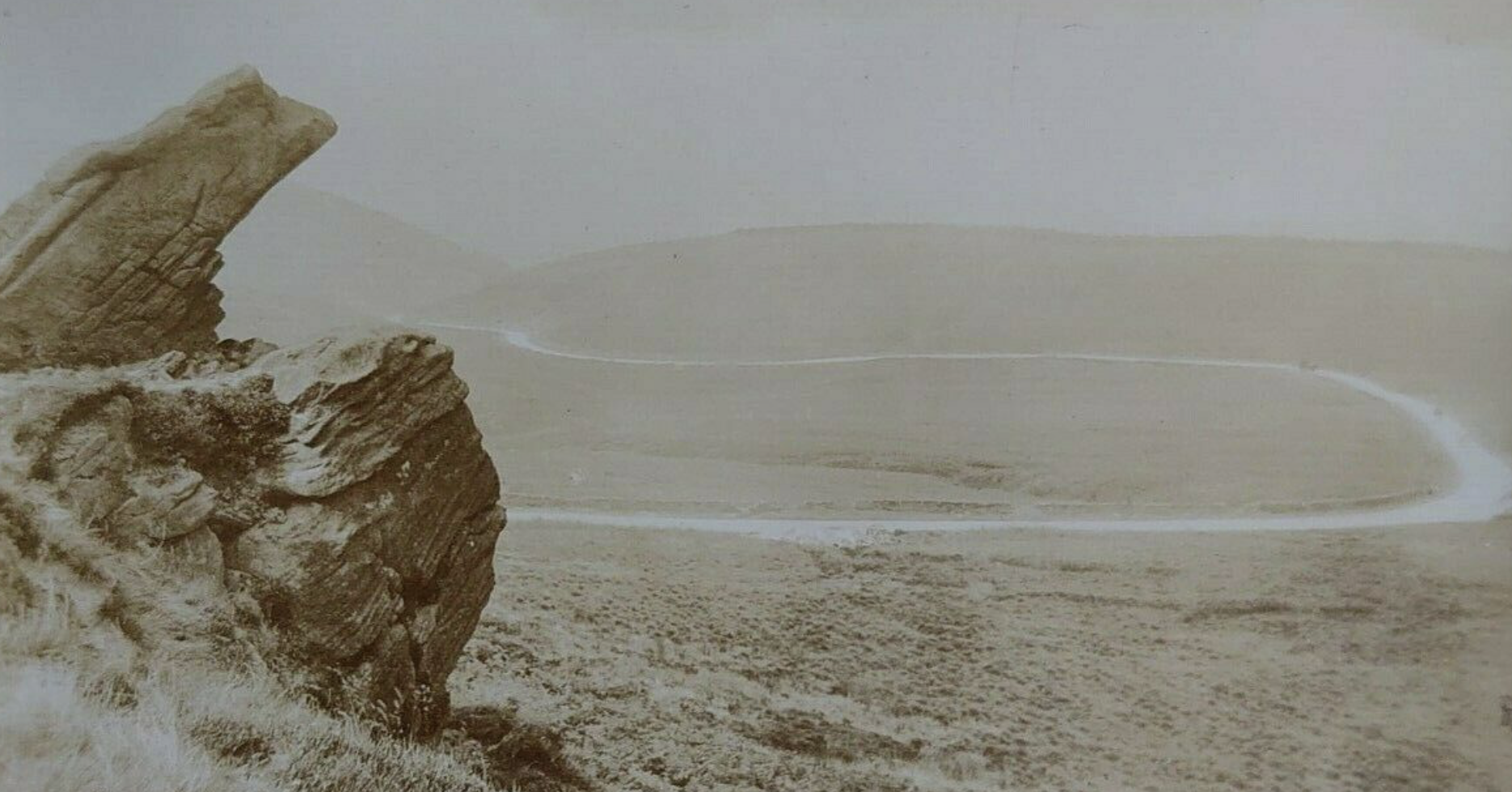 An old image of the unforgiving moors that surround the Cat and Fiddle.

While the Wains were still living at the pub, a body was discovered on the moors. It later transpired that the body was that of 18-year-old Henry Critchley. Critchley and two other men were travelling from Buxton to Macclesfield when the weather took a turn for the worse. The temperatures plummeted, and heavy sleet began battering the moors.

Having drifted throughout the night, the men discovered a derelict house where they took refuge, hoping to move on when it was light, and the weather had changed. Critchley boasted to his two friends that he could finish the journey to Macclesfield. He then set off back onto the bleak moors. Sadly, he had underestimated the extreme weather. His lifeless body was discovered the following day by a carter, close to the Cat and Fiddle.

In 1861, the publican of the Cat and Fiddle Inn was a 49-year-old widower named Thomas Cottrell and his 25-year-old daughter Ann. Visiting on the night of the 1861 census was a carter named Joseph Wilshaw and a Sarah Allen. Joseph Wilshaw is likely a relation of Mary Wilshaw, a former servant of the Cottrell family. By the following census, the property had changed hands again. The grave of the Trueman family.

The new publican was 36-year-old Joseph Trueman and his wife, Elizabeth. The family’s time at the Inn was marred with tragedy. In 1871, the couple’s five-year-old daughter Frances Ann died of ‘congestion of the brain’. She would be the first person to be buried in a family plot in St Stephen’s Church, Macclesfield Forest.

Eleven years after the death of Frances, the family went through more heartache when, in 1882, Joseph Trueman committed suicide. The day of his death started like any other, with the servants waking early to go and milk the cows. Upon their return, they discovered Joseph hanging from a rope in one of the outbuildings.

He was immediately cut down; however, he was pronounced dead at the scene. Joseph was reported in the press as a popular man and was widely known as the pub’s landlord. He was buried with his daughter Frances Ann.

Two years after Joseph’s death, the pub was in the press again; this time, it was because a local man named Isaac Coulston had been brought up at the Petty Sessions in Buxton. His crime was taking passengers in his cab from Buxton to the Cat and Fiddle without a license.

He charged his passengers 1s. 9d each for the journey. Knowing that he shouldn’t be taking passengers without a permit, he told his passengers that he was only the driver and not the cab owner. Coulston was refused a licence because he wasn’t a resident ratepayer. He was fined 10s. and costs was told that he must qualify for a license.

During the 1880s and most of the 1890s, Elizabeth Trueman was the publican of the Cat and Fiddle. Due to the death of her husband, she was now in charge of both the pub and the farm.

The 1901 census reveals that Elizabeth had moved to a farm in the neighbouring district of Goyts Bridge. Also living with her are her three youngest children: William, Martha and Amos. Sadly, Elizabeth died seven years after the census was taken; she was 76 years old. She is buried with her husband and daughter in the family grave. 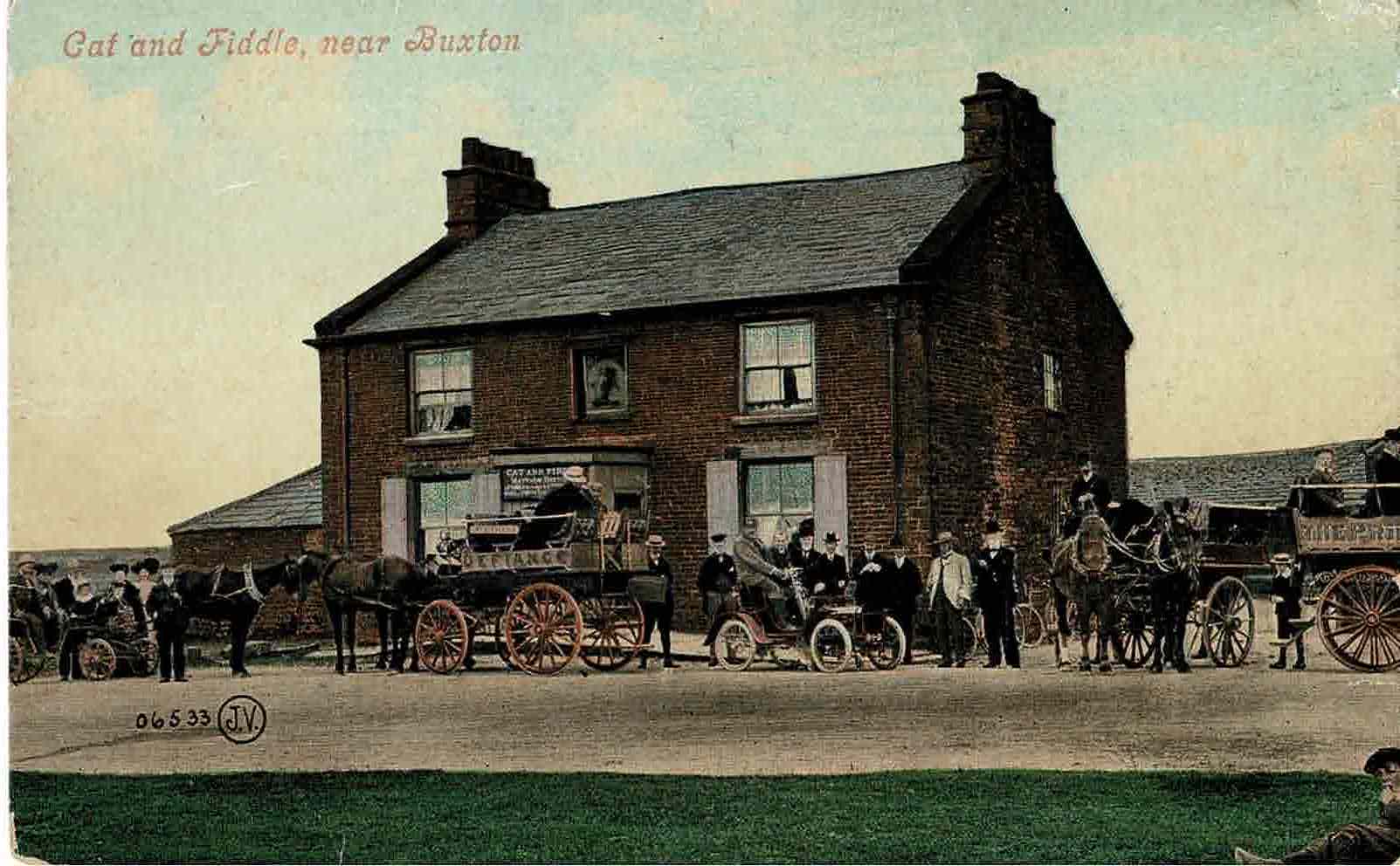 While Elizabeth Trueman was still living at the Inn, a young couple named Georgiana Martin and Matthew Beetham married in a suburb of Manchester. A few months after the wedding, the couple left England to start a new life in Australia. They settled in Sydney and Queensland, where they welcomed two girls: Ethel and Ella Annie.

They stayed in Australia until 1896, when Georgiana decided to travel back to the UK. She made the 75-day journey with her two young daughters, arriving back on 15th October 1896. Matthew returned three years later.

Sometime between 1896-1901, 48-year-old Matthew Beetham and Georgiana took over the running of the Cat and Fiddle. The 1901 census reveals that the couple lived there with their two daughters, who worked as barmaids, and a groom named Albert Wilshaw. The couple left the pub in 1912 and moved to Staffordshire, close to Matthew’s family. The license was subsequently transferred to a Caroline Partington on 17 October 1912. 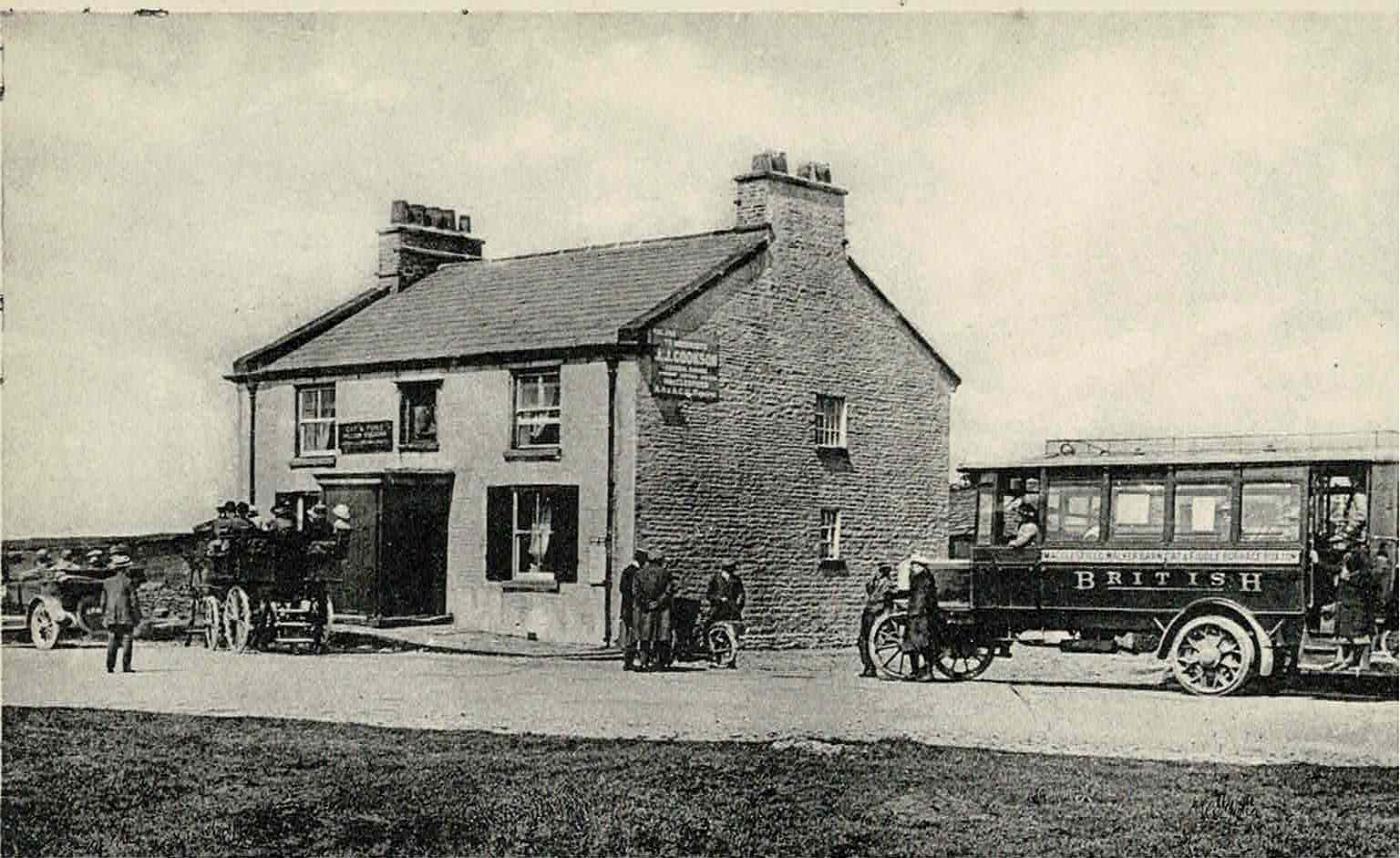 She was found sleeping by a brook and claimed to be a ‘tramp’. She was taken to Strangeways gaol, where it was confirmed that the ‘tramp’, who had given a different name, was actually Miss Armstrong. After discovering her true identity, she was transferred back to the Macclesfield Asylum. 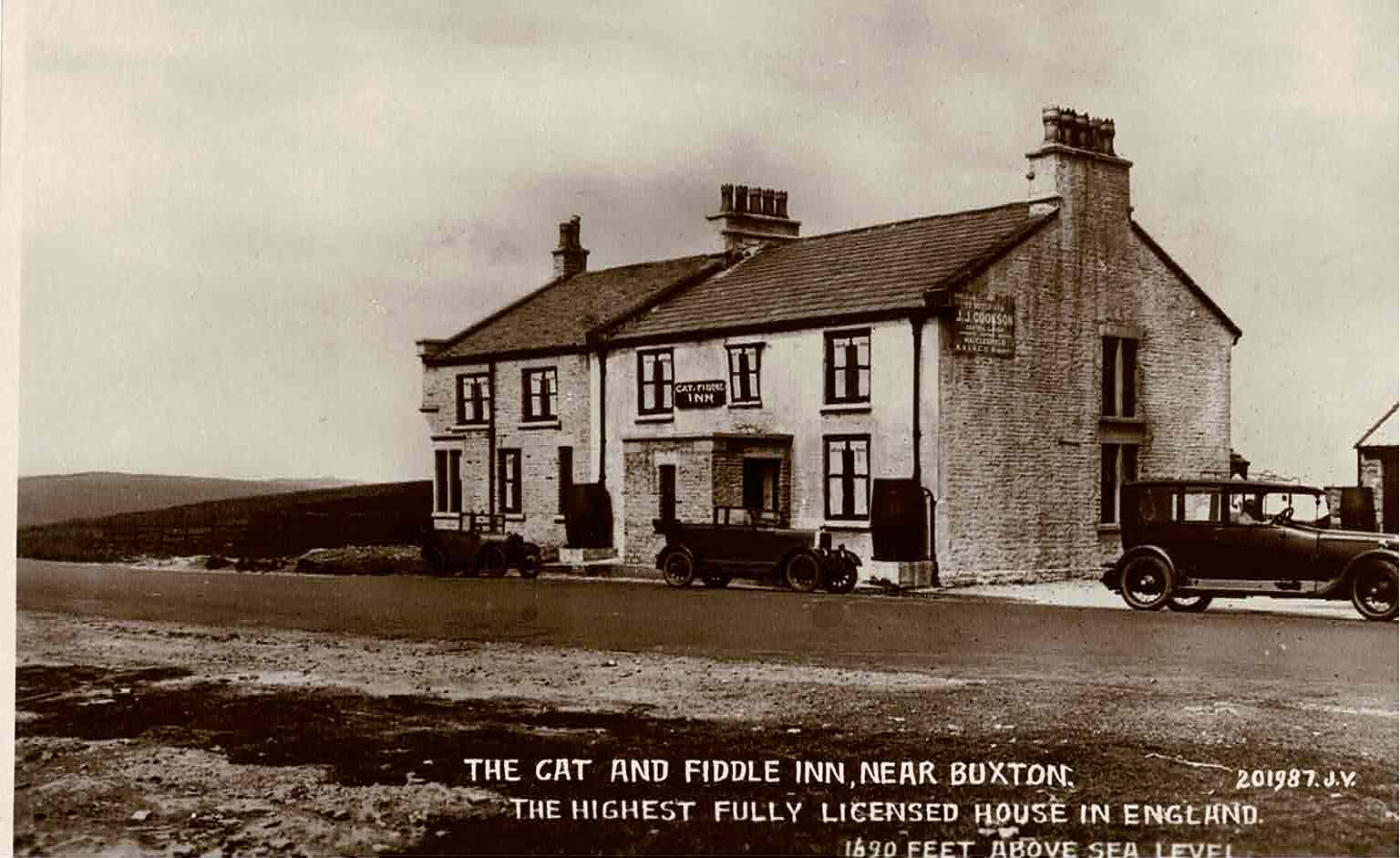 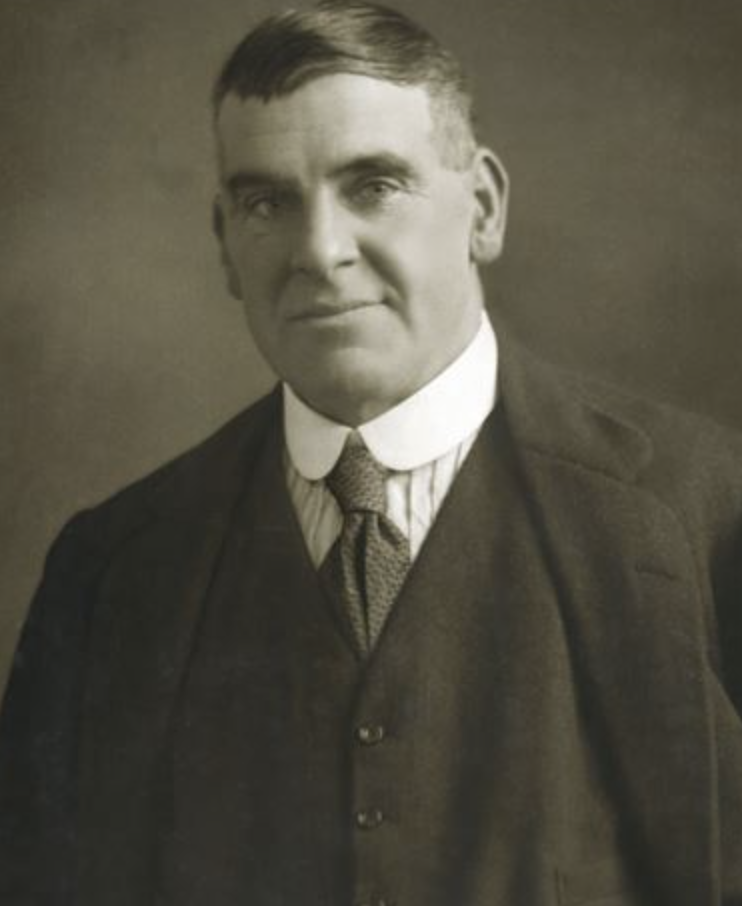 By the time this image was taken, you can see that the Inn has been extended to the left of the main building

In 1918, it was reported in the Times newspaper that the Cat and Fiddle was to close. The Mayors of Buxton and Macclesfield spoke to the owner, a Misses Grimshaw of Errwood Hall, and they came to a ‘satisfactory agreement’.

That same year a long lease was taken out by Herbert Frood from Buxton, who was the inventor of the brake pad. He stated that after the war, he was going to rebuild the Inn along the lines of a Swiss chalet, providing ‘first-class accommodation for motorists and residential visitors’. When Frood advertised the tenancy, he had over 400 applicants, eventually awarding it to W. Kinghorn of the Wheatsheaf Hotel, Macclesfield.

The Inn was never converted into a Swiss chalet; however, in 1925, the publican, Mr Cook, was granted planning permission to perform considerable alterations. That same year, he spoke in the local press about the extreme weather, claiming that the snow during the winter months reached the top bedroom windows! (image).

In 1937, 15 people were stranded in the Inn when the weather took a turn for the worse. It took 28 hours for a snowplough to be able to reach them. The licensee kept the group entertained with cards and gossip. In 1940, the pub was again effectively cut off from civilisation. The licensee James Clark and his wife Dorothy, her mother and a friend were left to survive on tinned fruit for a whole week!!