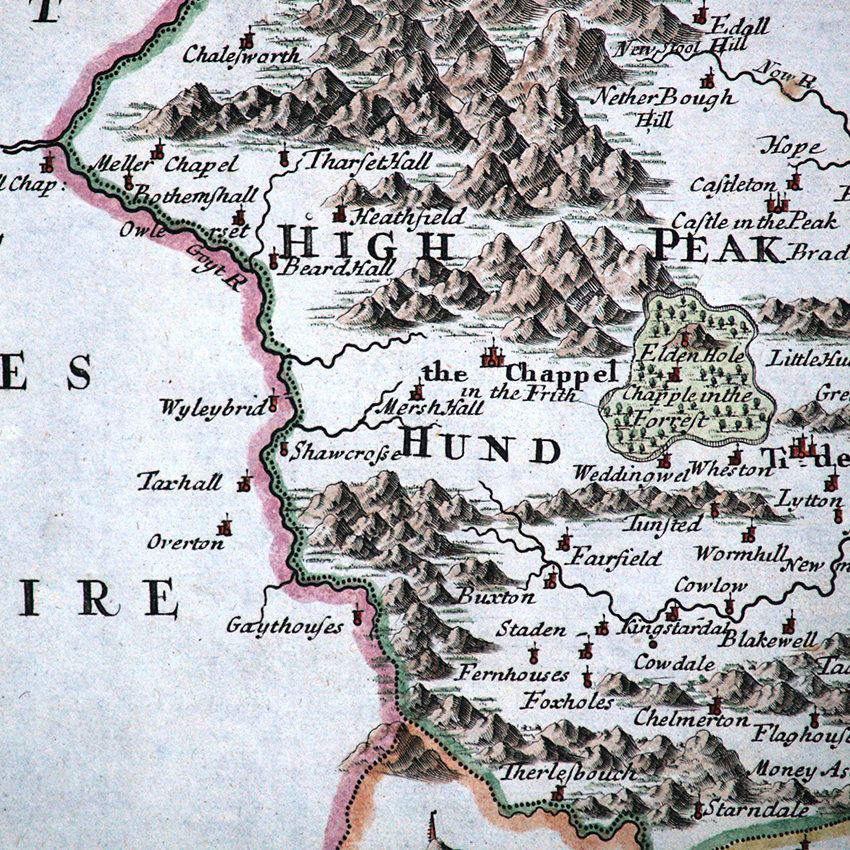 This Derbyshire map is by Robert Morden. Morden was commissioned to produce revised county maps in a more modern style for a new edition of Camden’s ‘Britannia’, to replace those of Kip and Hole which were looking dated.

The restyling was successful, but the cartography was based on John Speed (who had followed Saxton), rather than any new survey work. Morden did make some attempts at revision. He added roads to his maps, using Ogilby’s Britannia as his source.

He also sent base copies of other county maps deemed to be the most up to date and correct to “the most knowing gentlemen in each county” who were asked to check and advise him of any errors.

This exercise yielded mixed results. It did result in a good number of changes to the spelling of place names (many of which came in too late for the first edition of 1695, but which were included in the next edition of 1722).

Occasionally it provided new information or corrected errors, but in other cases the information provided was erronious or ambiguous and led to new mistakes.

A typical example occurs on the Derbyshire map where previous spelling of Goythouses now becomes Gaythouses. This may just have been a misreading by the engraver, or it could have been an erroneous ‘correction’ by one of Morden’s less-knowing correspondents.

There were five ‘Gibson’ editions of Camden’s Britannia using Morden’s map; the last in 1772. This was not quite the end of the story. A further new edition of the work was brought out in 1779, with a new English translation and again with new, modern maps – this time by John Cary.