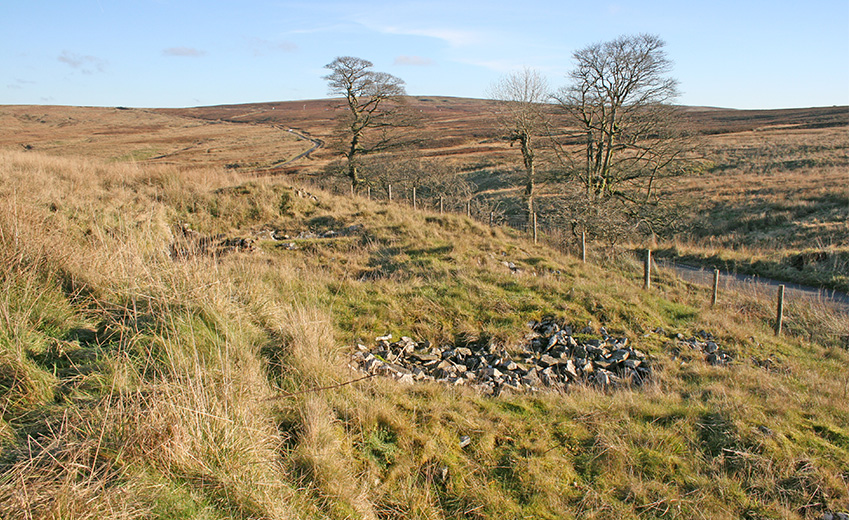 Above: All that remains of Marchington Farmhouse (click to enlarge).
Above: This photo shows the Macclesfield Old Road as it snakes from The Cat & Fiddle pub (about 1/4 mile to the left), through Derbyshire Bridge, and over the horizon towards Buxton. It’s just possible to make out the narrow road from Derbyshire Bridge to Goyt’s Bridge, running horizontally to the left.

Marchington Farm was the first of four houses on this short stretch of the old Macclesfield to Buxton road. The others were Moss House, Moss Hall and Goyt’s Moss Farm. All were demolished in the 1930s, although Goyt’s Moss Farm was later rebuilt as a National Park Rangers’ centre, and now stands beside the small car park at Derbyshire Bridge.

The top photo is the only one I’ve managed to find of Marchington Farm (circled). I did try to discover if anything remains of the building, but all I could find was a flat area surrounded by a few dressed stones, all of which were slowly vanishing under the damp, moorland vegetation (see left).

My thanks to Mike for sending me the census records below which list some of the families who once lived, worked – and possibly mined for coal – in this exposed part of the Cheshire Derbyshire border. They must have been a hardy breed!

Page update: Rob Marchington has been in touch to say that his family lived at the farm for many generations. Click here to read his story.