Above: This early 1900s OS map (click to enlarge) shows the house lying at the junction of the C&HPR track and The Valentine which rises up to Long Hill. The area shaded in pale blue shows Fernilee Reservoir today.

In 2019 I posted a series of photos showing a house at the northern end of the Goyt Valley that I struggled to identify.  The photos were taken in the early 1930s, just before work started on Fernilee Reservoir (click to view).

It was Bill Brocklehurst – a farmer brought up in the valley – who identified it as Lower Lodge; one of two houses that lay at either end of The Valentine – the lane that now runs down from Long Hill to Fernilee Reservoir.

Chris Simpson, who once lived in Fernilee, also recognised the house. He got in touch to say:

This is most definitely Bottom – or Lower Lodge as it used to be called. In 1891 it was also described in the Census as ‘Powder Mill Road Railway Crossing Bottom Lodge’. Matthew Wilson lived there with his family and he was a railway worker.

This section of the Railway closed the year after. I have always known it as Bottom Lodge. I presume it was there for the specific duty of making sure there were no collisions between gunpowder and rail, although there were not that many trains. But of course it must have had some input from the Grimshawes. 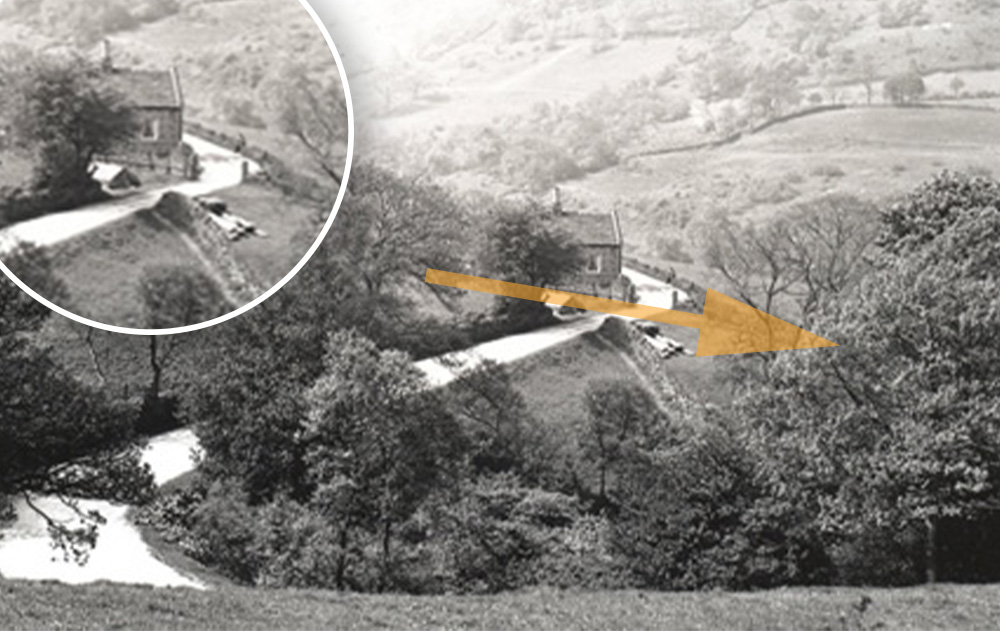 Above: The railway line had been disused for some 40 years when this photo was taken (click to enlarge), and it’s difficult to make out exactly where it once ran. I first thought it was hidden behind the hedge to the left of The Valentine. But looking at the old OS map below, I think the orange arrow shows the correct direction, running from left (south) to north (right).

It’s just possible to make out a fence in front of the house (it’s clearer on the inset), which must have bordered the railway track. The map shows the track passing over a raised embankment for a short section, running north from the house (to the right). It’s difficult to see this on the photo, which made me wonder whether I’d plotted it correctly. But I think it must be the angle of the photo that confuses things.

Above: The blue arrow on this ‘then & now fade’ shows where I think the photographer would have been standing, looking over The Valentine as it curves down the slope. Fading to today’s satellite view shows the northern end of the reservoir, with cars parked along the bottom of the lane.

As Chris wrote, the house would probably have served as home to the level-crossing keeper, during the years when the Cromford & High Peak Railway line ran through the valley – between 1831 and 1892. Traffic from the nearby gunpowder mill across the track would have created too great a hazard, even for those pre-health & safety times!

The census records from the earliest I can find in 1851 to 1881 show that it was home to the Jodrell family. But it’s odd that James, the head of the family, is only described as a labourer and sawyer (wood cutter). And it’s only on the 1891 census that the head of the next family to live here – Matthew Wilson – is described as a railway servant.

*Someone kindly sent me the census records for both Bottom Lodge and Upper Lodge, but I’m afraid I can’t remember who it was. So apologies for not being able to include an acknowledgement. Whoever it was also added this note:

The names of the Lodges and their order in the returns change but they’re always recognisable. The 1901 returns seem to join them with Errwood Farm but I think that’s because they come after Errwood Farm on the return. They were definitely the lodges for Errwood Hall. The 1891, 1901 and 1911 returns give the number of rooms – four for Upper Lodge in all returns, though for Bottom Lodge it’s three in 1891 and two in 1901 and 1911.

These may have been small cottages bursting at the seams with people in the 19th century, but the Goyt Valley was a fairly healthy place to live, probably because of a clean water supply. Poor little Sarah Ann Jodrell seems to be the only clear victim of infant mortality.

Most, if not all the children got at least a few years schooling, up to age 9. And finally, the males mostly depended on the gunpowder works and railway in the valley, or the bleach works in Whaley, for employment.