Above: I think this photo was taken at the same time as the 1932 cine film of Goyt’s Bridge (click to view).

Click on any of the photos below to enlarge. 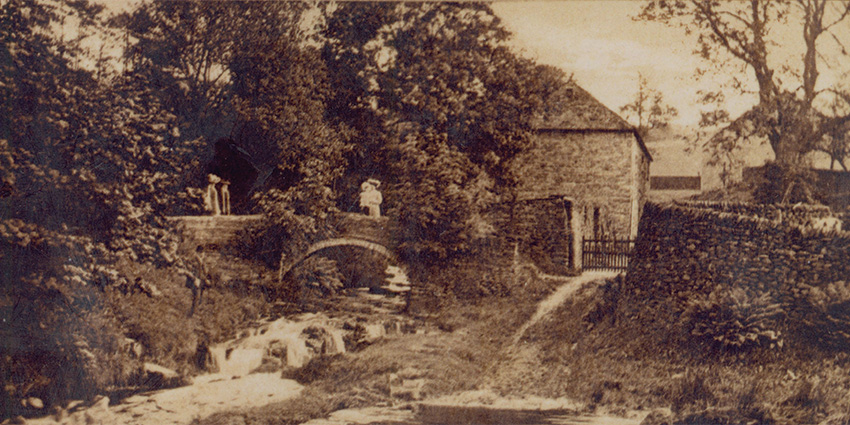 Above: This is the oldest photo I’ve seen of the bridge, with a footpath leading up to a gate into Goytshead Farm. (The illustration shows the same view.)

It looks like it may have been taken in the 1890s – or even earlier. In the later photos below, the road has been extended through into the farmyard. 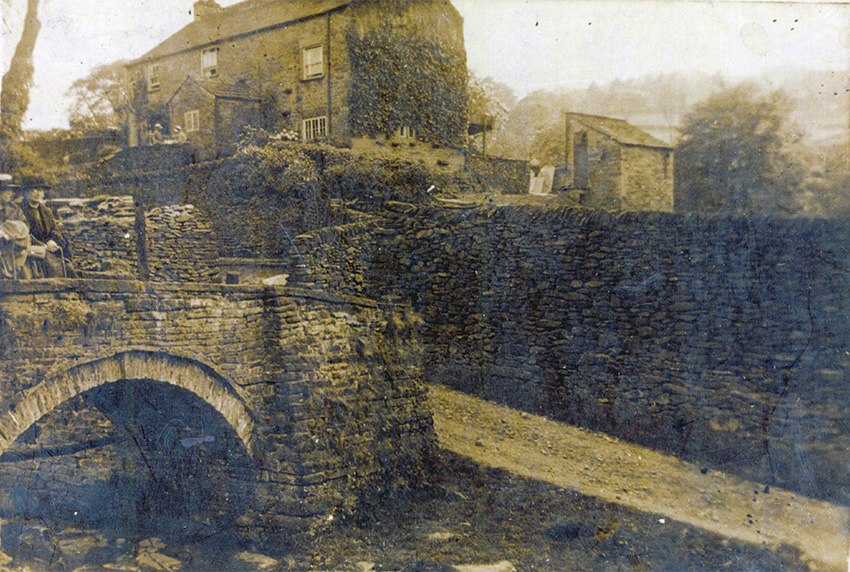 Above: Two ladies in their wide-brimmed hats sit on the bridge parapet admiring the view. In the background, it’s just possible to make out a couple of other ladies enjoying tea in the cafe at Goytshead Farm. 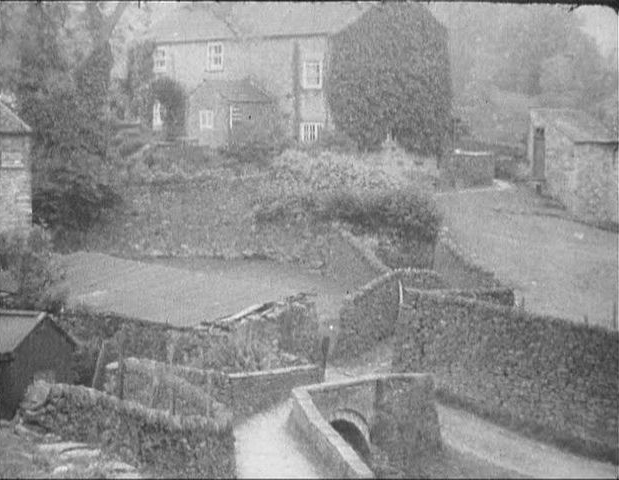 Above: This looks like a fairly late view; perhaps not long before the buildings were demolished in 1934. 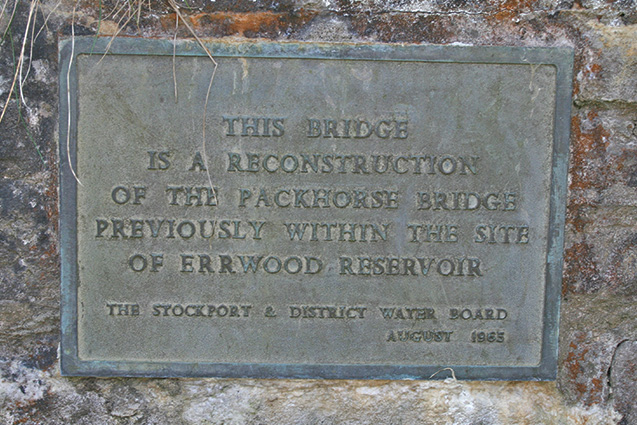 Above: A small plaque beside the bridge explains that it was rebuilt here in 1965 during the construction of the reservoir. 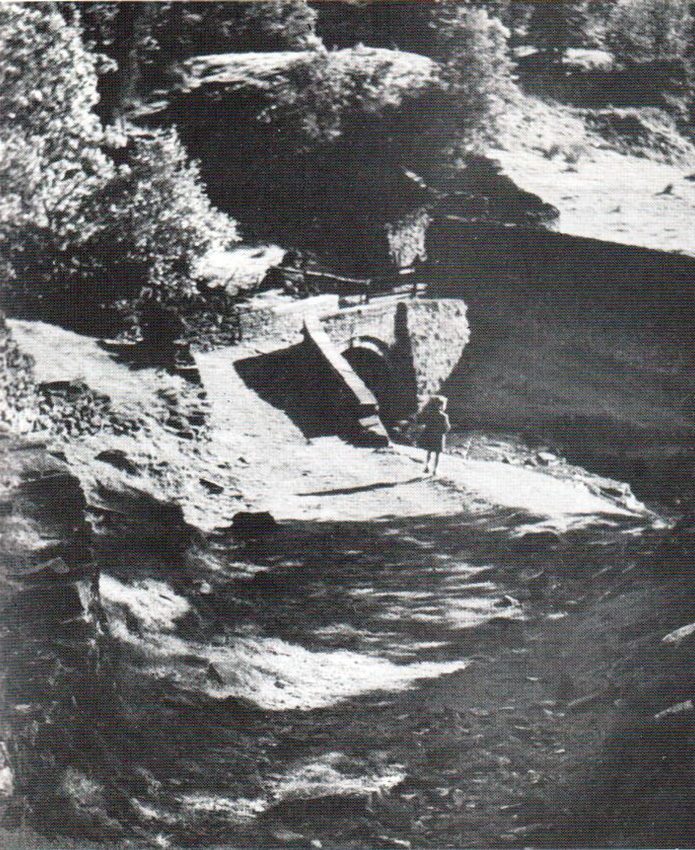 Above: The only photo I’ve seen showing the Packhorse Bridge after all the buildings in Goyt’s Bridge had been demolished. It was taken in 1950.

The packhorse bridge which once stood in the heart of Goyt’s Bridge would have been many centuries old. It stood at an important crossing point between ancient trading routes which ran through the valley to the north, as well as from east to west.

The track from high on the moors at Derbyshire Bridge, through Goyt’s Bridge, and then on towards Macclesfield along the old Roman road, would have been used by merchants transporting everything from salt and spices to household goods and building materials since medieval times – and probably long before.

Above: Most photos – and the wonderful colour illustration below – have been taken looking south from the centre of Goyt’s Bridge, up towards the buildings of Goytshead Farm. I’ve shown the direction of view on the map above with a green arrow.

On the illustration below, the Goyt is flowing from the right across the ford, to join Wildsmorestone Brook which flows under the packhorse bridge. Goytsbridge Farm is on the left, and Goytshead Farm on the right. 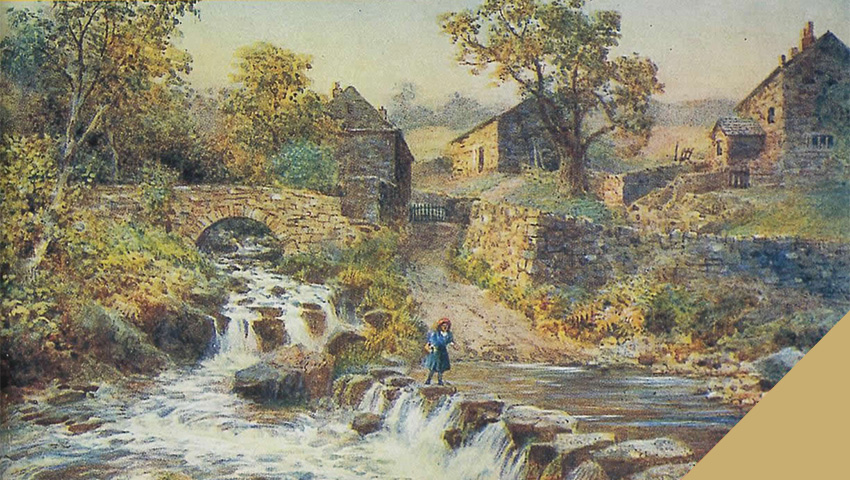 Above: This wonderful illustration will have featured on an early tourist postcard. But the girl is completely out of proportion. In reality, the stepping stones were much smaller and less precarious.

When Victorians first discovered the picturesque charms of the Goyt Valley, the packhorse bridge became a popular subject for both artists and then photographers.

But whereas the rest of Goyt’s Bridge has vanished beneath the waters of Errwood reservoir, the small bridge has miraculously survived. Although not many people who pass it on the road to Derbyshire Bridge may realise it. 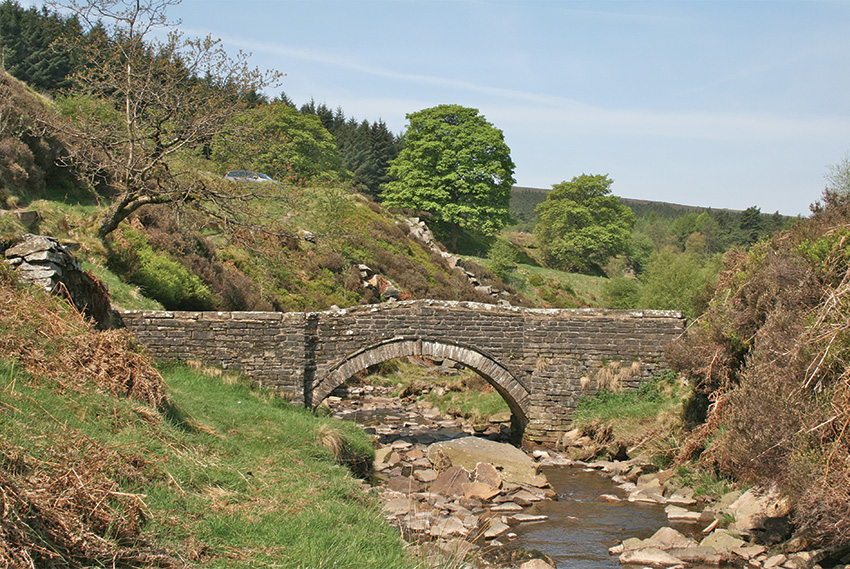 Above: The packhorse bridge now stands across the Goyt alongside the one-way road between Derbyshire Bridge and Errwood Reservoir. 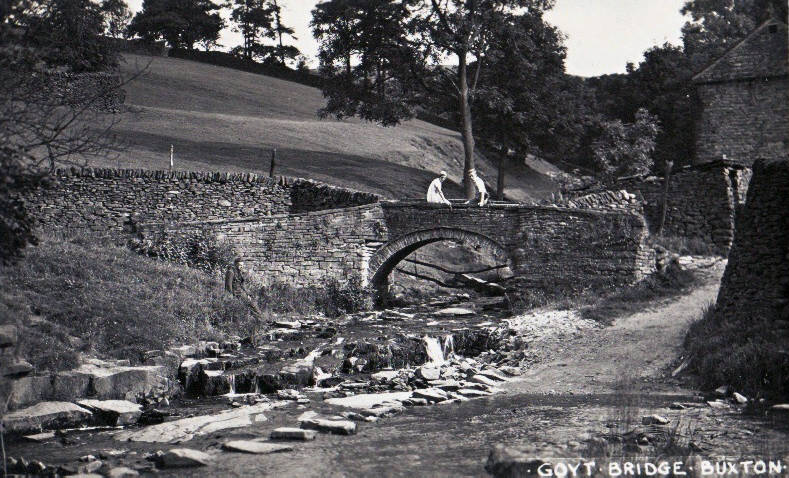 Above: The bridge shortly before it was dismantled and moved.

Above: This photo shows what looks like a small wooden footbridge on the right over the Goyt as it runs into Wildmoorestone Brook. I haven’t seen this in any other photos. But it would have made a much safer crossing than the stepping stones – particularly when the Goyt was in full flow, or the stones icy.