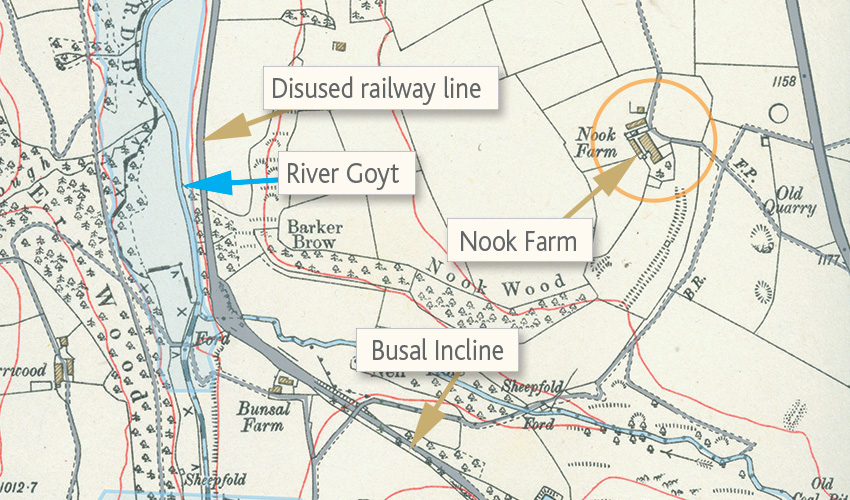 Above: This 1890 map (click to enlarge) shows that Nook Farmhouse was relatively large, compared to other nearby farms, such as Bunsal and Errwood.

Above: This charming photo – which probably dates to the early 1990s – shows a well-dressed group posing outside Nook Farmhouse (with one in the doorway). From the census returns, I would guess that they are the Joules family, although the chap in the Panama hat doesn’t look like the typical Derbyshire farmer!

Lying close the the Buxton to Whaley Bridge ‘Long Hill’ road, Nook Farm was one of the largest farms on the Errwood Estate, stretching to some 240 acres. I haven’t yet tried to search for the ruins, so I’m not sure whether anything remains of the farm buildings.

The earliest census records from 1861 show that Thomas Dunn was the farmer, with his wife Naomi. And that they employed three servants who worked on the farm and in the house. Their son, George, took over the farm sometime between the 1881 and 1891 censuses.

By the time of the next census in 1901, the farmer was Joseph Joule. He and his wife Grace lived here with their four sons, three daughters, and Grace’s mother.

I would guess that the top photo shows the Joules family; possibly Joseph and his wife Grace sitting, with Grace’s mother, Sarah, standing, and one of their sons and daughters. Grace appears to be laughing at something.

Click here to read about the untimely death of Mr. Dunn of Nook Farm in a tragic horse and trap accident outside Longhill Farm in 1884.