Samuel II of Errwood Hall, Taxal, and Mill Bank, Manchester, died on the 27th January 1851. An extract from his will, made 13th December 1848, bequested to his son in law, John Upton Gaskell of Ingersley Hall, and his Manchester solicitor, the sum of £5,000 to be invested in government stock, bonds etc., in trust to the benefit of his wife Ann Grimshawe, the remainder to be divided between his son Samuel III and daughter Margaret Elizabeth Gaskell.

He also requested that his house and grounds at Mill Bank be kept up and maintained for his wife, with the remainder of the estate to his son, Samuel III. However, since his wife’s death there was a codical to the will dated 2nd August 1840. ‘Whereas my wife Ann Grimshawe has since departed this life and I have since given my daughter Margaret Elizabeth Gaskell the sum of £2,500, the bequests formerly made to them are hereby revoked. Furthermore my dwellinghouse, outbuildings, offices and premises in King Street, Manchester to go to my daughter Margaret, in lieu of the £2,000 granted to her under her marriage settlement’.

The estate – valued at about £14,000 – went to his son, Samuel III. The founder and builder of Errwood Hall, at the age of 83, had now gone, but he had realised his ambition of a gentleman’s country seat, in probably one of the most romantic locations in Cheshire.

Hardly had the family overcome the passing of old Samuel than the young infant, Samuel Arthur Hope Grimshawe IV died at the age of fifteen months. He died on the 4th August 1851 at the Hall, the cause of death given as enteritis. One can only guess of the pain of such a tragic loss that must have been felt not only in the family, but throughout the whole of the Errwood estate.

Errwood Hall, which in those early years lay just inside the boundary of Cheshire, was designed by Alexander Beresford Hope, (Hon. PRIBA 1829-87) who inherited Beresford Hall, Staffordshire from his kinsman, Field Marshall Viscount Beresford. It was one of this gifted amateurs earliest buildings, being built from c.1840.

Beresford Hope, politician, ecclesiologist and amateur architect, (like his father Thomas) was chiefly remembered for building in Gothic, though Errwood was Italianate with Norman details. The Hall was a turreted, double winged structure of millstone grit sandstone, of some Italian style, with a central tower and a chapel, which formed the upper storey of an extension to the northern end. A French window opened onto a terraced garden at the southern end, with wide steps leading up to the main entrance. The Hall faced east towards Long Hill on the Buxton to Stockport road.

Over the front door was the crest of the Grimshawe’s, a dragon and a small coat of arms. In the garden stood a large ornamented stone arch surmounted by a bird and a large G, its remains now long gone, where it stood among the small fountain and flower beds. High in a window in the central tower there was always a crucifix with a lamp shilling before it. From here must have been the best view of all looking over the trees and down to Goyt’s Bridge. 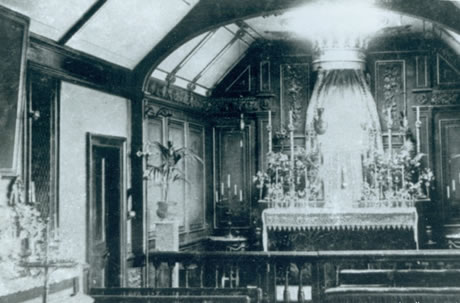 A rare photo taken inside the hall – of the catholic chapel

By now in 1851, the Grimshawe family were well established at the Hall and had acquired nine servants. It was at this time that Samuel Grimshawe III declared his conversion to Catholicism, and had the upper storey of the northern extension of the Hall made into a private catholic chapel. He was received into the Church as Samuel Dominic Grimshawe.

Dedicated to St. Mary, the chapel was concecrated on the 8th October 1851 by the Bishop of the Diocese in the presence of about five hundred persons from Macclesfield and the neighbourhood. The bishop, James Brown, was the first catholic bishop of Shrewsbury and he preached to the crowd in the open air. The first resident chaplain at the Hall was Henry Allcock.

In the 1851 census, Samuel Grimshawe III gave his profession as ‘Land Proprietor’ and it is known that property was bought at this time in neighbouring Manchester and its suburbs. There are places in Levenshulme which bear history the Grimshawe name, ‘Errwood Road’ being just one. There is little doubt that they were indeed a very wealthy family.

On the 7th December 1851, Samuel and his wife Jessie were blessed with a daughter, Mary Ambrose Jemina Louisa, who was born at Errwood Hall. She was baptized at St. Albans Church, Macclesfield on the 2nd February 1851 by John Hall. The godfather was Rev. J. E. Manning and the godmother Lady Louisa Stewart. One year later a second daughter was born, Anna Genevieve Marie, in Paris, when the family were on a visit to France.

By 1861 Samuel Grimshawe III had become a county magistrate for Derby and Chester, and was maintaining quite a sizeable cosmopolitan household. The daughters Mary and Genevieve, had their own young ladies maid and a German governess from Munich, while there was a French butler, several Irish maids, gardeners, and a Lancashire cook. There was also a visiting artist, W.H. Bower, who may have been involved in portrait work. 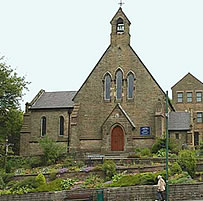 Samuel Grimshawe III became very generous to the catholic church, not least in the year 1860 when he gave £l00 towards the cost of St. Annes Church at Buxton. On the 9th February it is recorded Mr. & Mrs. Grimshawe subscribed £500 towards the cost of a new Church at Stockport. Then on the 4th August 1860, the laying of the foundation stone of St. Anne’s Church, Buxton, by Genevieve Grimshawe when seven years old.

The health of Samuel Grimshawe and his family was proposed during the dinner that followed the ceremony, which was at Errwood Hall. At this time the catholic church was hard-pressed for funds to maintain its services to a growing congregation, and the support of an eminent county magistrate, with the wealth and position of Samuel Grimshawe III, was no doubt most welcome.

The young Grimshawe daughters would have had a good education, for apart from the excellent governess, they were surrounded at Errwood Hall by an absolute wealth of books. It was Anthony Powell who said ‘books do furnish a room’, and this was certainly the case here, books in the study, the upstairs sitting room and eleven more cupboards in other places.

Volume after volume, from Lewis Carroll, Hans Christen Anderson to Bronte, Shakespeare and Ruskin, with many language books, especially Spanish, German, and French. There were lots of Charles Dickens with many of them first editions, in fact books on every subject. Travel books too were a great highlight of the library, the Nile, Africa, ‘How I found Livingstone’. ‘Round the World, ‘Cook’s Voyages’ and many more.